From Tehran to Tokyo, U.S. Geo-Strategic Shifts in Motion 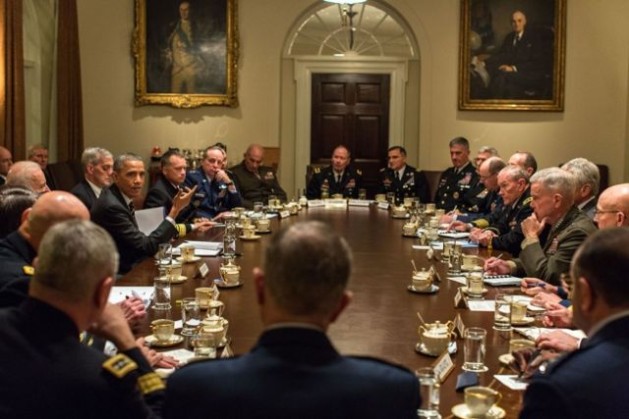 WASHINGTON, Nov 29 2013 (IPS) - From the Middle East to the East China Sea, the last week’s events have offered a particularly vivid example of the much-heralded shift in foreign policy priorities under the administration of President Barack Obama.

Just four days ago, the U.S. and its P5+1 partners (U.S., Britain, France, Russia, and China plus Germany) announced a historic agreement with Iran on its nuclear programme, an accord that many analysts believe could pave the way for an eventual strategic rapprochement between Washington and Tehran.

Obama is determined to minimise U.S. military commitments and resources in the Greater Middle East to free them up for use elsewhere.

Predictably, the accord came under sharp criticism from Washington’s closest Mideast allies, especially Israel and its hawkish supporters here, as the latest and most worrisome example of Obama’s “weakness” and “appeasement” in dealing with Washington’s deadliest foes.

Just two days later, the administration sent two B-52 bombers over disputed islands in the East China Sea to demonstrate its solidarity with its East Asian allies in defiance of Beijing’s declaration earlier in the week of a new “air defence identification zone” (ADIZ) over the area.

That show of force drew praise from, among others, the ultra-hawkish Wall Street Journal which two days before had led the chorus of criticism against the Iran deal.

In the meantime, Obama’s national security adviser, Susan Rice, flew to Kabul to personally warn President Hamid Karzai that Washington was prepared to abandon Afghanistan to its fate after 2014 unless he signs a just-concluded long-term bilateral security agreement by Dec. 31 that would keep as many as 10,000 U.S. troops to train and advise the Afghan army and carry out missions against Al-Qaeda and its affiliates.

Taken together, the three events dramatised Washington’s eagerness to extricate itself militarily from more than a decade of war in the Greater Middle East and “pivot” its strategic focus and resources more toward the Asia/Pacific and its highly complex relationships with China and key U.S. allies there.

Because of Washington’s status as the world’s sole military superpower, such a shift necessarily reverberates strongly throughout the affected regions, forcing lesser powers to adjust their stance to protect their own interests under changing circumstances.

Those reverberations were most clearly audible in the Middle East, where Iran’s 1979 revolution reinforced pre-existing U.S. alliances with Israel and Saudi Arabia, in particular, and transformed Tehran from erstwhile strategic partner to the region’s Public Enemy Number One.

For the succeeding 34 years, Israel and the Sunni-led Gulf states enjoyed virtually unconditional U.S. support, even when their policies and actions actually undermined Washington interests – be it Israel’s settlements in the Occupied Territories or aggressive Saudi export of Wahabism – in the region. With Washington’s superpower status tipping the scales, the balance of power weighed heavily in their favour.

The accord struck between the P5+1 and Iran, however tentative, could alter that balance in fundamental ways, particularly if it develops into closer cooperation between Washington and Tehran on key issues extending from the eastern Mediterranean to the South Asian subcontinent.

For Saudi Arabia, whose government offered faint praise for the agreement but whose media has been filled with fear and trembling, the accord is particularly ominous.

“The Saudis are not merely concerned about Iran’s nuclear ambitions,” wrote Gregory Gause, a Saudi expert at the University of Vermont, in The New Yorker Tuesday. “They have a more profound fear: that geopolitical trends in the Middle East are aligning against them, threatening both their regional stature and their domestic security.

“The Saudis see an Iran that is dominant in Iraq and Lebanon, holding onto its ally in Syria, and now forging a new relationship with Washington – a rival, in short, without any obstacles to regional dominance,” according to Gause.

As for Israel, its military primacy – particularly if the interim accord blossoms into a comprehensive agreement that would effectively preclude Tehran from obtaining a nuclear weapon – is assured for the foreseeable future.

But it, too, could be negatively affected by any rapprochement between the U.S. and Iran, if for no other reason than the defusing of longstanding tensions over Tehran’s nuclear programme could refocus international attention on Israel’s occupation of Palestinian territory.

Moreover, given its relatively well-educated population of 80 million, as well as its abundant oil and gas reserves, Iran “has far more power potential than any of the other states in the region,” noted Stephen Walt, a top international relations expert at HarvardUniversity, on his foreign-policy.com blog.

Israel and Saudi Arabia are “worried that a powerful Iran would over time exert greater influence in the region, in all the ways that major powers do,” he wrote. “From the perspective of Tel Aviv and Riyadh, the goal is to try to keep Iran in a box for as long as possible – isolated, friendless, and artificially weakened.”

U.S. rapprochement with Iran and Tehran’s integration into a revised regional security structure, on the other hand, could greatly benefit Washington’s own foreign policy objectives at both the regional and global level.

Regionally, not only would such moves eliminate the possibility of yet another U.S. war against a Muslim country. Properly handled – meaning in close consultation with Washington’s current allies – they could also help quell the broader Sunni-Shia conflict that has wrought disaster in Syria and increasingly threatens to destabilise the entire region.

Over the last year – and especially since it became clear that Syrian President Bashar al-Assad had, with Tehran’s support, far more staying power than previously thought – the administration appears to have concluded that it actually needs Iran’s co-operation to stabilise the region (a conclusion seemingly shared by its ally, Turkey, which has moved quickly in recent weeks toward its own rapprochement with Iran).

Indeed, an intensification and spread of the Sunni-Shia conflict seriously threatens Obama’s strategy of extricating the U.S. from the region – or, more precisely, resuming the role of “off-shore balancer” that it played with considerable success from 1945 to 1990, according to Walt. As the civil war in Syria has shown, Iran, despite its isolation and weakened economy, remains influential enough to spoil those hopes.

But cooperation with Iran as part of a larger off-shore balancing strategy at the regional level is also critical to Obama’s larger strategy of implementing his Asian “pivot”. Its urgency was demonstrated by this week’s Chinese ADIZ declaration, the latest escalation of tensions between Beijing and its neighbours, most importantly an increasingly nationalistic Japan with which Washington has a mutual defence treaty.

Since the pivot – or “rebalancing” – was first announced by then-Secretary of State Hillary Clinton two years ago, its credibility has suffered from the perception, particularly among Asian analysts themselves, that Washington remained too preoccupied with the Greater Middle East – including Afghanistan, the pressure to intervene in Syria, and, above all, the threat of war with Iran – to be taken seriously.

But, taken in combination, September’s last-minute U.S.-Russian accord that effectively averted a U.S. strike against Syria, last week’s nuclear agreement with Iran, and Rice’s message to Karzai clearly convey the message Obama is indeed determined to minimise U.S. military commitments and resources in the region to free them up for use elsewhere.

In that context, Tuesday’s B-52 flights over the Senkaku/Diaoyu islands appeared designed to highlight that impression.