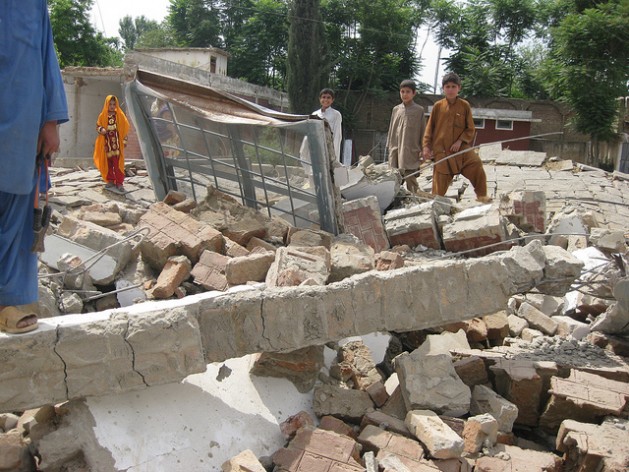 A school bombed by the Taliban in Bajaur Agency, Afghanistan. Credit: Ashfaq Yusufzai/IPS

UNITED NATIONS, Jan 8 2014 (IPS) - After nearly 13 years of protracted negotiations, the United Nations remains deadlocked on a proposal to establish a Comprehensive Convention on International Terrorism (CCIT) – even as suicide bombings continue unabated in countries such as Iraq, Syria, Egypt, Afghanistan, and most recently, Russia.

"The urgency and gushing international enthusiasm that existed 10 years ago to conclude a comprehensive convention on terrorism is no longer readily evident." -- Amb. Palitha Kohona

With the CCIT in limbo, a divided Legal Committee of the 193-member General Assembly decided last month to establish a Working Group with a mandate to finalise the treaty as soon as possible.

Since its creation by the General Assembly in 1996, a U.N. Adhoc Committee has also been pursuing the CCIT, described as the mother of all anti-terrorism conventions.

Ambassador Palitha Kohona, chair of the Legal Committee, told IPS the proposed CCIT was intended to provide umbrella cover for situations not already addressed by 13 existing sectoral conventions on terrorism, concluded under the auspices of the United Nations.

“I would say the urgency and gushing international enthusiasm that existed 10 years ago to conclude a comprehensive convention on terrorism is no longer readily evident,” he said.

“And the will to conclude a comprehensive convention has diminished due to a gradual erosion of political will over time,” said Kohona, a former chief of the U.N. Treaty Section.

But he admits there has been marked progress by the United Nations in monitoring and coordinating counter-terrorism efforts worldwide.

Ambassador Asoke Kumar Mukerji of India, the country which initiated the proposal for a CCIT back in 1996, told IPS both the United Nations and the international community have made significant progress in combating terrorism despite the deadlock on the proposed convention.

The negotiations on the CCIT, which began in 2001, have stalled in two broad areas of dissent: the definition of what constitutes “terrorism” and the scope of the proposed convention.

“But the world cannot wait for a resolution of that discussion because every day terrorism is claiming innocent lives worldwide,” the Indian envoy warned.

In 2006, the General Assembly unanimously adopted a resolution on a global counter-terrorism strategy described as a “major development in the fight against terrorism.”

Since then, there has been greater regional and international cooperation, capacity building, intelligence-sharing, numerous regional workshops and exchange of best practices in the anti-terrorism fight.

The culmination of these efforts was the creation in 2011 of a U.N. Counter Terrorism Centre in Riyadh, with 100 million dollars in funding by Saudi Arabia.

“Every country is vulnerable to transnational terrorism,” he said, pointing out the November 2008 terrorist attacks on the Indian city of Mumbai, an economic and commercial nerve centre of India, which claimed the lives of over 160.

Asked if the lack of consensus will result in the abandonment of the proposed CCIT, he said all of the building blocks have to be housed under one roof. “That house can only be the United Nations,” said Mukerji, who was India’s chief negotiator in the GCTF.

Kohona told IPS that while the CCIT has remained divisive, there has been a wide range of other mechanisms put in place by the international community to address the scourge of terrorism, including the adoption of binding U.N. Security Council resolutions under Chapter VII of the Charter.

These include the creation of a number of bodies with specific anti-terrorism responsibilities, and the creation of mechanisms regionally and bilaterally, including on currency flows.

He said member states have also begun to cooperate more effectively with each other in addressing these issues.

“It is also evident that individual countries have developed a higher degree of confidence of their abilities to deal with this threat on their own,” Kohona said.

He said the urgency for concluding a global instrument has diminished over the years as these different and quite effective mechanisms to counter terrorism have begun to exert an increasing impact. Still, Kohona said he would rather be positive about the prospects of a convention being concluded in the future.

Terrorism continues to sow death and destruction in different parts of the world, he said. Suicide attacks, massively deployed in Sri Lanka prior to 2009, have become the weapon of choice.

“The conclusion of a convention will not only provide a U.N.-inspired umbrella to our efforts to counter terrorism, it will also send a clear message of the common will of the international community as it strives to contain and control terrorism,” Kohona said.