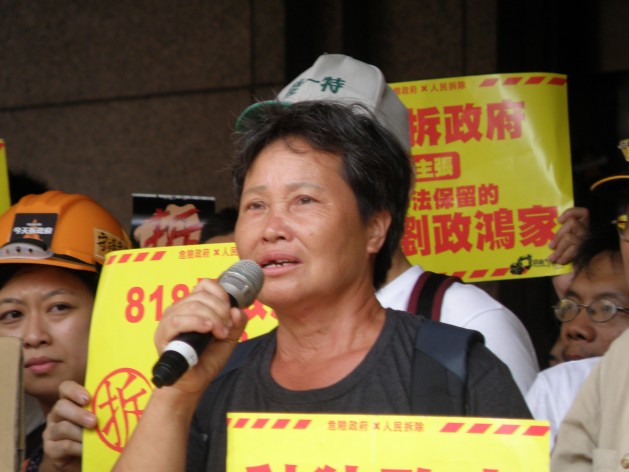 Chang Sen-wen, owner of a pharmacy in Dapu township demolished by Miaoli county government, speaking to protesters in August last year. His body was found under a bridge near his home a month later. Credit: Dennis Engbarth/IPS.

TAIPEI, Jan 20 2014 (IPS) - The Taiwan farmers victory in a landmark court case in a years-long battle has delivered a shock to government officials and given a morale boost to citizen campaigns.

The win followed a bitter resistance campaign against expropriation of farmland that has already cost two lives.

The dispute in Dapu in Miaoli county has been the most high-profile case in Taiwan of resistance to ‘zone expropriations’ in which large zones are subject to compulsory sale to government for projects which use part of the land for infrastructure and sell other portions to raise funds for construction or local government finance.

At present, there are 95 cases pending of zone expropriations involving over 7,600 hectares. Resistance campaigns are taking place over the planned expropriation of 3,000 hectares for an ‘aviation city’ near the Taiwan Taoyuan International Airport, for 447 hectares of designated farmland for a ‘knowledge-based industrial park’ in Hsinchu county, and for 236 hectares for a station on a mass rapid transit line between the airport and Taipei City.

“Many large-scale zone expropriations of excellent farmland have taken place all over Taiwan usually under the pretext of creating new towns or industrial zones without consideration of actual need, and the land is often sold for speculation,” said Taiwan Rural Front (TRF) chairman Hsu Shih-jung.

“The result is the rapid erosion of Taiwan’s best farmland,” said Hsu, adding that the verdict “exposed the ills of the zone expropriation system and is a benchmark for land justice.”

In 1999, Miaoli county government mayor Liu Cheng-hung ordered the zone expropriation of 156 hectares, mostly high quality rice fields, to expand a nearby technology park, even though the proposed optics factory there needed only 28 hectares. The expropriations proceeded despite cancellation of the optics project.

The case in Dapu made international news in June 2010 after a Taiwan citizen reporter filmed Miaoli county government excavators, protected by hundreds of police, destroying hectares of green rice paddies ready for harvesting.

Public revulsion over the destruction of the rice fields and the subsequent suicide of grandmother Chu Feng-min fuelled a protest campaign to ‘Return our Land’. The protest was led by the Dapu Self-Salvation Association and the TRF.

Despite negotiations with the central government and the legal proceedings, Miaoli county excavators, protected by hundreds of police, tore down the homes of the last four resisting households, including the pharmacy of Mr Chang Sen-wen, on Jul. 18 last year.

The TRF responded with a protest sit-in joined by more than 10,000 citizens. A month later Chang Sen-wen was found dead under a bridge near his home in an apparent suicide.

On Jan. 3, a panel of three Taichung High Administrative Court judges found that the compulsory purchase of land belonging to Ms Peng Hsiu-chun, Chang’s widow, and eight other citizens in four households and the Jul. 18 demolitions were “illegal” and voided the expropriation order approved by the Ministry of the Interior (MOI).

Lawyer Chan Shun-kuei, who represented the Dapu residents, told IPS that the MOI and the Miaoli county government were unlikely to win a reversal from the Taiwan Supreme Administrative Court.

“The MOI’s commissions on land expropriation and urban development and the Miaoli county government were unable to provide documentary evidence that there had been substantive discussion about the alternatives to expropriation or whether the expropriation was necessary for the public interest,” Chan said.

At a news conference held at the National Taiwan University Alumni Club in Taipei City shortly after the judgment, the TRF’s Hsu Shu-jung said the verdict “came too late to save grandmother Chu Feng-min and Chang Sen-wen.”

“We want our land and homes to be returned to us and for Liu Cheng-hung to apologise and explain why he forced my husband to die,” declared Peng Hsiu-chun, who added that she would apply for redress through the National Compensation Act.

Hsu told IPS that the late Chang Sen-wen had asked him, “What crime did I commit that the government is treating me in this way? What gives the government the right to decide whether I live or die?”

Citizen Congress Watch Board member and former convenor Ku Chung-hwa told IPS that “the controversies over Dapu and several other expropriations and the callous attitude of executive agencies have led judges to gradually finally realise the necessity to stress environmental rights.

“Civil society has won a battle and the government will need to pay at least some heed to the requirement for substantive and transparent hearings and may find it difficult to stonewall revision of the Land Expropriation Act,” Ku said.

Besides prohibiting further use of zone expropriations, draft revisions to the Land Expropriation Act submitted by opposition Democratic Progressive Party legislators on behalf of TRF and other civic organisations would mandate that the purpose of the law is to “protect the people’s right of survival and property rights,” mandate substantive assurance of public interest and necessity, and democratic and transparent public review.

Professor of land economics Tai Hsiu-hsiung of Taipei’s National Chengchi University told IPS that Taiwan’s excessively low tax rates had pushed local governments to use this method to first finance public infrastructure and then use zone expropriations get land for sale to improve their overall fiscal balance sheets.