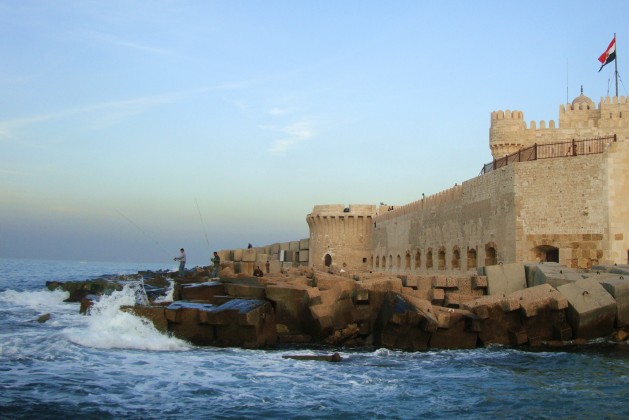 Unless barriers are built, a rise in sea level would inundate much of Egypt's Nile Delta. Credit: Cam McGrath/IPS.

EL RASHID, Egypt , Jan 29 2014 (IPS) - It only takes a light covering of seawater to render land infertile, so Mohamed Saeed keeps a close watch on the sea as it advances year after year towards his two-hectare plot of land. The young farmer, whose clover field lies just 400 metres from Egypt’s northern coast, reckons he has less than a decade before his field – and livelihood – submerges beneath the sea.

But even before that, his crops will wither and die as seawater infiltrates the local aquifer. The process has already begun, he says, clutching a handful of white-caked soil.

“The land has become sick,” says Saeed. “The soil is saline, the irrigation water is saline, and we have to use a lot of fertilisers to grow anything on it.”

“The soil is saline, the irrigation water is saline, and we have to use a lot of fertilisers to grow anything on it.”

Spread over 25,000 kilometres, the densely populated Nile Delta is the breadbasket of Egypt, accounting for two-thirds of the country’s agricultural production and home to 40 million people. Its northern flank, running 240 kilometres from Alexandria to Port Said, is one of the most vulnerable coastlines in the world, facing the triple threat of coastal erosion, saltwater infiltration, and rising sea levels.

“The total (area of the Delta) expected to be impacted by a rising of the sea level by one metre during this century will be 8,033 square kilometres, which is nearly 33 percent of the total area of the Nile Delta,” Ouda told IPS.

In a report released last September, the International Panel on Climate Change (IPCC) predicts a sea level rise of 28 to 98 centimetres by 2100, more than twice its 2007 projections. Even by the most conservative estimate, this would destroy 12.5 percent of Egypt’s cultivated areas and displace about eight million people, or nearly 10 percent of the population.

But it is not just rising sea levels that threaten Egypt’s northern coast, the delta itself is sinking.

Prior to the building of the Aswan High Dam in the 1960s, more than 120 million tonnes of silt washed down the Nile each year and accumulated in its delta. Without this annual silt flow to replenish it, the Nile Delta is shrinking – in some places the coastline is receding by as much as 175 metres a year.

The Egyptian government has attempted to slow the sea’s advance by building a series of breakwaters and earthen dykes along the northern coast and its waterways. Piles of concrete blocks help reduce coastal erosion, but without new sedimentation, the delta land has compacted and thousands of hectares now lie at sea level.

“You can build all the walls you want, but it won’t stop the seawater from advancing underground,” says Osman El-Rayis, a chemistry professor at Alexandria University. “The saltwater rots fields from below, killing plant roots and leaving behind salts (as it evaporates) that render the soil infertile.”

El-Rayis warns that as the delta substratum becomes more porous, seawater has begun to infiltrate the Nile Delta aquifer, a vital source of underground water spread over 2.5 million hectares.

Saltwater has always been a threat to coastal agricultural land, but salinity was traditionally kept in check by a steady flow of freshwater covering the soil and flushing out the salt. As Egypt’s population has expanded, upstream demand on water has increased, reducing the amount of Nile water that reaches the Delta. What does trickle in these days is choked with sewage and industrial toxins.

Faced with rising water levels and increased salinity, many farmers have abandoned their land or switched to fish farming. Others have resorted to adding sand or soil to their fields to keep them above the brackish water.

“Soil is very expensive, so many farmers buy a truckload of sand and spread it on their field then plant on top of it,” explains Saeed. “But it is difficult to grow anything on sand, so farmers have to use a lot of fertilisers.”

The sand is drawn from the dunes that line much of Egypt’s northern coast and act as natural barriers against the advancing sea. The plundering of these dunes for construction materials and fill has made the Nile Delta more vulnerable to a rise in sea level.

Scientists have proposed measures to protect the Delta lowlands from the sea’s incursion. They say the priority is to slow beach erosion by preserving natural coastal defences such as sand dunes, while building seawalls along the 240-kilometre coast that are strong enough to hold back the Mediterranean.

“These walls would be built facing the sea in places where low-lying gaps occur along the beach,” says Ouda.

He explains that in order to be effective, the barriers must include an impermeable substructure extending from three to 13 metres below sea level that prevents seawater from infiltrating freshwater aquifers.

The size is as formidable as the expected cost. One proposal submitted by Egyptian engineer Mamdouh Hamza put the price tag at three billion dollars. The plan envisions building concrete wall along the Delta’s entire coastline and skirting it with a plastic diaphragm to prevent saltwater seepage.

Ouda says the mega-project would be cost-effective in that it saves the Nile Delta lands, but it is unlikely to attract the necessary capital. He doubts Egypt’s cash-strapped government could cover the costs, while the international community appears unwilling to offer a lifeline.

“The project to establish the coastal walls is a service project…without economic gain and, thus, you will not find a financier for this project from companies or foreign governments,” Ouda says.

Yet some have argued that as Western nations are most responsible for climate change, their governments should foot the bill on behalf of the developing nations most impacted by its consequences.