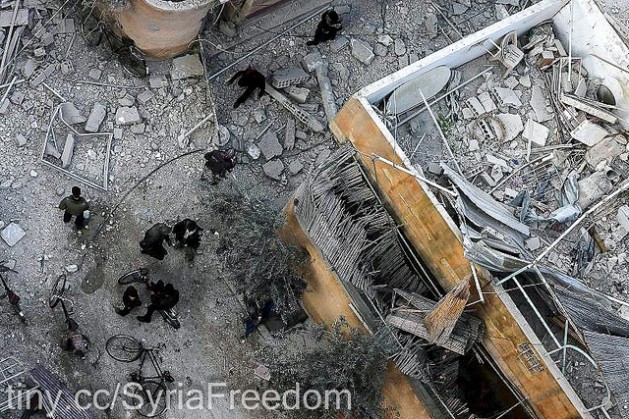 Residents of Douma, a suburb about 10 km northeast of the centre of Damascus, inspect the site of an airstrike. Douma has been a major flashpoint and has witnessed numerous demonstrations against the Syrian government and armed clashes against the Syrian Army and security forces. Photo taken on Jan. 8, 2014. Credit: Freedom House/cc by 2.0

UNITED NATIONS, Jan 10 2014 (IPS) - When Secretary-General Ban Ki-moon chairs a U.N. pledging conference next week for urgently needed aid to Syria, he is expected to warn the donor community that the humanitarian crisis in the politically-troubled Arab nation is threatening to reach biblical proportions.

Since the conflict erupted in March 2011, more than 100,000 people have been killed, over eight million driven from their homes and more than two million have sought refuge in neighbouring countries – and these numbers are growing.

"The numbers are staggering; the suffering is massive." Jens Laerke of OCHA

The figures are alarmingly higher compared to the combined figures for refugees and displaced persons, running into thousands, in two other political hotspots in Africa: South Sudan and the Central African Republic.

The Office of the U.N. High Commissioner for Refugees (UNHCR) estimates about 4.1 million Syrian refugees, including over two million children, will need assistance by the end of 2014.

“The numbers are staggering; the suffering is massive,” Jens Laerke, spokesperson for the U.N. Office for the Coordination of Humanitarian Affairs (OCHA), told IPS.

The pledging conference, scheduled to take place Jan. 15 in Kuwait City, is to be hosted by the Emir of Kuwait, Sheikh Jaber Al-Ahmad Al-Jaber Al-Sabah, and has been described “a very important humanitarian pledging event”.

The first Kuwaiti pledging conference for Syria, which took place in January 2013, also in Kuwait City, raised about 1.5 billion dollars in humanitarian aid.

The United Nations last month estimated the funding needs for Syria at about 6.5 billion dollars in 2014 – “the biggest amount ever requested for a single humanitarian emergency,” Laerke said.

Of the 6.5 billion dollars, 2.3 billion has been earmarked for assistance inside Syria and 4.2 billion dollars for refugee response in neighbouring countries.

The 2014 appeals represent the support plans of more than 100 partner organisations, including U.N. agencies and national and international non-governmental organisations (NGOs), which are working together to address the needs of Syrians.

Asked whether there was a target for next week’s pledging conference, Laerke told IPS: “I do not at the time of writing have a target.

“What I can say is that we, as also expressed by the secretary-general, call on member states to participate in the conference and to remain generous,” he said.

Among those affected in the Syrian crisis are children caught up in the crossfire between the warring parties.

Yoka Brandt, deputy executive director of the children’s agency UNICEF, told IPS, “Kuwait is a chance to give a voice to the millions of children now affected by the Syrian conflict and for the world community to respond.”

She said tangible support will not only save children’s lives today but also help provide for a more secure future through crucial investments in education and protection of children.

Laerke said it is critical to bear in mind that half of all those affected are children. “We must ensure that a generation is not lost,” he stressed.

At the moment, another harsh winter is increasing the suffering among communities already tested by two and a half years of deprivation. Families need shelter, warm clothes, heating materials and hot food to survive, Laerke added.

A joint appeal by U.N. agencies last week called for one billion dollars in funding to save Syria’s children from becoming a “lost generation.”

“The future of these children is slipping away, but there is still a chance to save them,” said Antonio Guterres, the U.N. high commissioner for refugees.

Meanwhile, one of the biggest problems facing the United Nations is gaining access to the needy amidst the continued fighting inside Syria.

Valerie Amos, the U.N.’s emergency relief coordinator, who has pointed out that all the warring parties were responsible for the current constraints, said: “We continue to stress the need for a political solution to the crisis.”

She described the funding needs as “unprecedented” for a humanitarian crisis.

“And the key requirement is always for aid to be delivered in an impartial manner, and that is what the United Nations will continue to do,” he said.

Nesirky also said the secretary-general has “the greatest of faith in the work being done by our humanitarian workers in the field at great risk, and he also has the greatest of respect for the work that’s being done to try to improve access.”