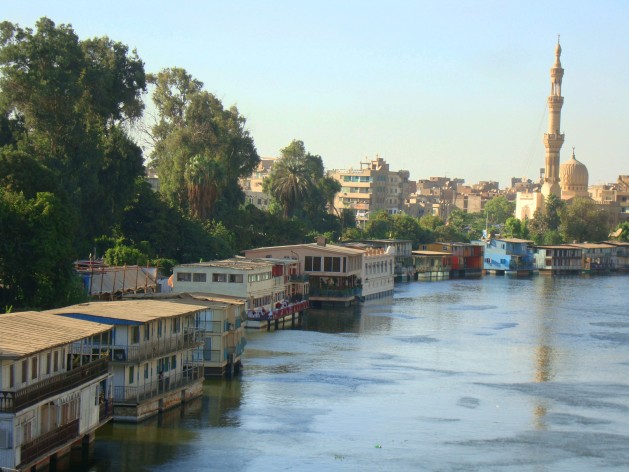 Houseboats line the Nile bank in Cairo. Some 85 million Egyptians depend on the Nile for water. Credit: Cam McGrath/IPS.

CAIRO, Mar 21 2014 (IPS) - When Egypt’s then-president Mohamed Morsi said in June 2013 that “all options” including military intervention, were on the table if Ethiopia continued to develop dams on the Nile River, many dismissed it as posturing. But experts claim Cairo is deadly serious about defending its historic water allotment, and if Ethiopia proceeds with construction of what is set to become Africa’s largest hydroelectric dam, a military strike is not out of the question.

Relations between Egypt and Ethiopia have soured since Ethiopia began construction on the 4.2 billion dollar Grand Renaissance Dam in 2011.

Egypt fears the new dam, slated to begin operation in 2017, will reduce the downstream flow of the Nile, which 85 million Egyptians rely on for almost all of their water needs. Officials in the Ministry of Irrigation claim Egypt will lose 20 to 30 percent of its share of Nile water and nearly a third of the electricity generated by its Aswan High Dam.

"Hydroelectric dams don’t work unless you let the water through.” -- Richard Tutwiler, a specialist in water resource management at the American University in Cairo

Ethiopia insists the Grand Renaissance Dam and its 74 billion cubic metre reservoir at the headwaters of the Blue Nile will have no adverse effect on Egypt’s water share. It hopes the 6,000 megawatt hydroelectric project will lead to energy self-sufficiency and catapult the country out of grinding poverty.

“Egypt sees its Nile water share as a matter of national security,” strategic analyst Ahmed Abdel Halim tells IPS. “To Ethiopia, the new dam is a source of national pride, and essential to its economic future.”

The dispute has heated up since Ethiopia began diverting a stretch of the Nile last May, with some Egyptian parliamentarians calling for sending commandos or arming local insurgents to sabotage the dam project unless Ethiopia halts construction.

Ethiopia’s state-run television responded last month with a report on a visit to the site by army commanders, who voiced their readiness to “pay the price” to defend the partially-built hydro project.

Citing a pair of colonial-era treaties, Egypt argues that it is entitled to no less than two-thirds of the Nile’s water and has veto power over any upstream water projects such as dams or irrigation networks.

Accords drawn up by the British in 1929 and amended in 1959 divvied up the Nile’s waters between Egypt and Sudan without ever consulting the upstream states that were the source of those waters.

While the treaty’s water allocations appear gravely unfair to upstream Nile states, analysts point out that unlike the mountainous equatorial nations, which have alternative sources of water, the desert countries of Egypt and Sudan rely almost entirely on the Nile for their water needs.

“One reason for the high level of anxiety is that nobody really knows how this dam is going to affect Egypt’s water share,” Richard Tutwiler, a specialist in water resource management at the American University in Cairo (AUC), tells IPS. “Egypt is totally dependent on the Nile. Without it, there is no Egypt.”

Egypt’s concerns appear warranted as its per capita water share is just 660 cubic metres, among the world’s lowest. The country’s population is forecast to double in the next 50 years, putting even further strain on scarce water resources.

But upstream African nations have their own growing populations to feed, and the thought of tapping the Nile for their agriculture or drinking water needs is all too tempting.

The desire for a more equitable distribution of Nile water rights resulted in the 2010 Entebbe Agreement, which replaces water quotas with a clause that permits all activities provided they do not “significantly” impact the water security of other Nile Basin states. Five upstream countries – Ethiopia, Kenya, Uganda, Tanzania and Rwanda – signed the accord. Burundi signed a year later.

Egypt rejected the new treaty outright. But after decades of wielding its political clout to quash the water projects of its impoverished upstream neighbours, Cairo now finds itself in the uncomfortable position of watching its mastery over the Nile’s waters slip through its fingers.

“Ethiopia’s move was unprecedented. Never before has an upstream state unilaterally built a dam without downstream approval,” Ayman Shabaana of the Cairo-based Institute for Africa Studies had told IPS last June. “If other upstream countries follow suit, Egypt will have a serious water emergency on its hands.”

Ethiopia has sought to assure its downstream neighbours that the Grand Renaissance Dam is a hydroelectric project, not an irrigation scheme. But the dam is part of a broader scheme that would see at least three more dams on the Nile.

Cairo has dubbed the proposal “provocative”.

Egypt has appealed to international bodies to force Ethiopia to halt construction of the dam until its downstream impact can be determined. And while officials here hope for a diplomatic solution to diffuse the crisis, security sources say Egypt’s military leadership is prepared to use force to protect its stake in the river.

Former president Hosni Mubarak floated plans for an air strike on any dam that Ethiopia built on the Nile, and in 2010 established an airbase in southeastern Sudan as a staging point for just such an operation, according to leaked emails from the global intelligence company Stratfor posted on Wikileaks.

Egypt’s position was weakened in 2012 when Sudan, its traditional ally on Nile water issues, rescinded its opposition to the Grand Renaissance Dam and instead threw its weight behind the project. Analysts attribute Khartoum’s change of heart to the country’s revised domestic priorities following the secession of South Sudan a year earlier.

According to AUC’s Tutwiler, once Sudan felt assured that the dam would have minimal impact on its water allotment, the mega-project’s other benefits became clear. The dam is expected to improve flood control, expand downstream irrigation capacity and, crucially, allow Ethiopia to export surplus electricity to power-hungry Sudan via a cross-border link.

Some studies indicate that properly managed hydroelectric dams in Ethiopia could mitigate damaging floods and increase Egypt’s overall water share. Storing water in the cooler climes of Ethiopia would ensure far less water is lost to evaporation than in the desert behind the Aswan High Dam.

Egypt, however, is particularly concerned about the loss of water share during the five to ten years it will take to fill the dam’s reservoir. Tutwiler says it is unlikely that Ethiopia will severely choke or stop the flow of water.

“Ethiopia needs the electricity…and hydroelectric dams don’t work unless you let the water through.”