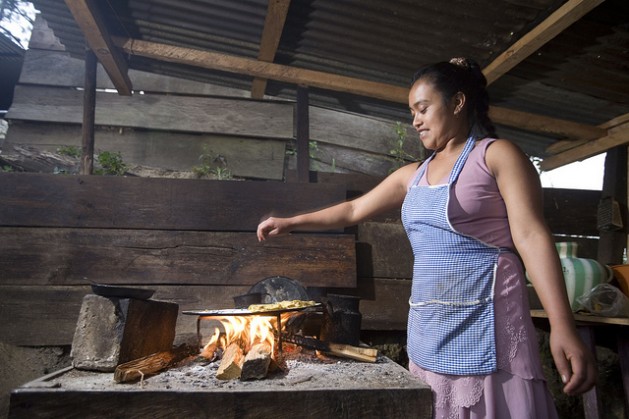 Biomass is the basic source of fuel for many in the southern Mexican state of Chiapas. Credit: Mauricio Ramos/IPS

WASHINGTON, Mar 13 2014 (IPS) - The International Monetary Fund (IMF) is wading strongly into the global debate over the impact of growing income inequality, offering a series of controversial findings that push back on long-held economic orthodoxy – of which the fund itself has long been a key proponent.

The IMF, arguably the world’s premiere financial institution, is stating unequivocally that income inequality “tends to reduce the pace and durability” of economic growth. In a paper released Thursday, the fund also suggests that a spectrum of approaches to “progressive” redistribution – national tax and spending policies that are purposefully tilted in favour of the poor – would decrease inequality and hence “is overall pro-growth”.

“This is the final judgment on inequality being bad for growth.” -- Nicolas Mombrial

“This is the final judgment on inequality being bad for growth,” Nicolas Mombrial, a spokesperson for Oxfam, a humanitarian group, told IPS in a statement.

“The IMF’s evidence is clear: The solutions to fighting inequality are investing in health care and education, and progressive taxation. Austerity policies do the opposite, they worsen inequality … We hope this signals a long-term change in IMF policy advice to countries – to invest in health and education and more progressive fiscal policies.”

For the past half-century, the Washington-based IMF has operated as the world’s “lender of last resort” for failing economies. In return for offering short-term loans to governments in economic crisis, the fund typically demands the imposition of a range of often stringent austerity measures aimed at solidifying the country’s finances.

After years of frustration over these conditions by anti-poverty campaigners, the IMF has recently engaged in a broad reappraisal of this approach. In November, the fund proposed an overhaul of its debt-restructuring guidance, though formal introduction of this proposal has now been pushed back to June, following pushback.

“Although the main points are not new, the IMF paper is nonetheless significant because the organisation has typically been at the more conservative end in its policy advice – from being seen to restrict measures that would ameliorate the worst impacts of crises on those in deepest poverty, for example, to promoting quite damagingly regressive changes to tax systems in their country advice,” Alex Cobham, a research fellow with the London office of the Center for Global Development (CGD), a think tank based here, told IPS.

“Nonetheless, we should not expect massive or immediate changes in IMF policy. The situation of tax policy demonstrates very well how the organisation can continue to promote in-country the same approaches that their own research has discredited.”

The new advice on income inequality will likely be received sceptically in many corners, though the fund is giving the findings its full backing. While Thursday’s release came in the form of a staff paper, the report was given a high-profile rollout here, including an introduction from the fund’s second-highest official, David Lipton.

“Some may be surprised that the fund is engaging in this debate on the design of redistributive policies … [but] one reason why we are discussing this issue today is it’s becoming a hot subject,” Lipton, the fund’s first deputy managing director, said Thursday at the report’s unveiling.

“The interest in redistribution, as reflected in public surveys and our discussions with our members, shows that interest is higher than in the past. Our members want to explore with us how they can pursue distributive policies in an efficient manner.”

The IMF is quick to note that the new paper, which builds on a research note released last month, constitutes not recommendations but rather advice to its 188-country membership, while country-specific design for any redistributive mechanism remains of paramount importance. Nonetheless, the “efficient” options it is offering to both developing and developed governments consider are striking.

These include placing higher taxes on the rich than on other segments of society, as well as strengthening property taxes, potential for which the fund says is particularly significant in developing countries. It also suggests considering increasing the age at which citizens become eligible for pensions and other state old-age programmes.

Many of these suggestions have long been pushed by development advocates as well as global labour-rights activists.

“We’re pleased that the IMF has finally caught up with what the global union movement has been saying for years – that inequality is the number one threat to the economic recovery,” Philip Jennings, the general secretary of UNI Global Union, said in a statement. “The only way out of this crisis is inclusive, sustainable economic growth with a living wage for all.”

CGD’s Cobham says the paper will give support to policymakers who want to tackle inequality, and could serve as the basis for a broader global agreement on the issue.

“It may in fact mark an important moment in establishing the breadth of the consensus that reducing income inequality should be one of the targets of the post-2015 framework that will succeed the Millennium Development Goals,” he says.

A half-decade since the start of the global economic crisis, inequality has risen to the top of global agendas.

In January, the World Economic Forum warned that the growing gap between rich and poor, brought about by globalisation, constituted “the most likely risk to cause an impact on a global scale in the next decade”. The previous month, President Barack Obama likewise stated that income inequality is “the defining challenge of our time”.

Much of this new focus is because the global concentration of wealth that has taken place over the past three decades has increased in recent years, and today stands at modern record levels. According to analysis by Credit Suisse, just one percent of the global population owns around half of the world’s wealth.

According to the new IMF paper, this trend is particularly pronounced in the West, especially in the United States. In developing countries, income inequality has been growing in the Middle East and North Africa, though recently it has begun to decrease in sub-Saharan Africa and, particularly, in Latin America.

Despite this recent downward trend, however, Latin America retains one of the highest levels of inequality of any region.

While the fund points to a variety of social spending as a key way to reduce these levels, the IMF’s Lipton warns that such spending needs to be better designed or risk increasing inequality.

“Fiscal policy has played a major role in reducing inequality in the past and is the primary tool available for governments to affect income distribution,” he said Thursday. “Whether these policies help, or hurt growth, is all a matter of design.”