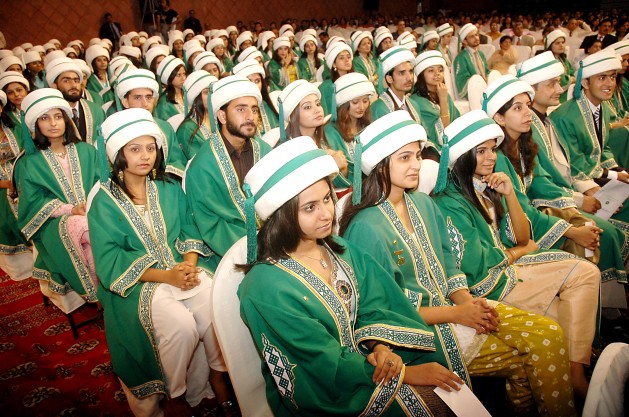 Many women in Pakistan qualify to become doctors, and then do not practice. Credit: Fahim Siddiqi/IPS.

BOSTON, United States, Mar 8 2014 (IPS) - On one of her many visits to Pakistan recently, Sarah Peck, director of the US-Pakistan Women’s Council, spent some time talking to young women medical students in Pakistan. She was struck by their passion and commitment — and by the hurdles they face. The US-Pakistan Women’s Council is working with expatriate Pakistani doctors to find ways to encourage women qualifying as doctors in Pakistan to practice medicine.

Women outnumber male students in medical colleges across Pakistan, forming up to 85 percent of the student body in private universities and 65 percent in the public sector.

But only about half of them end up working as doctors. There are no nationwide figures for this estimate, but the Pakistan Medical and Dental Council’s records show the discrepancy between the number of women medical students and women doctors in Pakistan.

The pattern is also visible in doctors from Pakistan coming to the United States.

“When doctor couples come here, the husband starts to work, the wife takes care of the family,” says Dr Jamila Khalil, president of APPNE, the New England chapter of APPNA, the Association of Physicians of Pakistani Descent of North America.

“I grew up here, I was already a dentist by the time I got married,” she told IPS. A Pashtun from Pakistan’s northwest region bordering Afghanistan, she is a dentist and mother of two teens.

“It was very hard,” she added, her New England twang evident in her pronunciation of the last word, ‘haahd’.

The hurdles women doctors face in Pakistan and how to support them came under discussion at a lunch meeting that Sarah Peck attended recently in Somerville, Massachusetts convened by APPNE.

The US-Pakistan Women’s Council has powerful political connections. It was launched in September 2012 by Secretary of State Hillary Clinton, flanked by two of Pakistan’s most powerful and glamorous women, the then Foreign Minister Hina Rabbani Khar and Ambassador Sherry Rehman.

The Council’s aim to promote people-to-people relations between the U.S. and Pakistan represents a major shift in Washington’s foreign policy towards Pakistan since the Obama administration took over.

One of the organisers, Dr Khalil Khatri, a dermatologist and former president of APPNE, was also present at the APPNA winter session in Karachi last December where Peck met women medical students.

At the Karachi meeting women medical students had identified many different factors behind the difficulties they face in practicing medicine.

There are social pressures and lack of support, with mothers, mothers-in-law, and husbands often not wanting women to work. Families may help young couples with household matters and childcare but they also pressure them to conform to traditional gender roles.

Then, those who don’t go into ob-gyn or pediatrics have to deal with male patients, frowned upon in that highly gender segregated society – although the women medical students at the Karachi meeting said they had no issues seeing male patients.

What was hard, they said, is the harassment they face, like finding the locks broken on their changing room doors, making it difficult for them to strip and scrub down. Male peers and supervisors don’t take this seriously. In fact, those who complain face further problems.

“One way to tackle the security and transport problem would be to arrange shuttles for women medical students especially after hours,” suggested Dr Nasar Quraishi, a pathologist visiting from New Jersey.

One of Dr Khatri’s nieces in Karachi recently started working as a doctor there. “When she has to work late nights, her parents are constantly worried. Two of my other nieces are in medical school there, but they also have every intention of practicing.”

Saima Firdous, 32, a medical student from Pakistan who finished her post-doc at Harvard University last year and is a board member of APPNE, says there is a need for “more women-only medical colleges in Pakistan, so that more people allow girls to study medicine.”

“Coming from a conservative, rural family, I found it really hard,” she told IPS. “Our culture doesn’t allow girls to live or travel alone. I’ve had to fight a lot.”

“It was my three older sisters, who themselves have never been to school, who stood by me and supported me,” said Firdous, who for two years conducted a television show on the state-run Pakistan Television aiming to educate rural dwellers about basic health issues.

She received a major blow when the man she was in love with and about to marry, a U.S.-qualified physician who had encouraged her in her studies, told her that she could finish medical school, but he didn’t want her working as a doctor.

“I refused,” she said. “I hadn’t studied all those years to sit at home.”

Traveling alone to the United States, where she initially stayed with family friends, was another hurdle. “When I’m done, in another two or three years, I want to return to Pakistan and work, motivate other girls,” added Firdous.

“Women doctors are already respected role models in Pakistan, in all fields. Women have a loud voice in media and society in general,” said Dr Naheed Usmani, a paediatric oncologist from Pakistan who lives and works in the Boston area, and has also worked in Pakistan for several years.

The Council should train women doctors from the Pakistani diaspora to mentor and help students problem-solve, she told Peck.

The Council could also use its network to identify and train mentors based in Pakistan.

In the long term, there is a need to “increase motivation among women medical students and support them to not give up,”  Dr Khatri told IPS. “Secondly, educate society to develop a system where medical students are enabled to carry on their work after graduating.”

The Council’s partnership with U.S. doctors of Pakistani origin provides no quick-fix solutions to these myriad problems, but it is a step in the right direction.

Erum Sattar, a law student from Karachi and president of the Harvard Pakistan Student Group who was present at the lunch, said that the Pakistani students at Harvard would help in any way, perhaps by facilitating video conferencing for mentors and connecting people.