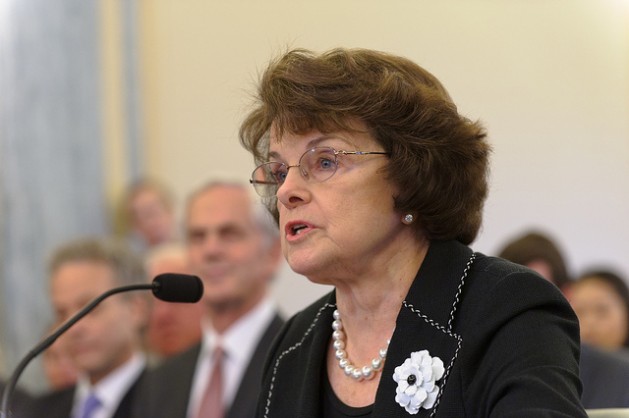 Sen. Feinstein accused the CIA of trying to intimidate Committee staffers by asking the Justice Department to carry out a criminal investigation into how the staffers obtained an internal CIA report on the “enhanced interrogation” programme which U.S. and international human rights groups say amounted to torture. Credit: Sen. Rockefeller/cc by 2.0

WASHINGTON, Mar 12 2014 (IPS) - An ongoing battle between the Democratic chair of the Senate Intelligence Committee and the Central Intelligence Agency (CIA) over reports about the agency’s “enhanced interrogation” practices during the George W. Bush administration has escalated sharply.

The widely respected Committee chair, California Sen. Dianne Feinstein, took to the Senate floor here Tuesday to accuse the CIA of violating U.S. law and the Constitution by secretly removing documents from computers used by the Committee to investigate the agency’s torture and abuse of detainees during Bush’s “global war on terror.”

"This is truly a defining moment, not only for congressional oversight of the intelligence community, but also for President Obama’s legacy on torture." -- Virginia Sloan

She also accused the agency of trying to intimidate Committee staffers by asking the Justice Department to carry out a criminal investigation into how the staffers obtained an internal CIA report on the “enhanced interrogation” programme which U.S. and international human rights groups say amounted to torture.

“(T)here is no legitimate reason to allege to the Justice Department that Senate staff may have committed a crime,” Feinstein declared in a lengthy recounting of her committee’s efforts to investigate the programme and declassify its 6,300-page report to make it available to the public.

“I view the [CIA’s] acting counsel general’s referral [to the Justice Department] as a potential effort to intimidate this staff, and I am not taking this lightly,” she said, noting that the counsel general, whom she did not name, had served as the chief lawyer in the CIA’s counter-terrorism centre which oversaw the controversial interrogation programme until its termination by incoming President Barack Obama in January 2009.

Speaking at a forum at the Council on Foreign Relations, CIA Director John Brennan strongly denied Feinstein’s allegations, insisting that “We wouldn’t do that. I mean it’s just beyond the scope of reason in terms of what we would do.”

But a number of groups that have themselves investigated the interrogation programme said they had no reason to doubt Feinstein’s account, particularly given the CIA’s past efforts to impede external investigations and the publication of the Senate committee’s report which Feinstein said she hoped to release by the end of the month.

“We are outraged by Sen. Feinstein’s description of repeated efforts by the CIA to thwart critical and legitimate congressional oversight through delays, attacks, intimidation and attempts to conceal,” said Virginia Sloan, president of the bipartisan legal watchdog group, the Constitution Project, which last year issued its own damning review of the Bush administration’s detention and interrogation practices.

“This is not a partisan issue. This is truly a defining moment, not only for congressional oversight of the intelligence community, but also for President Obama’s legacy on torture. The White House cannot allow the CIA to drive this process any longer,” she said, adding that the president should not only declassify the Senate report “to the fullest extent possible”, but also release the internal CIA report, which is said to confirm the Senate committee’s reportedly harsh conclusions about both the cruelty and ineffectiveness of the interrogation programme.

“Senators who have seen the Intelligence Committee report say it not only documents serious abuses by the CIA but also the agency’s false reporting about the programme’s value,” added Laura Pitter of Human Rights Watch. “If the CIA manages to block even a public accounting of these abuses, it suggests either that the Obama administration can’t control its own intelligence agency, or that it doesn’t want to.”

The Senate committee report, which was approved in December 2012 on a mainly party-line vote, took five years and more than 40 million dollars to complete.

While it remains classified, it includes a detailed chronology of the formulation and implementation of the “enhanced interrogation” techniques, including water-boarding, and other practices used to extract information from “high-value” terrorist suspects who were often subject to “rendition” and held for incommunicado at secret “black sites” in various countries around the world.

Sen. John McCain, one of the handful of Republicans who had campaigned against those techniques, said the report “confirms for me what I have always believed and insisted to be true – that the cruel, inhuman and degrading treatment of prisoners is not only wrong in principle and a stain on our country’s conscience, but also an ineffective and unreliable means of gathering intelligence.”

Seven months later, the CIA completed its own classified rebuttal, insisting that the Committee’s methodology was flawed. But the rebuttal reportedly contradicted not only the Committee’s conclusions, but also the findings of another secret internal review that was conducted by then-CIA director Leon Panetta, drafts of which had been obtained by the Committee staff in 2010.

“Unlike the official response [by the CIA], these Panetta review documents were in agreement with the committee’s findings,” Feinstein, who insisted that the documents had been lawfully obtained, stressed Tuesday.

The Panetta documents lie at the heart of the current dispute. Published reports over the past week indicated that the CIA had gained access the Committee’s computer system in order to determine how the documents were obtained and removed other documents pertinent to the investigation.

Feinstein charged that, in so doing, the CIA, which is part of the executive branch of government, was essentially spying on the committee in violation of the Constitution’s doctrine of “separation of powers” doctrine, several federal laws, and a presidential order that bans the CIA from conducting domestic surveillance.

The CIA’s inspector general last week asked the Justice Department to investigate whether the agency had acted unlawfully.

But the Justice Department has also been asked by the CIA’s general counsel to open a criminal investigation into how the Panetta documents were obtained – a move that Feinstein and her supporters charged was aimed at intimidating the Committee staff.

While Obama ended the detention programme on taking office, he has repeatedly rebuffed demands by human rights groups to prosecute the Bush administration officials responsible for authorising the interrogation policies or for carrying them out.

Brennan, a career CIA officer who became Obama’s most influential counter-terrorism adviser until his appointment as the agency’s chief one year ago, also served in a top CIA post during the Bush administration but denied he played any role in the interrogation programme.

While during his confirmation hearings he expressed surprise by the findings of the Senate Committee and denounced the use of torture, he later personally delivered the CIA’s rebuttal of its report.

An 11-member Constitution Project task force, which included a number of prominent Republicans and former policy-makers from both parties, issued its own review of the interrogation and detention programme last April.

Among other findings, it concluded that “it is indisputable that the United States engaged in the practice of torture” for which there was “no justification” and “no firm or persuasive evidence” that the information obtained by the programme could not have been gained through other means.

Feinstein’s denunciation of the CIA’s action was particularly remarkable because she has long been criticised by rights advocates for being too protective of the intelligence community.

But she was praised by those same groups Tuesday. “After so many years of congress being unable or unwilling to assert its authority over the CIA, Sen. Feinstein today began to reclaim the authority of Congress as a check on the Executive Branch,” said Christopher Anders, senior counsel with the American Civil Liberties Union (ACLU).

“Public release of the Senate torture [report] will be the next step reining in a CIA that has tortured, destroyed evidence, spied on Congress, and lied to the American people,” he said.