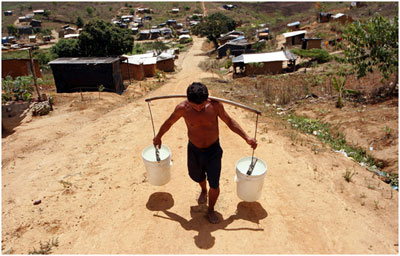 The report highlighted a glaring lack of coordination between energy and water management systems, despite the fact that places where people have inadequate access to water largely coincide with those where people have no electric power.

More than 750 million people in the world have no access to clean water, and more than a billion people are not connected to an electric power grid.

Improving access to those vital resources means recognising the interdependence of water and energy for sustainable development, said Irina Bokova, director-general of the U.N. Educational, Scientific and Cultural Organisation (UNESCO).

Energy production accounts for roughly 15 percent of water withdrawal annually. By 2035, that number will rise to 20 percent due to population growth, urbanisation, and changing consumption patterns.

Similarly, declining water resources also have direct repercussions on the demand for electricity, which is expected to rise by 70 percent by 2035, mostly due to developments in India and China. Already those two countries are home to the largest number of people without access to water: 108 million in China and 99 million in India wake up every morning knowing it will be a life or death search for that precious resource.

Electric power plants, which produce 80 percent of the electricity worldwide, need large quantities of water for the cooling process. Water is also guzzled during energy production and for the extraction of fossil fuels. Likewise, the collection, transport and treatment of water consume massive quantities of energy.

Meeting the power challenges means creating systems that allow for the combined production and management of water and electricity, concludes the World Water Assessment Programme (WWAP), which produced the report.

The report also provides pricing solutions for the crisis, suggesting that the two resources be sold at rates that reflect more accurately their cost and environmental impact. Current water prices hardly reflect the true cost of provision, keeping in mind that it is an essential resource for all life on earth. Higher prices could encourage energy producers and users to value and save water, experts say.

Improving water and energy efficiency means embracing methods such as energy generation through water recycling. Such projects are already being implemented and are likely to spread in the future. In Chile, for example, the Farafana plant treats 50 percent of the wastewater of Santiago, producing alternative energy for 100,000 residents.

U.N. Secretary-General Ban Ki-moon said Friday that water and energy “interact with each other in ways that can help – or hinder – our efforts to build stable societies and lives of dignity for all.”