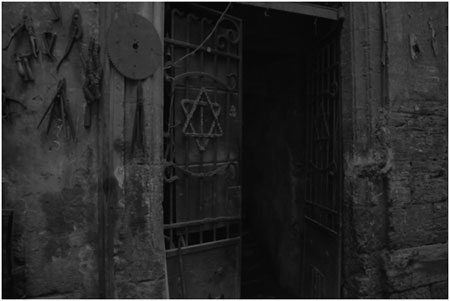 The Star of David in the Jewish district near Alazhar, Cairo. Credit: Jews of Egypt

Regardless, they all made considerable economic and social contributions to the country, with some penetrating the political elite or even reaching celebrity status. Then, in the 1950s, the expulsion of thousands of Jews from Egypt turned all that around.

Released last week in the US, the documentary ‘Jews of Egypt‘ concentrates on the period of time between the creation of Israel in 1948, and the Sinai war in 1956 – known to some as the transition between the cosmopolitan Egypt of old and the modern Egypt of the 21st century, characterised by intolerance.

The popular “association of Arab Jews with Israeli policy is what caused the situation we are currently living in,” Amir Ramses, director of the documentary, told IPS.

Street interviews at the very beginning of the film show that a few years before the 2011 Egyptian revolution, right around the time the film went into production, many Egyptians did not know about Egyptian Jews, and the few that did rejected them as “Zionists”.

The fervent, post-independence nationalism of Egypt’s former President, Gamal Abdel Nasser, saw the imposition on Egyptian Jews of a no return policy, forcing the minority population to abandon their nationality if they ever wanted to leave the country.

For many Jews, the new directive was akin to being trapped between a rock and a hard place. Few wanted to leave, but as the country turned increasingly intolerant, they were left with little choice. Police detentions and religious fundamentalism was leading to the sequestration of businesses and properties, and life in general was becoming unbearable.

Though many fled to Europe and Latin America, Jews of Egyptian origin who were interviewed in the film testified that many tried to stay in their country as long as possible, reluctant to renounce their identity or assume Israeli citizenship.

Some, like the notable Henri Curiel, founder of the Communist Democratic Movement for National Liberation, even continued to support anti-colonialism in the Middle East even after their departure, but never obtained any recognition from the Egyptian government.

Arab scholars have complained that they have had no place in the narrative of the story of Egyptian Jews. It was either told through Western rhetoric falling under the banner of anti-Semitism, or it was buried under the carpet by Egyptian national authorities.

Khaled Fahmy, chair of the history department at the American University in Cairo, penned an article for a national newspaper last year, alleging that records of the Jewish exodus are nowhere to be found in the Egyptian National Archives (ENA).

“It is very sad to be a dozen of a kind between millions who forgot that [a Jewish community] still exists,” Magda Chehata Haroun, the president of the Jewish Community of Cairo – that counts less than 50 members today – told IPS.

Chehata Haroun said Amir Ramses is working on a second documentary on the same topic, which will have to be the last one since there will soon be no more Egyptian Jews to film.

The director of the documentary noted that, since the revolution, groups of enlightened Egyptians have begun to embrace the diversity of their national identity, a necessary development for the future of Egyptian minorities.