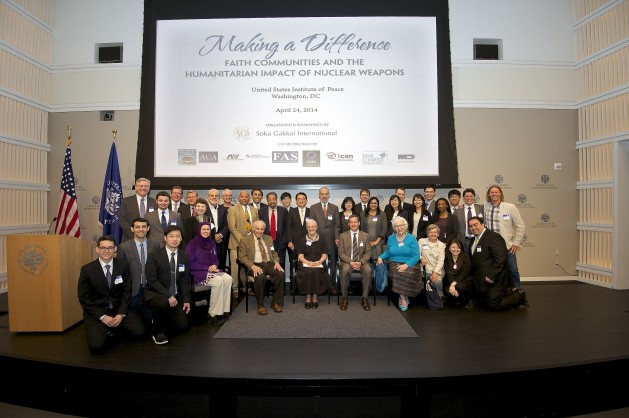 WASHINGTON, Apr 25 2014 (IPS) - On the eve of next week’s meeting at the U.N. headquarters in New York on the Nuclear Non-Proliferation Treaty (NPT), more than 100 representatives of 11 faith groups from around the world have pledged to step up their efforts to seek the global abolition of nuclear weapons.

Gathered at the U.S. Institute of Peace here Thursday, the participants, composed of influential representatives of the Buddhist, Christian, Jewish and Muslim faiths, among others, said their traditions teach that the threat posed by nuclear weapons was “unacceptable and must be eliminated”.

“Nuclear deterrence theory does not work like it used to. In order to reduce the threat of nuclear weapons, the only way is to create an era in which there are no nuclear weapons.” -- Hirotsugu Terasaki

“The continued existence of nuclear weapons forces humankind to live in the shadow of apocalyptic destruction,” according to a statement issued at the end of the one-day conference.

“The catastrophic consequences of any use of nuclear weapons cannot be fully communicated by numbers or statistics; it is a reality that frustrates the power of both rational analysis and ordinary imagination.”

Signatories of the statement include representatives from the Muslim American Citizens Coalition and Public Affairs Council, the Friends Committee on National Legislation and Pax Christi International.

The conference, the latest in a series on the humanitarian impact of nuclear weapons, came as delegates from around the world prepared to convene in New York for the NPT PrepCom, set to run Apr. 28 through May 9. That meeting will help lay the groundwork for the 2015 Review Conference, also slated for New York, on implementing the NPT’s goals of non-proliferation and eventual elimination of nuclear weapons.

“Nuclear deterrence theory does not work like it used to. In order to reduce the threat of nuclear weapons, the only way is to create an era in which there are no nuclear weapons,” Hirotsugu Terasaki, vice-president of Soka Gakkai and executive director of Peace Affairs of Soka Gakkai International, told IPS.

“The president of our organisation has said, ‘Nuclear weapons are not a necessary evil, they are an absolute evil.’”

One goal of Thursday’s symposium was to flesh out the fatal consequences of nuclear weapons, including ramifications that go well the immediate fallout of a nuclear strike.

For instance, keynote speaker Dr. Andrew Kanter, former director of Physicians for Social Responsibility, told the participants of scientific findings that even a small detonation could cause a widespread deadly famine by accelerating climate change and disrupting global agriculture.

Others discussed the need to engage the Permanent Five members of the U.N. Security Council in the broader conversation. As a first step, Thursday’s statement will be presented next week to the chair of the NPT PrepCom.

“We need to think again about what we mean by security and how we experience security,” Marie Dennis, co-president of Pax Christi International, said. “As faith-based communities, we are in a position to ask those kinds of questions.”

Since 1970, when the NPT became effective, its regular review conferences have produced few successes other than the Comprehensive Nuclear Test Ban Treaty (CTBT), which bars all nuclear explosions – including those, such as took place in the Marshall Islands, for testing purposes.

Additionally, the five nuclear-armed signatories have met annually since 2009. Last week, they met in Beijing where they reaffirmed past commitments and solidified a reporting framework to share national progress on meeting treaties.

Also present at Thursday’s symposium was Anita Friedt, an official on nuclear policy at the U.S. State Department. She described some of the reasons that nuclear abolition has been such a frustratingly slow process. 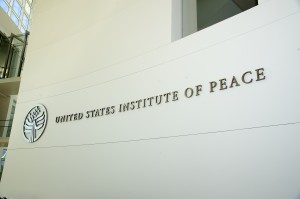 More than 100 representatives of 11 faith groups from around the world have pledged to step up their efforts to seek the global abolition of nuclear weapons. Credit: Courtesy of SGI

“Why can’t we just stop and give up nuclear weapons? This is really hard work,” Friedt said.

“If we just say today we’re just going to give up nuclear weapons, there’s no incentive for other countries to do so, necessarily. Unfortunately, it is more complex than it may seem at the surface.”

There are also significant bureaucratic challenges to the ongoing NPT negotiations. The U.S. Congress, for instance, failed to ratify the CTBT in 1999 and only barely ratified President Barack Obama’s New START Treaty – a strategic arms-reduction agreement between the U.S. and Russia – in 2010.

Yet SGI’s Terasaki says global faith communities are well placed use their broad leverage to try to influence, and speed up, this process. Thursday’s event, he noted, was the first time such a discussion had come to the United States.

“We want to help re-energise the voice of faith communities,” he said, “and explore ways to raise public awareness of the inhumane nature of nuclear weapons.”

The conference occurred on the same day that the Marshall Islands filed an unprecedented lawsuit before the International Court of Justice against the United States and eight other nuclear-armed countries for not upholding their commitments to the NPT and international law.

“Article VI [of the NPT] defines an obligation to negotiate in good faith for an end to nuclear arms and disarmament,” David Krieger, president of the Nuclear Age Peace Foundation and a consultant to the Marshall Islands lawsuit, filed Thursday, told IPS.

“This lawsuit indicates that each of the nuclear armed states are modernising their nuclear arsenal. You can’t modernise your arsenal and say you’re negotiating in good faith.”

Five countries are currently party to the NPT: China, France, Russia, the United Kingdom and the United States. However, the Marshall Islands is also suing India, Israel, North Korea and Pakistan, claiming that those countries are bound to the same nuclear disarmament provisions under international law.

The small island nation, in Micronesia in the Pacific Ocean, is not suing for monetary compensation. Rather, its government wants the International Court of Justice (ICJ) to declare the nine countries in breach of their treaty obligations and to issue an injunction ordering them to begin negotiating in good faith.

Krieger says the Marshall Islands have “suffered gravely” as a result of nuclear testing carried out by the United States between 1946 and 1958.

“They don’t want any other country or people to suffer the consequences that they have,” he said, noting that the residents of the Marshall Islands have suffered health effects in the generations since the testing stopped, including stillborn babies and abnormally high rates of cancer.

Out of the nine nuclear-armed countries, only the United Kingdom, India and Pakistan accept the ICJ’s jurisdiction. The other six countries, including the United States, are not to be invited to the court in order to state their reasons for not fulfilling their obligations under the NPT.

Still, just to be sure that the United States answers for its responsibility to the NPT, the Marshall Islands has also filed a lawsuit in a U.S. federal court in San Francisco.