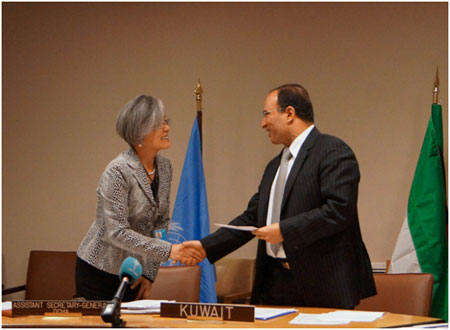 UNITED NATIONS, Apr 7 2014 (IPS) - A message of hope has been delivered to the people of Syria in the form of generous humanitarian aid from an oil-blessed Gulf nation: Kuwait.

Speaking at a ceremony Monday, Assistant Secretary-General in the U.N. Office for the Coordination of Humanitarian Affairs (OCHA) Kyung-wha Kang said that Kuwait’s contribution to the United Nations and the international humanitarian system goes beyond monetary values.

The support from Kuwait has helped U.N. agencies provide assistance to alleviate the suffering of the Syrian people affected by the crisis, Kang said.

“More than nine million people are in need of aid and protection inside Syria, some three million of them in hard-to-reach areas, and up to 240,000 of those in currently besieged areas.”

“We hope that our contributions will encourage other donors to deliver on their commitments,” said Ambassador Mansour Ayyad Al-Otaibi, the permanent representative of Kuwait to the U.N.
Since the second pledging conference in January, only 30 percent of the pledges have materialised, said Kang.

“With the Kuwati cheque, it is still only 44 percent of the pledged amount. Many of the pledges from other countries have not come through yet,” Kang told IPS.

Kuwait will channel half of the 500 million dollars to the U.N and its specialised agencies, and the rest to Kuwaiti non-governmental organisations (NGOs) and the Kuwait Development Fund.

“The state of Kuwait highly appreciates and values the roles of the organisations and entities benefitting from the donation and hopes that it will help end the suffering of the Syrian people,” Al-Otaibi said.

“Timely funding, such as this donation from Kuwait, is essential to ensure that supply pipelines are not interrupted and we can use the most direct routes to bring these supplies in,” she said.

Jordan Ryan, the UNDP assistant administrator and director bureau for crisis prevention and recovery said “we deeply appreciate Kuwait’s leadership, generosity and vision in making sure that humanitarian work now links to development so it is sustainable, and to make sure that life is better for all.”

“This generous contribution from the State of Kuwait will bring a message of hope to the people of Syria and make a real and tangible difference in the lives of hundreds and thousands of Syrians,” Kang said.