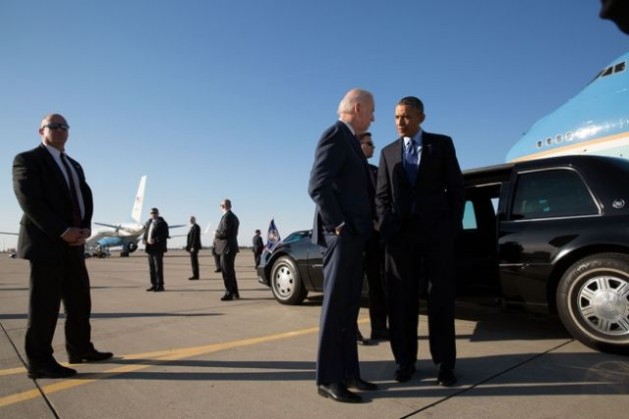 WASHINGTON, Apr 22 2014 (IPS) - As he embarks Tuesday on a major trip through East Asia, U.S. President Barack Obama will be focused on reassuring anxious – albeit sometimes annoying – allies that Washington remains determined to deepen its commitment to the region.

Just how annoying some allies can be was underlined on the eve of his departure as Japan’s premier, Shinzo Abe, provoked renewed protests from both China and South Korea over his sending a ceremonial offering to the Yasukuni Shrine, the temple which honours Tokyo’s war dead, including senior officers responsible for atrocities committed by Japan in both countries during World War II.

There is little question that security concerns, particularly those aroused by China’s recent assertiveness, will loom large.

As for anxiety, Asian commentators have made little secret of their concern that Russia’s annexation of Crimea and continuing tensions with Ukraine could set a precedent for a resurgent China, whose increasingly assertive behaviour in pressing its territorial claims in the East and South China seas has provoked a number of its neighbours to upgrade military ties to the U.S., as well as increase their own military spending.

Moreover, Obama, whose extrication from the deep hole his predecessor dug for him in the Greater Middle East has gone more slowly than had been hoped, has necessarily been distracted by the ongoing Ukraine crisis which, in turn, has prompted the U.S.’s NATO allies – especially the alliance’s newest member along Russia’s western periphery – to seek reassurances of their own.

“Can Mr. Obama afford to invest more time in Asia when he is bogged down with crises in Ukraine and Syria?” asked the New York Times’ “editorial observer”, Carol Giacomo, Monday.

Obama was originally scheduled to make this trip last fall, but he opted instead to stay home to deal with the Republican shutdown of the government – the latest example of the kind of partisan-driven action that has also sown doubts among Asian allies, as well as others, about the ability of Washington to follow through on its foreign commitments.

This week’s tour will begin with a state visit to Japan, during which he will meet with the troublesome Abe, whose personal visit last year to the Yasukeni Shrine drew a harsh public rebuke from Washington.

The main substantive agenda item on that leg of the trip, according to administration officials, will be to try to narrow differences on agricultural and automobile provisions in the pending 12-nation Trans-Pacific Partnership (TPP) trade agreement, the main pillar of the administration’s non-military “pivot” or “rebalancing” toward the Asia/Pacific launched in 2010.

From Tokyo, Obama will fly to Seoul where he will take up both trade and security issues, including a visit to the Combined Forces Command to address U.S. troops charged with helping defend South Korea against the nuclear-armed North.

Obama will then become the first U.S. president to visit Malaysia since Lyndon Johnson nearly 50 years ago, in part to launch a “Young Southeast Asian Leaders Initiative” and meet with Malaysia civil society activists.

His last stop will be the Philippines where, among other events, he will attend a state dinner hosted by President Benigno Aquino III and meet U.S. and Filipino soldiers and veterans to underline Washington’s longstanding military relationship.

While Obama and his entourage will emphasise the growing economic links that tie the U.S. to the region – if, for no other reason than to counter the widespread impression that Washington’s “pivot” is primarily aimed at increasing its military presence to “contain” China – there is little question that security concerns, particularly those aroused by China’s recent assertiveness, will loom large.

Indeed, China’s territorial claims in the South China Sea conflict with those of both Malaysia and the Philippines with which the U.S. has a 63-year-old mutual defence treaty and which has not been shy about contesting Beijing claims – both through Law of the Sea Convention and most recently by successfully resupplying a long-stranded Filipino naval vessel blockaded by Chinese naval forces.

Nor has Aquino been shy about tightening military links with Washington, inviting it to enhance its military presence in the archipelago and negotiating an “access agreement” that could eventually return U.S. forces to Subic Bay naval base from which they were essentially evicted in 1991 at the end of the Cold War.

Security concerns are likely to play at least as strong a role in the early part of Obama’s tour.

While North Korea’s nuclear arms programme and missile launches remain a major preoccupation for both South Korea and Japan, China’s claims in the East China Sea – and most recently its declaration last fall of an Air Defence Identification Zone (ADIZ) – increased tensions with both countries, especially Japan which has scrambled warplanes in response to Chinese aircraft that entered the zone near the disputed Senkaku Islands, which China claims as the Diaoyu Islands.

Although Washington responded to Beijing’s declaration with its show of force – an overflight by B-52 bombers – it disappointed Tokyo, with which it signed a mutual-security treaty in 1952, by instructing U.S. commercial airliners to comply with China’s identification requirements.

Some Japanese officials and analysts have publicly criticised what they regard as an insufficiently assertive U.S. response to Russia’s absorption of Crimea despite a 1994 agreement between Washington, Kiev, London, and Moscow guaranteeing Ukraine’s territorial integrity.

They worry that Beijing may now be tempted to make a similar move on the Senkaku/Diaoyu Islands, just as some in Southeast Asia have expressed similar concerns about China’s intentions in the South China Sea.

But most U.S. analysts, including the administration, reject the analogy.

“We have longstanding alliances in Asia with most of the countries where the maritime territorial disputes with China are most severe, and we have stated time and again that we will meet our alliance commitments,” said Kenneth Lieberthal, a Brookings Institution expert who served as President Bill Clinton’s senior Asia adviser, last week.

“We don’t have any such commitments to Ukraine. We don’t have an alliance. We have never assured Ukraine’s territorial integrity by threatening the use of force…It’s a different situation, and I think the Chinese are very clear about those differences.”

Besides the lack of any defence agreement, “if you look at the overall importance of East Asia to the U.S. and global peace and security,” he added, “there’s also no comparison.”

Obama, who will travel to China in the fall, has made clear that he nonetheless wants to avoid unnecessarily antagonising Beijing and has tried to tamp down tensions between it and Tokyo, in part by trying to dissuade leaders in both countries from stoking growing nationalist sentiments among their citizens.

Washington has also tried hard in recent months to reconcile Abe and South Korean President Park Geun-Hye – to the extent of personally convening a summit with the two nationalist leaders on the sidelines of a nuclear security conference at The Hague last month.

But Abe’s latest bequest to the notorious shrine, particularly coming on the eve of Obama’s trip, is unlikely to help matters.

“The U.S. can be a leader, a catalyst, and a stabiliser in the region, but it can’t do it all by itself,” noted Romberg. “It’s important that other countries, particularly allies, coordinate and cooperate, and not spend their time nattering at each other all the time.”