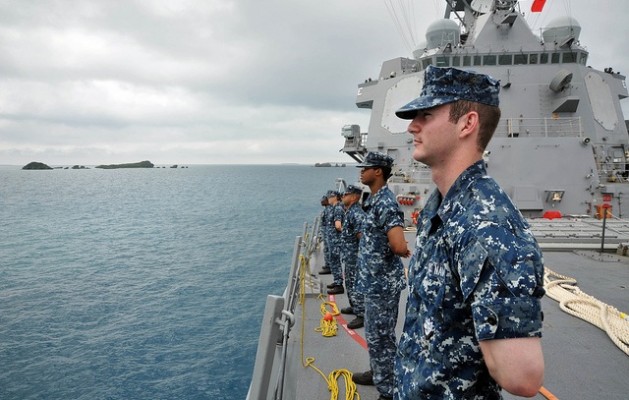 TOKYO, Nov 25 2012 (IPS) - Okinawa, the largest of a group of 60 sub-tropical islands forming Japan’s southernmost prefecture, has an equable climate and preferential treatment for United States servicemen under the Mutual Cooperation Security Treaty between the U.S. and Japan.

According to Chobin Zukeran, a member of the House of Representatives from Okinawa, the archipelago is the perfect U.S. base because it fans out into the Pacific Ocean towards Taiwan, making it a vital bulwark for U.S. military strategists concerned with containing China.

But Okinawans, who number roughly 1.4 million, have long opposed U.S. military presence on their homeland, which experienced the only bloody ground battle between Japan and the invading U.S. military at the end of World War II in 1945.

Since the return of the islands to Japan in 1972, over 90 percent of Okinawans – concerned about their personal safety and noise and environmental pollution – have supported the demand for a complete removal of the bases, which occupy 18 percent of their land.

Now, a string of recent incidents involving military personnel has pushed opposition to the bases into outright protest and threatens to foil the U.S.’ plans to beef up its military in the Asia-Pacific region.

On Nov. 7, Christopher Browning and Skyler Dozierwalker were charged with raping and injuring a local woman on Oct. 16, in a case that sparked widespread protest across Okinawa.

“Okinawa’s struggle against the U.S. military bases is reaching a turning point. We are prepared to take our demands all the way to Washington to end the deadlock,” Zukeran said at a press meeting in Tokyo earlier this month.

Frustration with impunity for U.S. troops on the island is nothing new. In 1995, the gang rape of a 12-year-old Okinawan girl by three U.S. servicemen resulted in a U.S.-Japan agreement to reduce U.S. military presence on the Okinawan chain of islands, but this did little to appease the local population.

“The rapes and a skewed sense of justice when these crimes involve U.S. servicemen is the worst form of violence against women,” said Ryuichi Hattori, a member of the Social Democratic Party that has traditionally led political demands to have the bases removed from Okinawa.

Statistics compiled by the police indicate no fewer than 6,000 cases of crime – including violence and rape – since 1972.

Catherine Fisher, an Australian national who was raped in 2002 by a sailor stationed on a ship on the U.S. naval base of Yokosuka, 64 miles south of Tokyo, was among the first women to speak publicly about the latest crime.

Fisher took her own case to the U.S. in September in pursuit of her attacker who had been honourably discharged by the U.S. military, although he was found guilty by the Tokyo district court in 2004 and ordered to pay damages.

“I was determined to receive justice and challenge a system that is totally unfair. Perpetrators, when they are U.S. soldiers, have legal protection and this must be changed,” she told IPS.

Fisher is currently touring Japan to gather support for her demand that perpetrators of crimes remain in Japan to face trial. She is also trying to set up a 24-hour rape crisis centre that can deal specifically with crimes committed by U.S. military servicemen.

Yet another wave of protest is growing over regular crimes committed by U.S. marines who frequent the bustling bars of Okinawa and participate in its vibrant nightlife.

Masayo Hirata, a former counselor for women seeking advice on their problems with U.S. troops – including offspring abandoned by fathers returning to the U.S. – says romantic liaisons with locals are common.

“Marrying or having relationships with American servicemen has become common these days among younger generation females who meet them in bars,” she said.

These interactions are a big part of the problem, according to protest groups, which include academics, lawyers and local politicians.

Sexual exploitation of local women has also sparked protests in other Asia-Pacific countries hosting U.S. forces, such as in the Philippines, which has a ship repair and recreational facility.

Public protests compelled the Philippine Senate to vote against the renewal of the lease on Clark Base in Angeles City in 1991 – a decision that many Okinawans found encouraging.

South Korea, officially at war with North Korea, hosts 37,000 marines located around the country, but the brutal killing in 1992 of a local woman working in an entertainment area close to the bases triggered demands for an end to the arrangement.

A 2010 survey conducted by the Mainichi Shimbun and Ryukyu Shimpo newspapers found that 71 percent of the Okinawans polled felt that the presence of U.S. troops was not necessary and 41 percent wanted the bases removed.

Campaigns have also focused on environmental degradation caused by the construction of military bases.

Human sit-ins against the construction of a heliport off the northeast coastline of Henoko, a quiet village, were forcibly disbanded. Locals, along with environmentalists on the mainland, claimed the heliport construction endangered coral and the native dugong population.

Okinawans say their daily lives are consumed with gnawing fear of accidents from U.S. fighter airplanes that also create deafening noise as they fly into U.S. bases located in densely crowded areas.

Animosity has recently been aggravated by the deployment on the island of Osprey aircraft, with locals voicing concerns over the poor safety record of the plane, which is capable of taking off and landing vertically.

Prof. Tsuneo Namihara, sociologist at the Okinawa University, explained to IPS that the recent territorial clashes between Japan and China over the Senkaku islands, claimed by both countries, have made it more difficult to get rid of U.S. bases.

“As a result, I fear the anti-base movement will veer away from the traditional pacifism (associated) with the local protests. The younger generation is getting impatient with the heavy hand of the Japanese government that is ignoring the wishes of the local population,” he warned.