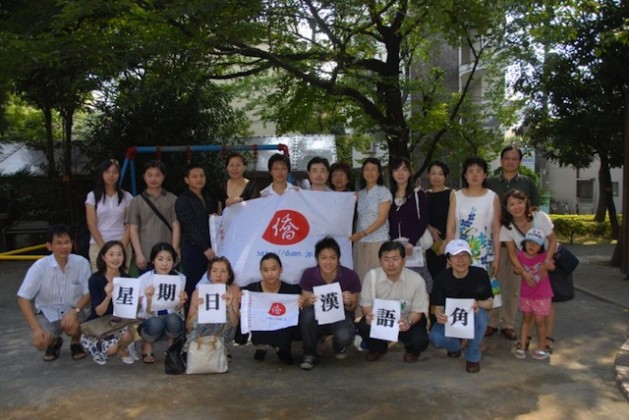 TOKYO, Sep 29 2012 (IPS) - While the 40th anniversary of the normalisation of Japan-China relations passed under a dark shadow of rising tensions and bitter territorial disputes in East Asia, a strand of citizen-based diplomacy at the grassroots level is emerging in Japan as a path towards regional reconciliation.

The uninhabited archipelago in the East China Sea, which may shelter large deposits of natural gas, are known as the Senkaku Islands in Japan, Diayou in China and the Tiaoyutai Islands in Taiwan.

The possibly resource-rich cluster that lies below Japan’s southernmost island of Okinawa has long been a major bone of contention between China and Japan, with Taiwan, too, laying claim to the territory.

The Japanese government’s proposal to buy the islands from a private owner sparked a wave of protest across 50 cities in China earlier this month.

The violence, which included the destruction of several Japanese establishments, forced a number of staff members to relocate back to Japan, while hundreds of Japanese tourists cancelled their visits to China.

The Senkaku Islands were not the only source of conflict at the U.N. this week. On Thursday, South Korean President Lee Myung-bak rejected Noda’s vow to protect Japan’s sea and land space – an obvious reference by the latter to the dispute with South Korea over ownership of Takeshima, a pair of rocky islets known in Korean as Dokto.

A street poll conducted by the Tokyo-based Nippon Broadcasting Corporation this month indicated the Japanese public wants the government to take a stronger stance in these territorial disputes, particular where South Korea is concerned.

East Asia political experts here view these tensions as a further threat to the rocky bilateral relations that have existed since diplomatic ties were established with China in 1972 and with South Korea in 1965.

But a growing number of concerned citizens are convinced that grassroots efforts and local diplomacy can help defuse tensions between the agitated neighbours.

These concerned voices are calling for a cooling down of the situation in an attempt to prevent mutual economic losses, trade boycotts or suffocation of the free flow of students, professionals, artists and information between the various countries.

A citizens’ movement for change?

Duan Yuezhong, a Chinese national living in Tokyo, is very dedicated to this movement. Undeterred by political hot-headedness, he is conducting a discussion group for the Japanese public.

“Nothing can stop my efforts in Japan towards a citizen-based approach to nurture closer ties between China and Japan. To withdraw now is to give up on the future,” he told IPS.

Yuezhong, a former journalist in China, has spent almost two decades in Japan. He owns a publishing company that prints books specialising in Japan-China relations and also conducts popular Chinese-language classes at a local park.

Yuezhong has great faith in the fledging citizen’s movement that highlights the need for political restraint and the importance of objective negotiations between countries.

Akiko Ozaki, a Japanese businesswoman who set up a travel agency in China two years ago, echoed these sentiments. She appealed to participants of her annual tour to Dalian, a major port city in the northeast of China, to go ahead with their visit scheduled for next month.

“My tour may survive. For ordinary people like us who have developed close business ties with China it is very difficult to throw away (our) hard work because of political (stubbornness),” she told IPS.

While economic ties have cemented East Asia as a formidable bloc — China has now overtaken the United States to become Japan’s top trading partner — mistrust is deep-rooted due to Japan’s history of colonisation in the region.

“There is a huge perception gap when it comes to understanding Japanese colonisation in all the three countries,” according to professor Masao Okonogi, an expert on Japan-Korea relations at Kyushu University.

“Against the growing international clout of China and South Korea, Japan must seek to put the past behind it,” he explained.

In an effort to do just this, Okonogi participated in several joint study programmes on history that took place on an annual basis between Japan and South Korea until the project was disbanded two years ago.

“Political interference on both sides dealt a severe blow to crucial attempts to foster a deeper sense of mutual understanding of the historical past but we must persevere,” he explained.

Yoichi Tao, scientist and manager of Global Voices – a website that hosts a myriad opinions including those of Chinese and Korean students in Japan – says space for wider debate on differences between Japan and its East Asian neighbours is crucial.

“Pursuing economic development has pushed the vital importance of bridging (misunderstandings) to the back burner. The latest upheaval has (proven) that the economy alone does not bring stability in East Asia,” he told IPS.

Kao Hui Fen, a Taiwanese national in Tokyo, cannot agree more. Fen says after fifteen years in Japan she has become more outspoken about Japanese colonisation of her country, an approach that has not caused her problems.

“I tell my Japanese friends that colonisation is bad. They do not respond angrily and some are even willing to discuss the past objectively,” she said.

Tao believes that sharing honest opinions at the civilian level can weaken conservative and narrow political agendas that have long divided Japan and its closest Asian neighbours.

“People can lead the way forward in East Asia where emotional historical issues have bogged us down for too long,” he said.