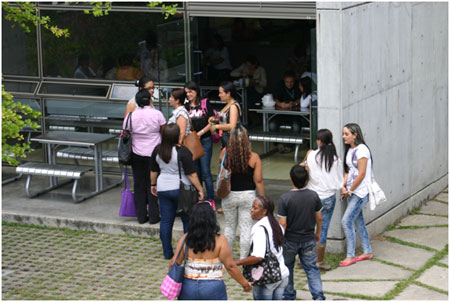 Women and girls wait outside of a local community centre and library in Medellin, Colombia. Credit: Joan Erakit/IPS

MEDELLIN, COLOMBIA, Apr 15 2014 (IPS) - When you walk through downtown Medellin on a hot Saturday night, it is a common sight to see throngs of people sitting on sidewalks, milling outside make-shift tech stores that sell calling cards, chargers and other cell phone accessories.

They flood the local plaza chatting loudly, nibbling on bits of fried plantain and bargaining over goods—even as a popular salsa tune blares from a nearby loudspeaker.

As we cross the street to an opposite pavilion under the Metrocable, we notice a young woman—possibly in her early twenties—walking by a group of men. She is about 5’5 wearing a black tank top, blue shorts and low heel shoes. Without warning, one of the men sitting on the sidewalk draws out his hand and pinches the woman between her legs.

Recounting the incident, Daniela Talero, a participant at last week’s World Urban Forum (WUF7) told IPS that safety in cities is “important,” – particularly for women — and that “it is how you measure your quality of life.”

Violence against women is one of the biggest challenges facing urban areas in countless cities across the globe. According to UN Women, 70 percent of women have experience physical and/or sexual violence in their lifetime and those living in urban areas are “twice as likely as men to experience violence, particularly in developing countries.”

Although the conversation about safety in urban areas took on a much bigger role during WUF7, some were still sceptical.

Kevin Mugenya, an Urban Programming Manager from World Vision in Kenya told IPS: “I think first of all people have not understood how women interact differently with public spaces, and even if they’ve understood the challenges, how then do we move it to the next level?” he asked.

For Talero, interacting differently with public space goes far beyond mobility. Each day, women have to choose clothing based on where they might be going and who will be around, for fear of unwanted attention.

Upon visiting an informal settlement, one can find men parading the streets at any given time of the day. As Mugenya puts it, “there are challenges in regards to livelihood” in urban settings.

Boys often find themselves out of school, unable to earn a living and left to their own devices in search of activity. It is in these unfortunate situations that men prey on vulnerable women.

As city planners gathered at WUF7 to discuss this growing problem, the solution seemed to go beyond the revamp of the cityscape; providing great lighting, putting mirrors along street buildings so women could see who was walking behind them, or even creating a transportation systems just for women—a solution Mugenya firmly believes will not address the real issue and will only create inequality—did not seem to sustain the concerned.

By creating public spaces that are inclusive and target the participation of men, a city begins to slowly take responsibility for the actions of their citizens.

The conversation about sexual violence is more effective with men, rather than with just women. When men are brought to the same table, given the same information, required to follow the same rules and held accountable for their actions, they become part of the solution and not just the problem.