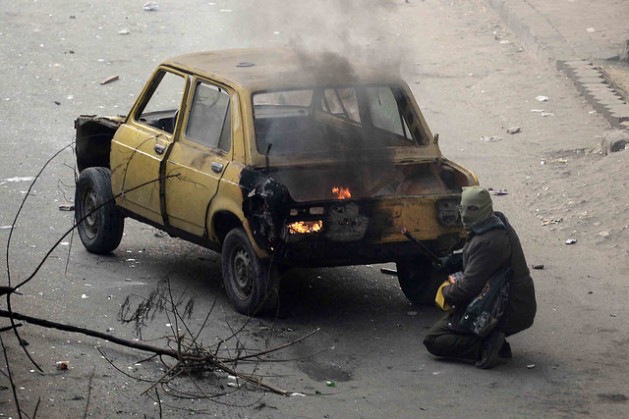 WASHINGTON, Apr 29 2014 (IPS) - Five days after approving the transfer of 10 Apache helicopters to aid Egypt’s “counter-terrorism” campaign in Sinai, the administration of President Barack Obama denounced as “unconscionable” the latest round of mass death sentences against members of the Muslim Brotherhood handed down by an Egyptian court Monday.

Warning that the decisions “foster the instability, extremism, and radicalization that Egypt’s Interim Government says it seeks to resolve”, the State Department also complained that a ruling by yet another court to ban the April 6 Youth Movement was “troubling.”

“This perceived non-action will empower the junta in its bloody crackdown on all kinds of opposition and its continuing massive human rights violations." -- Emile Nakhleh

“Supporters of the movement were at the forefront of the January 25, 2011 revolution that overthrew former president (Hosni) Mubarak, and the Government of Egypt must allow for the peaceful political activist that the group practices if Egypt’s Interim intends to transition to democracy, as it has committed itself to do,” according to a statement issued in the name of the Department’s spokesperson, Jan Psaki.

Human rights groups also harshly criticised the latest court decisions, arguing that the judicial branch of Egypt’s government appears to have lost its independence and become a willing tool of the dominant military whose former chief and defence minister,

Field Marshal Abdul-Fattah el-Sisi is virtually certain to win the presidential election scheduled for May 26-27.

“Egypt’s judiciary risks becoming just another part of the authorities’ repressive machinery, issuing sentences of death and life imprisonment on an industrial scale,” according to Hassiba Hadj Sahraoui, deputy director of the Middle East and North Africa at Amnesty International in London.

Independent experts here also took exception to Washington’s reaction, suggesting that until the U.S. takes stronger action, notably a cut-off of all military assistance, its verbal condemnations will not be taken seriously.

The new rulings came just as Secretary of State John Kerry was scheduled to meet Tuesday with visiting Egyptian Foreign Minister Nabil Fahmy in what was billed as an effort to improve relations that were strained initially by Washington’s partial suspension of military cooperation and aid following last July’s coup against President Mohamed Morsi, Egypt’s first democratically elected president and a former Brotherhood leader.

“For many Egyptians and other Arabs, including liberals and Islamists, the U.S. reaction is mere words that will have no effect on Egypt’s ruling junta,” according to Emile Nakhleh, a former director of the Political Islam Strategic Analysis Programme at the Central Intelligence Agency (CIA).

“This perceived non-action will empower the junta in its bloody crackdown on all kinds of opposition and its continuing massive human rights violations,” he told IPS.

Nakhleh added that the delivery of the Apache helicopters, which was announced last week, as well as all military-to-military and intelligence cooperation with Egypt should be suspended “in reaction to the junta’s egregious human rights violations, sham trials, and summary convictions.”

Monday’s court decisions followed the sentencing last month of 529 people to death for a 2013 attack against a police station in Minya in which one officer was killed.

The same court announced Monday that it was commuting the sentences of 492 of those defendants to life imprisonment but was confirming the death penalty for the remaining 37.

The same court, however, proceeded to sentence another 683 people, including the Brotherhood’s top leader, Mohammed Badie, to death in connection with a separate attack in the same area.

Both incidents took place the same day last August after government forces in Cairo opened fire on demonstrators protesting against Morsi’s ouster, killing many hundreds of his supporters. Both trials took place in a matter of a few hours, and most of the defendants were tried in absentia.

“The only shocking thing about this latest sentencing is that they would do this again following the harsh international reaction to the outlandish verdicts from last month,” said Samer Shehata, an Egypt expert at the University of Oklahoma.

“It shows essentially a disregard not only for due process and Egyptian law, but also for international opinion,” he told IPS.

Since Morsi’s ouster, the military-backed regime has made clear its desire to crush the Brotherhood. In addition to arresting Morsi and charging the group’s leadership with capital offences, security forces have carried out several massacres of demonstrators, killing more than 1,000 people and detaining as many as 23,000 more, many of them in secret prisons where torture is routinely practiced, according to human rights groups.

They have also declared the Brotherhood a terrorist organisation.

The regime has also proposed new anti-terrorist legislation that, among other provisions, would make holding a leadership position in the Brotherhood, despite its advocacy of non-violence, a capital crime; expedite procedures for prosecuting defendants accused of terrorism; and significantly broaden the definition of terrorism to include any action that could “obstruct” the work of public officials or various other institutions. It would also criminalise any action that could “harm national unity”.

“By these definitions, anyone who participated in the popular uprisings of 2011 or 2013 could be branded a terrorist,” noted Joe Stork, an Egypt specialist at Human Rights Watch (HRW).

Monday’s third court decision – to ban the “pro-democracy” April 6 movement– was based on charges that the group had “tarnished the image” of Egypt and conspired with foreign powers.

Despite the group’s initial support for the military coup, three of its most prominent leaders were sentenced to three years of hard labour last fall for allegedly organising an unauthorised demonstration to protest police repression. Their sentences were upheld by an appeals court earlier this month.

“This reveals the true character of the regime in Egypt,” said Shehata. “It’s not interested in restoring democracy; it is interested in wiping out dissent – initially the Muslim Brotherhood and now liberal democracy activists and NGOs and human rights defenders.”

He expressed frustration with Washington’s reaction, insisting that military aid should be cut off.

“The United States seems not to be genuinely concerned about what is happening,” he complained. “What else would explain the recent Apache helicopters going to Egypt and the photo-op between Nabil Fahmy and Kerry?

“Unfortunately, the administration is behaving as if the Arab uprisings never occurred… and that all we care about is maintaining [the] Camp David [peace treaty between Egypt and Israel], passage through the Suez Canal, and counter-terrorism and forget about democracy and human rights.”

He added that Saudi Arabia, which hosted Obama last month during a key summit last month, and the United Arab Emirates were the main “cheerleaders and check-writers” for the regime and particularly its repression of the Brotherhood.

Along with Kuwait, the two Gulf monarchies have provided billions of dollars in aid. He also noted that Israel and its allies here have also lobbied in favour of continuing U.S. assistance.

CIA veteran analyst Paul Pillar, the government’s top Middle East intelligence officer from 2000 until his retirement in 2005, added that a combination of Israeli preferences and Islamophobia “has produced U.S. policy that has insufficiently recognised the repressive nature of the current Egyptian government.”

“Statements about how troubled we are will have little effect, coming at the same time the United States is partially resuming military aid to Egypt,” he told IPS via email.