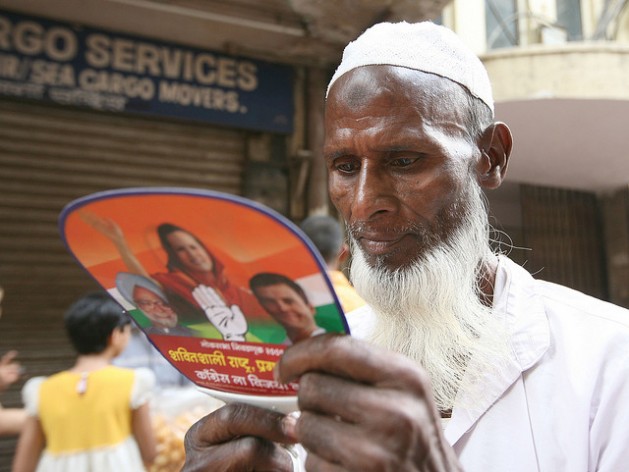 An Indian voter reads a political pamphlet distributed during a rally of the Indian National Congress in Mumbai. Credit: Al Jazeera English/CC-BY-SA-2.0

SECUNDERABAD, India, May 27 2014 (IPS) - Held in nine rounds over a period of several weeks, India’s national elections have been described as the most massive exercise in vote-casting worldwide.

The spectacle of witnessing some 814 million voters fan out among 935,000 polling stations that offered a choice between 1,600 political parties was undeniably exciting, but the results – when they were announced on May 16th – came as an unpleasant shock for those who’ve long admired India’s secular political traditions.

Even more troubling, some say, was that the the National Democratic Alliance (NDA) – the electoral coalition headed by the BJP – succeeded in bagging over three-fifths of all seats in the new Lok Sabha, the lower house of parliament.

"While the [BJP] walked off with 282 out of 543 seats, its voter share was a mere 31 percent of the population, representing a discrepancy of more than 20 percent."
The once-invincible Congress Party, which ruled India for the last two consecutive terms, was virtually decimated, its share of parliamentary seats whittled down to just 44, a fifth of its former size.

A veritable media storm followed the announcement of the results, with conservative pundits extolling the BJP’s win as a “landslide”, and others bemoaning India’s descent into consolidated right-wing rule.

But a closer look at the voting patterns tells a story of persistent communalism in 21st-century India, and suggests that elections in a country that has 1.2 billion people, over 120 linguistic groups, a sizeable proportion of adivasi (indigenous) people and a complex hierarchy of castes and sub-castes reflect, at best, a distorted democracy.

While the Muslim minority constitutes some 17 percent of the country’s total population, they are poorly represented in the new parliament, having secured only 20 out of 543 seats.

Fearing the BJP’s track record of aggravating religious tensions, most Muslims refrained from casting in their favour, maintaining a safe distance from the NDA as well.

This was particularly true of Muslims in the northern state of Uttar Pradesh, which holds 80 seats in the Lok Sabha.

Here, the BJP’s electoral strategy had banked on both communalism and caste politics. In the state’s northern Bahraich region, for instance, the party sought to reach out to Dalits and other low-caste Hindus by reviving the memory of an 11th century Hindu king, in the process direspecting the revered Muslim saint Ghazi Saiyyad Salar Masud whom the king had defeated in combat.

This, coupled with memories of gruesome communal riots that rocked the westen region of Muzaffarnagar last August and September – leaving nearly 100 dead and 40,000 displaced – resulted in Muslims giving the BJP and NDA candidates a wide berth.

Similar ghosts haunted other states as well, with memories of the 2002 anti-Muslim pogrom in the western state of Gujarat, which Modi ran as chief minister from 2001 to 2014, no doubt leading many people to refrain from voting for the BJP.

The BJP also received a cold shoulder in India’s populous southern states. In Tamil Nadu, for instance, the All India Anna Dravidian Progress Federation (AIADMK) led by Jayalalithaa won a landslide victory, seizing 37 of the state’s 39 seats while the BJP gained just one.

The Hindu nationalists were also trounced in the south-western state of Kerala and the two states of bifurcated Andhra Pradesh, the fifth-most populous region in India that boats a Hindu majority.

Karnataka is the one state in the south where the BJP has made significant inroads. Here, the concept of Hindutva – an ideology centered on Hindu supremacy – gained a foothold in the 1990s partly thanks to a communal campaign aimed at undermining the syncretic Hindu-Muslim worship at the 1,000-year-old old cave-shrine of the Sufi saint Dada Hayat.

In the past, Hindu nationalists mobilised to install images of a low-caste Hindu god in the shrine, and worked to undermine the position of the hereditary spiritual head of the shrine. Though loudly criticised, the campaign paid off. In the recent Lok Sabha elections, the BJP won 17 out of the state’s 28 seats.

Votes versus seats: an electoral discrepancy

While much of the post-election commentary has focused on Modi’s sweeping win, few have unpacked the discrepancies between the number of seats secured by the BJP and the share of votes actually cast in their favour.

In what is referred to as India’s ‘first past the post’ system, electoral seats ultimately count more than votes, resulting in a huge gap between the BJP’s victory and its popularity among the majority of Indian voters.

While the party walked off with 282 out of 543 seats, its voter share was a mere 31 percent of the population, representing a discrepancy of more than 20 percent.

Similar figures from individual states are even more startling: various local newspaper reports point to some six states where the Hindutva party won a number of seats that, in percentage terms, was double or nearly double the share of votes it obtained.

In Uttar Pradesh, for instance, the BJP’s vote-share was only 42.3 percent, yet it secured 71 out of 80 seats. In Rajasthan, only 54.9 percent of voters chose the party, yet it bagged every single seat in the state. In New Delhi, its voter share was 46.4 percent, and here again it walked off with all Lok Sabha seats.

Similar discrepancies were registered for the central Indian states of Madhya Pradesh and Chattisgarh, as well as the eastern state of Jharkhand.

Another distorting factor was the extent of corporate funding towards the BJP’s electoral campaign, to the point that they alone could muster huge advertisements in the country’s newspapers, undertake prolonged online advertising (including the use of social media) and gain almost limitless access to television stations.

This sustained media campaign was not, however, accompanied by a countrywide groundswell of popular support for Modi; in fact, a safe majority of the electorate cast their ballots for parties that stood opposed to the BJP’s Hindutva politics.

These facts should act as encouragement for the AIADMK and other regional parties likely to form a joint opposition bloc in India’s new parliament.