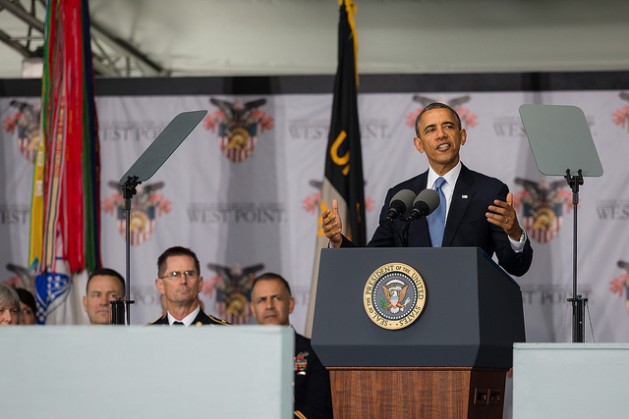 “U.S. military action cannot be the only – or even primary – component of our leadership in every instance,” President Obama told graduates at West Point on Wednesday May 28. Credit: West Point – The Military Academy/CC BY-NC-ND 2.0

WASHINGTON , May 28 2014 (IPS) - A supertanker sails a long way, they say, between the time the helmsman sets a new course and the moment when the vessel fully responds.

This was the task President Barack Obama took on this week, as he sought to set a new course for the U.S. ship of state in international waters.

What he said today in his commencement address at the U.S. Military Academy at West Point in New York was nothing less than turning the wheel hard over for U.S. foreign policy.

Even though, as commander-in-chief, he is the nation’s chief helmsman, it will be some time before the U.S. supertanker responds, and even then not necessarily on the new course Obama is trying to set. The balance of his presidency will show how well he can succeed.

To extend the metaphor, Obama must also navigate between the Scylla of critics who want the United States to continue to use military power as its principal tool of destiny, and the Charybdis of those who would like to see war abolished in favour of other, non-lethal instruments.

He has no lack of critics. Even before the last third of his speech, one leading U.S. news channel cut to an attack by one of Obama’s conservative Congressional adversaries. Another was ready to take Obama on while he still shaking the hands of newly commissioned army second lieutenants.

What is the president’s sin in the eyes of these naysayers?

Obama understands that the world has changed since the end of the Cold War, which saw the collapse of Soviet internal and external empires and European communism; the diffusion of power; the rise of new economic competitors and globalisation in general; and a shift from state monopoly of violence to what are euphemistically called “non-state actors.”

In fact, speaking in politically defensive-mode, Obama went to great lengths – perhaps too great – to argue that the U.S. “remains the one indispensable nation” and, tempting the lessons of history, that this “will likely be true for the century to come.”

He also paid the politically necessary homage to U.S. exceptionalism – “I believe in [it] with every fibre of my being” – but then usefully redefined it in terms of support for the rule of law and recognition that “more lasting peace…can only come through opportunity and freedom for people everywhere.”

In trying to defang critics who argue that Obama does not care for the use of military force, it was no accident that he spoke at West Point.

To be fair to critics who argue that Obama is less enamoured of the use of force than many of his predecessors, they have a point, at least in analysing his proclivities.

Indeed, if his approach to the outside world can be reduced to a single phrase – as is so often true of presidents – it would be “no useless wars.”

That injunction has surely coloured his successful withdrawal of U.S. forces from Iraq and the end of a U.S. combat role in Afghanistan at the end of this year (though he intends to leave some 9,800 troops behind, assuming that the new Afghan president agrees, as the likely winner has said he will do).

In fact, given that the 2003 invasion of Iraq remains one of the worst foreign policy blunders in U.S. history, and that no good U.S. national security interest has been served by our staying in Afghanistan as long as we have, Obama deserves credit for quieting most of his domestic critics as he has slowly extricated the U.S. from both military ventures.

Obama also used his speech to justify that the U.S. has not allowed itself to be sucked into the military conflict in Syria (where his stance has the support of most Americans, if not most of the Washington commentariat.)

He has also emphasised the U.S. choice of diplomacy over military power in dealing with the Iranian nuclear programme – though, in another mantra, he has stated: “we reserve all options to prevent Iran from obtaining a nuclear weapon.”

While he characterised Russian policy “toward former Soviet states” as “aggression,” and implied the same about Chinese behaviour in the South China Sea, Obama did project an ambiguous position, preferring to define the range of debate while leaving his own choices unclear.

Instead, the president laid out standards for judging.

On the one hand, “the United States will use military force, unilaterally if necessary, when our core interests demand it – when our people are threatened; when our livelihood is at stake; or when the security of our allies is in danger.”

Even so, we have to ask “tough questions about whether our actions are proportional and effective and just,” he added.

In other circumstances, the “threshold for military action must be higher,” and we should seek allies and partners, he said.

Then, in his one sally into alternatives – otherwise a notable lacuna in the speech – he said “We must broaden our tools to include diplomacy and development.”

Obama also tried to put the best face he could on what has so far been Russian president Vladimir Putin’s tactical victory in Ukraine (though, in all likelihood, a long-term Russian strategic defeat), by stressing all the things that the U.S. and others did to soften the blow.

The best parts of Obama’s speech – at least, let us hope, the most lasting – dealt with longer-running problems facing humankind: the importance of democracy and human rights; the empowering of civil society; the fight against extremism, the promotion of useful international institutions; the need to ratify the Law of the Sea Convention; and, as a unifying theme, the role of U.S. leadership in all these areas and more.

Yet he made only a passing reference to climate change, supposedly a hallmark of his agenda.

What was lacking, unfortunately, was “connective tissue” in terms of process, especially the need to relate regional apples and oranges to one another – a strategic approach and the setting of priorities.

While renewing the U.S. priority on countering terrorism, Obama failed to identify its sources in the Middle East or to discuss the risks of regional conflict “…as the Syrian civil war spills across borders.”

He did not propose means for resolving the new Russian challenge to George H.W. Bush’s goal of a “Europe whole and free” and at peace, or indicate that the U.S. would stop ignoring the continent.

Nor did he even mention recent Israeli-Palestinian peace efforts championed by U.S. Secretary of State John Kerry, or introduce what is supposedly a keystone of his foreign policy, the “pivot” or “rebalancing” towards Asia.

In the final analysis, the test of Obama’s foreign policy for the balance of his term will be whether he will finally begin integrating different elements of his approach, relate different instruments of power and influence to one another, upgrade strategic thinking in his administration, and place resources where the new world he conjures requires.

Obama’s only money item today was to ask Congress to spend five billion dollars more on counter-terrorism: instead these funds should just be taken from a Pentagon budget still out of balance with his goals.

The president should instead be directing money to non-military areas, beginning with diplomacy and development, which can enable him to meet the goals he usefully set forth at West Point.

But the U.S. “Supertanker-of-State” cannot be set firmly on a new course “on the cheap” or without a coherent set of strategies.