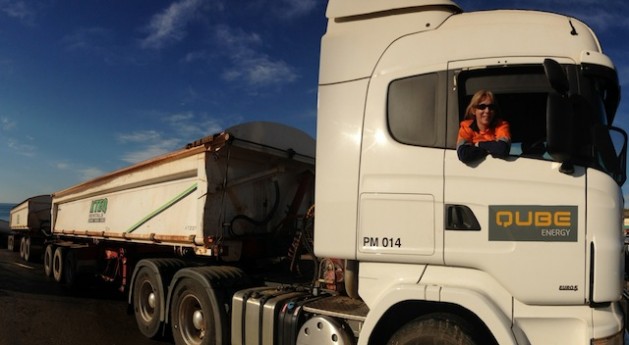 SYDNEY, May 23 2014 (IPS) - Growing up on a farm in the resource-rich, rugged landscape of Western Australia, Mel Murphy would often dream of driving the mammoth trucks that went whizzing past her property.

Today, the 38-year-old drives a FH 540 Volvo truck and is amongst a growing number of women who are boldly entering Australia’s massive mining sector as truck drivers.

Accounting for over 10 percent of the country’s gross domestic product (GDP), Australia’s resource sector – primarily iron ore, coal, uranium and gold – is one of the largest in the world, but when it comes to employment equality the industry falls short, with women making up a mere 15 percent of the mining workforce.

"When I first started, some people didn't think it was appropriate for a woman to be in this business and would refuse to speak to me or conduct business with me [...]." -- Heather Jones, owner of Success Transport.
According to the Australian Bureau of Statistics’ (ABS) labour force estimates for February 2014, only 40,079 out of a total of 271,237 persons employed in Australia’s mining industry are women.

Plagued by a shortage of skilled workers, the sector is now seeking women to fill a wide range of roles, from geologists, mine modellers, engineers and human resource managers to plant and equipment operators, accountants and personal assistants.

While trucking continues to be a male-dominated occupation within the sector, holding tight to its ‘boys’ club’ image, the 5,346 women who’ve managed to push their way into the business disagree.

By excelling at the arduous labour involved in trucking, these female drivers are the new face of equal employment in Australia.

For Murphy, a normal day begins before dawn, around 4.30 a.m., and constitutes 14 hours of work. She says her job entails both “line haul” – transporting heavy loads of freight between two points – and local driving, covering a distance of 5,000-7,000 km every week.

“This does not leave much time for anything other than sleep and preparing for the next day,” she told IPS.

Long hours on the road and the ‘fly-in, fly-out’ nature of the work pose challenges to balancing both career and family life. Most truck drivers reside in state capitals or coastal cities such as Perth or Brisbane, flying in and out of the mining towns for work.

Mining companies offer a wide range of roster arrangements, typically consisting of a set number of days on-site followed by some time off.

Murphy flies between her home in Perth, capital of the state of Western Australia, and the mining town of Karratha, located 1,535 km north.

“I work on a roster of four weeks’ work and 10 days off. When I am home, I make the most of being with my partner and family, focusing on their needs and just relaxing,” says Murphy, who enjoys the freedom solo driving offers and the variety of people she meets along the way.

In it for the long haul

Experts in the industry say women drivers are in high demand because they are said to have longer attention spans, and have a gentler touch on the gears and brakes. Advancements in technology have also resulted in user-friendly trucks that enable almost anyone to find comfort behind the wheel.

According to the ABS 2013 Australian Social Trends report, women made up 20 percent of truck drivers in the mining industry in 2011. But Murphy says, “Every now and then, I encounter some insecure male who feels threatened by my abilities and tries to put me down. This happens very rarely, but when it does, it makes me really sad.”

With more women joining the profession, sexism is less severe today than what it was when Heather Jones first began driving trucks over two decades ago.

“I have found if you treat the men you work with in the manner you would like to be treated, they mostly treat you the same in return. When I first started, some people didn’t think it was appropriate for a woman to be in this business and would refuse to speak to me or conduct business with me, and ask to speak to a man [instead],” she told IPS.

Jones grew up around motorbikes and cars, and was working as a secretary for a mining company when she made the spontaneous decision to exchange her typewriter for a seat behind the wheel. A single mother with two young daughters, she was initially attracted by the pay trucking offered.

Most truck drivers in Australia enjoy high salaries and reasonable job security, with those in mining towns earning close to 111,000 dollars (about 120,000 Australian dollars) a year.

Jones made the truck her mobile home and worked her way up to become a manager for a transport company before setting up her own, Success Transport.

Along the way she mastered the various skills necessary to survive on the long, remote roads, such as lying under the truck to fix a fan belt, or changing an 81-kg flat tyre.

“My time behind the wheel is my time to think, reflect and address business situations,” says Jones, who until recently employed 16 drivers, including sub-contractors, and had between 15 and 20 trucks on the road.

“I now have only one road-train truck stretching 50 metres long, and a pilot vehicle. Since the 2010 global financial crisis, mining has slowed down and I have lost about a third of my work,” she said.

Lyndal Denny, for instance, started her career at the age of 55 after three terrifying encounters involving trucks tailgating her small sedan on the Pacific Highway, the arterial road on Australia’s eastern seaboard plied by some 30,000 trucks each week.

The experience led her to become an advocate for road safety, and give up her white-collar job in exchange for driving road-train trucks.

Denny says she loves many things about the work, from the flexible daily routine to the “scenery, amazing wildlife and spectacular sunsets” one witnesses while travelling.

But life on the road is often fraught with risks, and entails enduring harsh conditions such as the 50-degree-Celsius heat, high humidity, the ochre dust that clings to one’s skin and hair and the omnipresent flies, bugs and mosquitoes.

For owner-operator Rosalie Hann there are other aspects of the business that are hard to deal with, such as maintaining regular compliance with strict regulations for public liability and duty of care.

“The paperwork consumes enormous amounts of time and energy,” the 41-year-old told IPS from her home in the industrial area of Karratha. “Working for oneself doesn’t always bring too many perks, and trucks and equipment cost an arm and a leg when something goes wrong. For example, I need to replace the two front steer tyres every eight months, which costs [over] 1,500 dollars.”

In the end, though, it’s all worth it.

“I love the freedom of being my own boss as an owner-driver and having my own space while driving. At night, I can just pull into a parking bay on the highway and enjoy the peace and quiet of the bush,” Hann added, gazing out over her yard, which doubles up as her home, office and parking garage.