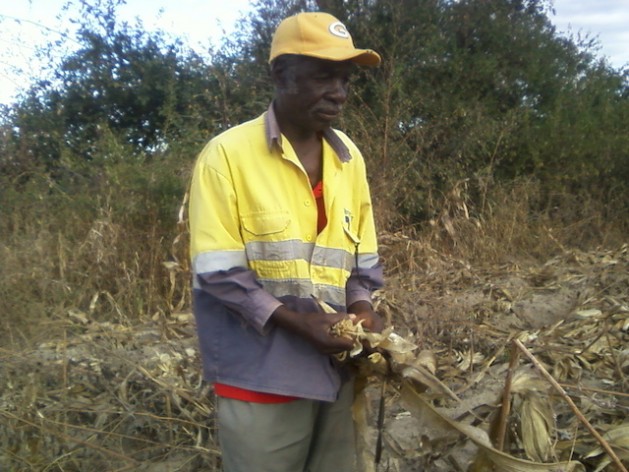 Joe Hamwata, a conservation farmer Pemba district, southern Zambia is one of the many vulnerable here bearing the blunt of climate change. Courtesy: Friday Phiri

LUSAKA, Jun 29 2014 (IPS) - It seems that churches in Zambia are becoming more pragmatic in their approach by advocating for better policies and training of vulnerable communities on climate change adaptation mechanisms.

Zambia is no stranger to the debate about whether churches should be involved in championing social rights considering their considerable influence on the country’s socio-political and economic agenda.

Grey Ngaba, a local environmental activist from Choma district in southern Zambia, told IPS that “churches have not been as active in championing climate justice, as they have been, on the political front.”

"We are not taking a confrontational approach but working as partners with government, using our church structures to influence change at both ends.” -- Reverend Suzanne Matale, general secretary of the Council of Churches in Zambia

Ngaba’s remarks seem to summarise a perception among some Zambians that the involvement of churches in climate change education has been lukewarm, save for their role in the provision relief to victims of climate-induced disasters such as floods.

“We are not only advocating for better policies but also training communities on the best ways to cope with the negative effects of climate change that are already taking a toll on various communities,” Reverend Suzanne Matale, general secretary of the Council of Churches in Zambia (CCZ), an denominational umbrella organisation of Christian churches, told IPS.

“As churches, we are concerned with the direction in which the world is moving especially with the continued denial by world leaders even when evidence suggesting otherwise is abound,” Matale said.

She explained that while some churches still emphasise prayer, CCZ believes in both prayer and action.

“We have over the years been involved in environmental justice especially in the extractive industry [tracking mining activities and benefits to ordinary citizens] — through our socio-economic program me, but in the last decade or so, climate change has become a significant component of our work,” said Matale.

However, some churches still portray climate change as the fulfilment of the biblical “end times” prophecy.

“Last year, when we had a prolonged drought, some churches organised a prayer meeting, but some of us had been trained that the changes we were experiencing had more to do with climate change,” Joe Hamwata, a conservation farmer in Pemba district, southern Zambia, told IPS.

Reverend Weston Simwinga of the United Church in Zambia (UCZ) of Maamba town is optimistic that the situation will change through relentless education, as the impacts of climate change are already visible.

“As an affiliate of CCZ, we have been sensitised on our role not only to close the knowledge gap, especially within the church, but to also to act as a watchdog on behalf of the people,” Simwinga told IPS.

The question that remains is whether the church’s climate justice campaign is bearing fruit on the political scene where the church yields considerable influence on policy makers in this southern African nation.

Matale answered the question in the affirmative by citing the development of a uranium mining policy in Zambia, which was the result of “CCZ research in 2009, on the dangers of uranium mining without a proper policy”. It compelled the government to propose a policy before proceeding with its uranium mining plans.

Matale highlighted CCZ’s focal point role in the African faith based organisations campaign dubbed: “We have faith – act for climate justice”, where over 200,000 signatures were collected across Africa demanding a “just and legally binding climate treaty” at COP 17 in South Africa, in 2011.

“Since then, we have not looked back. We are not taking a confrontational approach but working as partners with government, using our church structures to influence change at both ends,” Matale said.

She added: “We have so far trained several disaster risk reduction church committees who in turn carry out climate change adaptation activities in the community through tree planting, good forest management practices and sustainable agriculture, among others.”

Professor Prem Jain, the UNESCO chair in Renewable Energy and Environment, told IPS that the campaign is gaining momentum as “African governments share the sentiments of “polluter pays” principle demanding Africa’s share of resources to cope with climate shocks.”

On the tail end of all arguments are vulnerable communities bearing the brunt of climate change.

Hamwata concludes: “My maize produce last farming season dramatically reduced by over 100 percent due to prolonged drought. It is no longer a question of how we are affected, but how to cope with this change; it is an everyday reality for us farmers.”