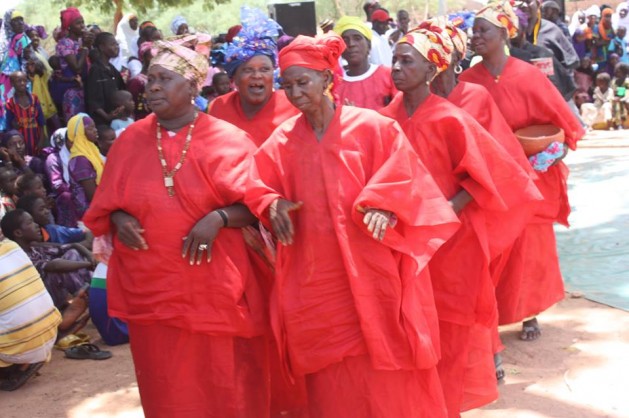 Circumcisers in the Gambia publicly declaring that they have abandoned the practice of FGM. Credit: Saikou Jammeh/IPS

BANJUL, Jul 13 2014 (IPS) - Women’s rights activists in the Gambia are insisting that more than 30 years of campaigning to raise awareness should be sufficient to move the government to outlaw female genital mutilation (FMG).

The practice remains widespread in this tiny West African country of 1.8 million people, but rights activists believe that their campaign has now reached the tipping point.

Two years ago, GAMCOTRAP, an apolitical non-governmental organisation (NGO) committed to the promotion and protection of women and girl children’s political, social, sexual, reproductive health and educational rights in The Gambia, and one of the groups behind the anti-FGM campaign, sponsored a draft bill which has been subjected to wide stakeholder consultations.

Several previous attempts to legislate against FGM have failed, with no fewer than three pro-women laws having had clauses on FGM removed from draft bills. But activists now appear determined to make the final push and hope that when introduced this time round, the bill will go through.

“We’ve caused lots of suffering to our women ... if my grandparents had known what I know today, they would not have circumcised anyone. Ignorance was the problem” – former circumciser Babung Sidibeh

The time has now come for final action, says Amie Bensouda, legal consultant for the draft bill. “There can be no half measures. The law has to be clear. It’s proposed by the law that FGM in all its forms is prohibited. This discussion cannot go on forever. The government should do what is right.”

“The campaign has reached its climax,” Dr Isatou Touray, executive director of GAMCOTRAP, told IPS. “A lot of work has been done. I am hopeful of having a law because women are calling for it, men are calling for it. I know there are pockets of resistance but that’s always the case when it comes to women’s issues.”

“In 2010, we organised a workshop for the National Assembly,” she continued. “They made a declaration, pledging to support any bill that criminalises FGM. I am happy to report that, since 2007, more than 128 circumcisers and 900 communities have abandoned the practice. This trend will continue to grow.”

Seventy-eight percent of Gambian women undergo FGM as a ‘rite of passage’. However, after more than three decades of the anti-FGM campaign in Gambia, a wind of change is blowing, sweeping even conservative rural communities.

Sustained awareness-raising programmes have resulted in public declarations of abandonment of FGM by hundreds of circumcisers. Babung Sidibeh, custodian of the tradition in her native Janjanbureh, the provincial capital of Central River Region, 196 kilometres from Banjul, was one of them. The old woman assumed the role after the death of her parents, but she has since “dropped the knife”, as no longer practising FGM is known here.

Sidibeh did so after receiving training in reproductive health and women’s rights. “Soon after we circumcised our children in 2011,” she told IPS, “Gamcotrap invited me for training. I was exposed to the harm we’ve been doing to our fellow women. If I had known that before what I know today, I would never have circumcised anyone.”

With a tinge of remorse, she added: “We’ve caused lots of suffering to our women. That’s why I told you that if my grandparents had known what I know today, they would not have circumcised anyone. Ignorance was the problem.”

Mrs Camara-Touray, a senior public health worker at the country’s heath ministry confirmed to IPS that her ministry has since taken a more proactive role on FGM.

She explained: “The ministry has created an FGM complication register. We’ve also trained nurses on FGM. Until recently, when you asked most health workers about the complications that can arise with FMG, they would say it has no complications. That’s because they were not trained. Since 2011, we’ve changed our curriculum to include these complications. After we put the register in place, within three months, we’d go to a region and see that hundreds of complications due to FGM had been recorded.”

In March, Gamcotrap organised a regional religious dialogue that sought to de-link FGM from Islam. Touray said that the workshop was a prelude to the introduction of the proposed law in parliament.

“Islamic scholars were brought together from Mali, Guinea, Mauritania and Gambia,” she told IPS. “We had a constructive debate and it was overwhelmingly accepted that FGM is not an Islamic injunction, it’s a cultural practice. It was recommended that a specific law should be passed and a declaration was made to that effect.”

However, there is resistance in some quarters. An influential group of Islamic scholars, backed by the leadership of the Supreme Islamic Council, continue to maintain that FGM is a religious injunction.

With a large following and having the ears of the politicians, these clerics have in recent times also intensified their pro-FGM campaign.

“It will be a big mistake if they legislate against FGM,” Ebrima Jarjue, an executive member of the Supreme Islamic Council, told IPS.

“Our religion says we cut just small. We should be allowed to practise our religion. If some people are doing it and doing it bad, let them stop it. Let them go and learn how to do it. If circumcising the girl child when she’s young is causing problems, then let’s wait until she grows up. That’s what used to happen.”

Meanwhile, the Women’s Bureau, the implementing arm of the Ministry of Women’s Affairs, is hesitant about legislating against FGM.

“As far FGM is concerned, the position of the Women’s Bureau is that there’s need for more sensitisation and dialogue to push the course forward,” Neneh Touray, information and communication officer of the Women’s Bureau, told IPS. She declined to comment on whether the bureau thought that the bill was premature.