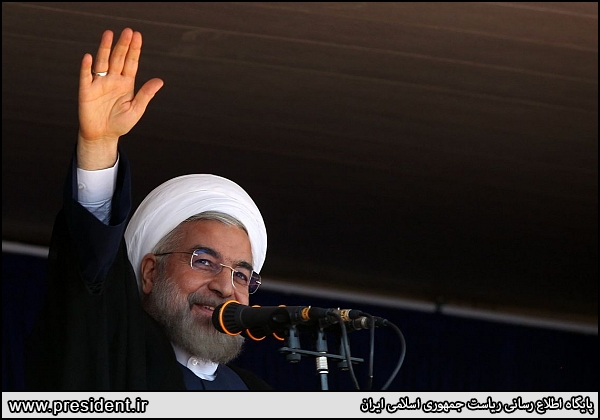 WASHINGTON, Aug 4 2014 (IPS) - When Hassan Rouhani was declared Iran’s president last year, large crowds gathered in the streets of Tehran to celebrate his surprise victory. But while hope for a better life persists, Iranians continue to face harsh realities.

“I think Rouhani has done a very good job,” Hassan Niroomand, the 62-year-old director of a steel company in Tehran, told IPS.

“There are certain factions within the regime that are not comfortable with the way things are moving forward and are trying to make it as hard possible for Rouhani to achieve his goals.” -- Ali Reza Eshraghi

“He does not have all the power, but he has taken advantage of what he can control and I am hopeful,” said Niroomand, citing Rouhani’s handling of the nuclear negotiations, his universal health insurance initiative, and his leadership style.

“He knows how to deal with extremists who are trying to make Iran another Afghanistan,” he added.

“Everyone says he is better than [former President Mahmoud Ahmadinejad], but I don’t see a difference,” said Fariba Hosseini, a 39-year-old part-time student who is currently unemployed.

“Prices are still high and girls are being bothered again about their veils,” she said, referring to Iran’s morality police who have taken to the streets in the sweltering summer heat to ensure women comply with clothing regulations.

“I don’t think life will get better,” she said.

Rouhani, a centrist cleric and former advisor to the Supreme Leader who was inaugurated one year ago today, promised to improve the economy, solve the conflict over Iran’s nuclear programme, and de-securitise the political environment.

Had his Foreign Minister Mohammad Javad Zarif failed to achieve the historic interim nuclear accord with world powers in November 2013, and had negotiations toward a final deal broken down, many more Iranians might share Hosseini’s pessimistic view.

But while Iran’s economy continues to limp due to previous governmental policies and sanctions, slight improvements have kept people looking forward to the future.

“Rouhani and his team’s efforts to reduce sanctions on Iran through the nuclear talks has so far prevented the further cutting of Iranian crude oil production and exports,” said Sara Vakhshouri, an energy expert and former advisor to the National Iranian Oil Company.

“The [sanctions relief] has not had an immediate significant effect on the economy, but it has certainly had a positive psychological impact on the people,” she said.

Iran’s oil exports, which fund nearly half of government expenditures, were slashed by more than half in 2012 following the imposition of stringent U.S. and EU sanctions targeting Iran’s oil and banking sector.

Iran’s currency, the rial, went into freefall, dropping by more than 50 percent in October 2012.

But since November’s interim deal, which halts Iran’s nuclear programme from further expansion in exchange for moderate sanctions relief, the rial has strengthened and inflation is down by more than half from over 40 percent a year ago, due in part to improved governmental policies.

The temporary sanctions relief on Iran’s petrochemical exports and the unfreezing of some of Iran’s assets abroad have also positively impacted the economy, according to Vakshouri, who noted that Rouhani has changed investment regulations to attract more international investors.

But potential investors will maintain their distance until the energy-rich country’s release from the strangulating sanctions becomes certain.

Meanwhile, international human rights organisations have decried the rise in executions since Rouhani took office, while the sentencing of journalists and activists who were apprehended during the Ahmadinejad era for political reasons continue under Rouhani’s watch.

Domestic news media has become more openly critical of the government, but a number of reformist-minded journalists have been detained in recent months.

Iran’s Culture Minister Ali Jannati made headlines last year when he said Iran’s ban on social networks including Facebook and Twitter should be lifted, but while he and Rouhani have publicly criticised the Islamic Republic’s control over people’s personal lives, leading conservative factions retain their hold on Iranian society.

The shocking Jul. 21 arrest of a Washington Post reporter, Jason Rezaian, with his wife, Yeganeh Salehi, also a reporter, has led many to speculate that domestic political infighting has resulted in the 38-year-old Iranian-American being used as a pawn.

The location of Rezaian, an Iranian resident, remains unknown despite outcry in the U.S. from the State Department and multiple rights-focused organisations.

Iran does not recognise dual citizenship and no charges have been announced.

Analysts have argued that Rezaian could have been detained to embarrass Rouhani ahead of the resumption of talks in September.

“There are certain factions within the regime that are not comfortable with the way things are moving forward and are trying to make it as hard possible for Rouhani to achieve his goals,” said Ali Reza Eshraghi, a former editor of several Iranian reformist dailies.

“Jannati summed the situation up well when he said that the only thing that has changed in Iran is the executive branch,” Eshraghi, the Iran project manager at the U.S.-based Institute for War and Peace Reporting, told IPS.

Yet Eshraghi points out that while Rouhani may have no control over the judicial and legislative branches, he has proven adept at closed-door negotiations.

“Rouhani and his team have a modernising agenda, but they are not pursing it through radical statements or intense pressure on their political opponents. He is quietly negotiating and making pacts,” he said.

While Eshraghi sees the election as having energised activists to pressure Rouhani to force change despite his inability to do so, he also believes average Iranians remain patient.

“People have modest expectations, they are realistic about Rouhani’s ability to achieve his goals,” he said.

It remains to be seen how long Iranian patience will last, especially if the Rouhani government fails to secure a nuclear deal resulting in substantial sanctions relief.

Thus far Iran’s Supreme Leader Ali Khamenei, who has maintained his distaste and lack of trust of the U.S., has voiced support for Iran’s negotiating team. But while Iran seeks a final deal on the international stage, the domestic negotiating front appears to be getting tougher.

“Jason was trying to colorise the very black and white frame that Western mainstream news media has used for Iran,” said Eshraghi.

“His arrest ironically indicates that there are certain factions inside the country who are very happy with that framing.”