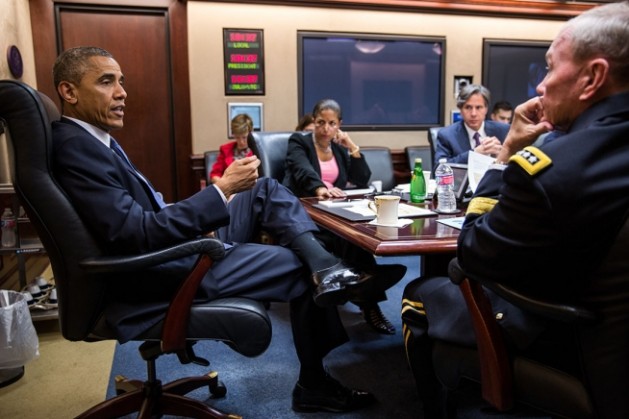 While Republican hawks have welcomed the move in hopes it may presage a much broader regional intervention in Syria, as well as in Iraq, many Democrats expressed worries that the decision, unless strictly confined to its “humanitarian” objectives, could become a “slippery slope” into a new quagmire just three years after Obama extracted the last U.S. combat troops from Baghdad.

“We know that our military intervention will not alone solve the long sectarian and religious conflicts in Iraq,” said California Rep. Loretta Sanchez in reacting to the announcement. “It is essential we avoid mission creep because our men and women in uniform cannot endure another war in Iraq and nor can the American people.”

Obama’s announcement capped a week in which forces of the radical Islamic State in Iraq and the Levant (ISIL) made sweeping gains in northern Iraq, coming within as little as 45 kms of Kurdistan’s capital, Erbil, and triggering a new flood of refugees from predominantly Christian and other minority communities that had been protected by the Kurdish peshmerga militias which withdrew in the face of ISIL’s onslaught.

Particularly dramatic was the plight of tens of thousands of Yezidis, followers of an ancient religion tied to Zoroastrianism, who fled to Mt. Sinjar to escape ISIL’s forces and have been besieged there for days without adequate supplies of food and water.

In his remarks Thursday, Obama cited their plight as one of two main justifications – the other being the protection of the several hundred U.S. diplomatic and military personnel who are based in the Kurdish capital — for his decision to authorise the deployment of U.S. warplanes both to carry out “targeted strikes” against ISIL positions “should they move toward [Erbil],” provide relief to the besieged Yezidis “to prevent a potential act of genocide,” and increase military aid to both the peshmerga forces and Iraq’s army.

He announced that U.S. aircraft had already begun providing “humanitarian airdrops of food and water” on Mt. Sinjar and was consulting with other countries and the U.N. on how best to alleviate the situation, presumably by working with Turkey to open a land corridor for the Yazidis to reach a safe haven across the border.

The Pentagon subsequently announced that it carried out two rounds of air strikes against ISIL targets Friday.

Obama’s actions were offered qualified praise by Republican hawks who have harshly criticised the president for months for not doing more, including using air power, to bolster Iraqi government and Kurdish forces in the face of ISIL’s initial takeover of most of Anbar Province and its subsequent sweep into much of northern Iraq, including Mosul, the country’s second largest city.

“The President is right to provide humanitarian relief to the Iraqi civilians stranded on Mount Sinjar and to authorise military strikes against forces that are threatening them, our Kurdish allies, and our own personnel in northern Iraq,” said Republican Sens. John McCain and Lindsey Graham in a joint statement. “However, these actions are far from sufficient to meet the growing threat that ISIS [another name for ISIL] poses.”

Calling for a “comprehensive strategy to degrade ISIS,” the Senate’s two leading hawks added that it “should include the provision of mitiary and other assistance to our Kurdish, Iraqi, and Syrian partners who are fighting ISIS, …U.S. air strikes against ISIS leaders, forces and positions both in Iraq and Syria; (and) support to Sunni Iraqis to resist ISIS.”

“And none of this should be contingent on the formation of a new government in Baghdad,” they added in a slap at the administration’s insistence that U.S. military aid to the Shi’a-dominated government currently headed by Prime Minister Nouri al-Maliki be calibrated according to the degree that any new government – whose composition is currently the subject of intense negotiations in Baghdad — demonstrates its commitment to sharing power with the Sunni minority from which ISIL derives its popular support, as well with the Kurds.

But in his remarks Thursday night, Obama insisted that he would stick to his conditions for providing more assistance to Baghdad.

“Iraqi leaders need to come together and forge a new government that represents the legitimate interests of all Iraqis, and that can fight back against the threats like ISIL,” he said. “Once Iraq has a new government,” he added, “the United States will work with it and other countries in the region to provide increased support to deal with this humanitarian crisis and counter-terrorism challenge.”

He also tried to reassure Democrats, as well as a war-weary public, that his latest decisions would not result in a major new military commitment. “As Commander-in-Chief, I will not allow the United States to be dragged into fighting another war in Iraq,” he stressed. “The only lasting solution is reconciliation among Iraqi communities and stronger Iraqi security forces.”

That declaration did not reassure some, however. While virtually no one criticised the mission to aid the besieged Yezidis, the decision to carry out air strikes was greeted with considerably less enthusiasm among many Democrats and critics of the 2003 Iraq war.

“When we bomb ISIS, which is a horrible group, we have to realise that we are heading down the path of choosing sides in an ancient religious and sectarian war inside Iraq,” warned Massachusetts Rep. Jim McGovern, key sponsor of a resolution that was approved last month by a 370-40 margin in the House of Representatives that requires Congress to authorise any sustained deployment of U.S. combat troops to Iraq.

“The impulse to aid the Yezidis is understandable, but the commitment to help them could easily become open-ended and drag the United States back into the Iraqi quagmire,” Harvard Prof. Stephen Walt, a leading foreign policy “realist”, told IPS. “Airdrops of relief aid will save Yezedi lives, but airpower cannot determine Iraq’s political future.”

While conceding that he, too, was “nervous about what could be the next step that could lead us to get more deeply involved,” another prominent realist and a former top Middle East analyst for the Central Intelligence Agency, Paul Pillar, the administration’s decision to use airpower against ISIL to defend the Kurds – even if it was billed as protecting U.S. personnel in Erbil – was sound.

“I think the administration is on defensible ground by using lethal force to prevent further inroads against the de facto Kurdish state …while not getting any more deeply immersed in the intra-Arab conflicts in the rest of Iraq that have sectarian dimensions and that can only be a lose-lose situation for the United States,” Pillar told IPS.

“There clearly is a slippery-slope hazard that we have to be mindful of, and all indications are that the administration is very mindful of it.”