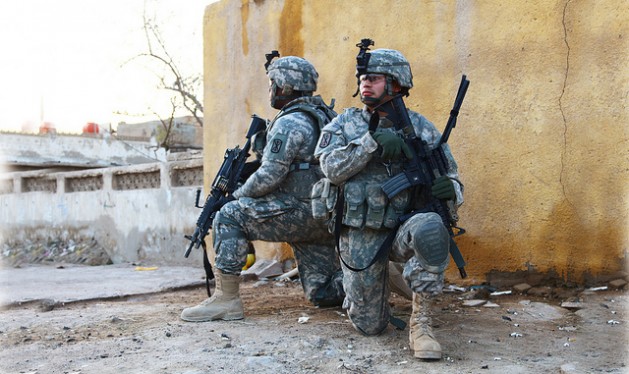 WASHINGTON, Jun 21 2014 (IPS) - Despite their ubiquity on television talk shows and newspaper op-ed pages, neo-conservatives and other hawks who propelled the U.S. into war in Iraq 11 years ago are falling short in their efforts to persuade the public and Congress that Washington needs to return.

Indeed, in contrast to the uncritical position taken by virtually all of the country’s media in the run-up to the 2003 invasion, a number of mainstream outlets are openly questioning the advice now being dispensed by the hawks about what to do about the dramatic advances by radical Sunni Islamists across northern and central Iraq over the last ten days.

The most stunning example – if, for no other reason that it took place on the hawks’ favourite news channel – came this week when Fox News anchor Megyn Kelly introduced former Vice President Dick Cheney as “the man who helped lead us into Iraq in the first place.”

“It’s a lonely job being an interventionist these days.” -- Washington Post reporter Dana Milbank
“You said (former Iraqi President) Saddam Hussein had weapons of mass destruction,” she said. “You said we would be greeted as liberators. You said the (Sunni) insurgency was in the last throes, back in 2005. And you said after our intervention that extremists would have to ‘rethink their strategy of jihad.’ Now, with almost one trillion dollars spend there, with 4,500 American lives lost there, what do you say to those who say, ‘You were so wrong about so much at the expense of so many’?”

“Well,” Cheney, who had just co-authored a Wall Street Journal op-ed with his daughter, Liz Cheney, in which they had used the same phrase to describe President Barack Obama’s policy, replied. “I just fundamentally disagree, Reagan – uh, Megyn.”

Similarly, the normally staid and respectful New York Times published what could only be described as a mocking profile of Bush’s former U.N. ambassador, John Bolton, for his tirades against Obama’s policies. The article referred to the “homecoming week for the Bush administration” featuring a “cavalcade of neoconservatives newly emerged on cable television and in hawkish policy seminars to say ‘We told you so’ on Iraq.”

And when Republican Sen. John McCain, perhaps the strongest voice in Congress for intervention in Syria, called on the Senate floor for “immediate action” against the forces of the Islamic State of Iraq and the Levant (ISIL) to prevent their further advance toward Baghdad, Washington Post reporter Dana Milbank asked simply, “When John McCain makes a case for war, does anyone hear him?”

Indeed, the scepticism that has greeted the Iraq war hawks over the past week has been so strong that Michael Rubin, a colleague of Bolton’s at the American Enterprise Institute (AEI) – the neo-conservative think tank that played a leading role in both planning and cheerleading the 2003 invasion — felt compelled to complain about “Media McCarthyites” who are allegedly stifling legitimate policy debate.

But, as Milbank pointed out, “It’s a lonely job being an interventionist these days.” Polls over the past several years have consistently shown a public that is more than war-weary. Disillusionment has grown not only with Washington’s military interventions in both Iraq and Afghanistan, but also with the effectiveness of U.S. military power in general.

A poll conducted by Ipsos/Reuters last week found that 55 percent of respondents opposed U.S. military intervention of any kind, while only 20 percent supported it, and that there was little difference between self-identified Republicans and Democrats.

Those trends have clearly damaged the political standing and credibility of the hawks, especially those – such as Cheney, Bolton, former Undersecretary of Defense Paul Wolfowitz, Weekly Standard Editor Bill Kristol – who played such prominent roles in promoting the Iraq war and are now calling for renewed intervention, at least in the form of air strikes, if not re-introducing U.S. combat forces.

Their diminished influence was made clear already nine months ago when they failed to rally lawmakers – even most Republicans – behind air strikes against military and other government targets in Syria after Obama accused Damascus of carrying out a chemical-weapons attack that killed hundreds of civilians.

The hawks now face a similar problem on Iraq. Thus far, even the Republican leadership in Congress appears satisfied with the steps announced by Obama Thursday – enhanced aerial surveillance by U.S. drones and aircraft and the dispatch of up to 300 military advisers to help reverse ISIL’s advance, possibly in preparation for air strikes against targets deemed threatening to U.S. national-security interests.

Washington is also pressing Prime Minister Nouri Al-Maliki, whom virtually all observers here blame for systematically alienating Iraq’s Sunni population, to renounce a third term or agree to share power in a way that can swing major sectors in the Sunni opposition to the government’s side.

While most Iraq specialists here have insisted that air strikes or any additional U.S. military commitment be conditioned on Maliki’s agreement to these terms, as well as a major diplomatic effort designed to enlist the help of Iraq’s neighbours – most importantly Iran and Saudi Arabia – in stabilising the country, the hawks have argued that Washington lacks the military leverage (meaning tens of thousands of U.S. troops) to bring about such a solution.

For this, they blame Obama’s decision to withdraw all U.S. troops in 2011 after the Iraqi parliament declined to act on a deeply unpopular Status of Forces agreement (SOFA) that would have provided legal immunity to any remaining U.S. forces.

Indeed, consistent with their more general efforts at depicting Obama’s foreign policy as one of weakness and retreat, the hawks have focused most of their commentary on the withdrawal decision as the cause of the current crisis – as opposed to their own responsibility for the 2003 invasion and its consequences, including the destruction of the Iraqi state and the rise of sectarianism – than on what the U.S. should do now in the face of ISIL’s offensive.

Israel-centred neo-conservatives are especially worried about the administration’s interest in engaging Iran on Iraq, a development that began last week with a high-level – albeit brief – meeting alongside ongoing international talks on Tehran’s nuclear programme.

When a prominent Republican hawk, Sen. Lindsey Graham, endorsed the notion that Tehran, which, like Washington, has supported the Maliki government, could play a key role in dealing with ISIL – thus giving the administration political cover for pursuing the option – neo-conservatives objected vehemently.

“The idea that the United States, a nation bent on defending democracy and safeguarding stability, shares a common interest with the Islamic Republic of Iran, a revolutionary theocracy that is the No. 1 state sponsor of terrorism in the world, is as fanciful a notion that Neville Chamberlain and Adolf Hitler could work together for the good of Europe,” wrote neo-conservatives Michael Doran, a top Bush Middle East aide, and Max Boot of the Council on Foreign Relations (CFR) in the Washington Post.

That theme was picked up by the Cheneys who wrote that “only a fool” would engage Iran on Iraq, ignoring the “reality” – as former Secretary of State James Baker (and Dick Cheney’s colleague in the Bush I administration) – put it, “that Iran is already the most influential external player in Iraq and so any effort without Iranian participation will likely fail.”

Of course, one of the many unintended consequences of the 2003 invasion and the Shi’a ascendancy during the U.S. occupation was to move Iraq much closer to Iran.