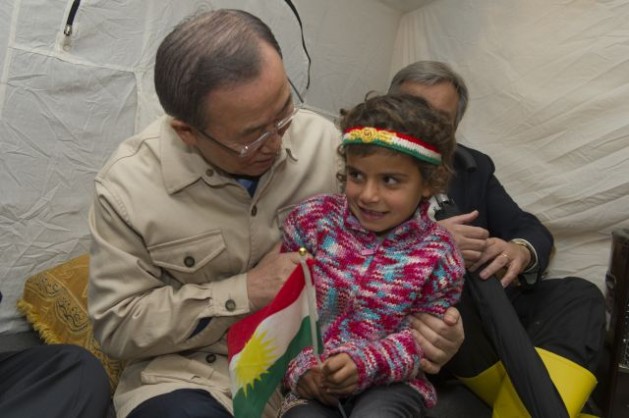 In January, Secretary-General Ban Ki-moon visited the Kawrgosik Refugee Camp near Erbil, in the Kurdistan region of Iraq, where more than 200,000 refugees from Syria are being hosted by the regional government. Credit: UN Photo/Eskinder Debebe

UNITED NATIONS, Jul 28 2014 (IPS) - As the ambulance stopped in Iraq’s northern city of Kirkuk, people rushed in to help. They unloaded six children, from several months to 11 years old, all injured allegedly by an air attack in the neighbouring town of Tuz Khurmatu.

“The situation in Iraq is grave,” said Tirana Hassan, senior emergencies researcher at Human Rights Watch, recalling a scene she witnessed during a recent research trip there.

“Families, including those with children, are stuck in the middle of an increasingly violent war and they are paying the price." -- Tirana Hassan

“Families, including those with children, are stuck in the middle of an increasingly violent war and they are paying the price,” she told IPS.

Nearly two months since the outbreak of violence between Islamist militants and Iraqi government forces, civilian casualties have surged. In June alone, 1,500 people were killed, the highest in a month since 2008, the United Nations Assistance Mission for Iraq (UNAMI) said.

“In all conflict-affected areas, child casualties due to indiscriminate or systematic attacks by armed groups and by government shelling on populated areas have been on the rise,” said UNAMI.

Activists have also reported child casualties caused by government airstrikes against fighters from the Islamic State in Iraq and the Levant (ISIS).

“We documented multiple cases of barrel bombs being used in Fallujah that had killed children and women,” Hassan said. “Using indiscriminate weapons in areas where children and their families are living is a violation of international law.”

Iraq has now become one of the most dangerous places on earth to be a child. UNAMI said it has also documented “systematic and egregious violations” by the Islamic State against children, including sexual violence and rape, killing and physical violence, forced recruitment.

The newly reported violence and casualties are the continuation of children’s suffering in Iraq in the past decade. More than 7,800 civilians were killed last year, the highest since the U.N. started a systematic count of civilian casualties in the country in 2008, according to a U.N. report.

Among these casualties, 248 were children, which were caused by the Islamic State and Al-Qaida in Iraq, the U.N. said. According to the Iraqi government, the number could be even higher, with 335 children killed and 1,300 injured.

By early June, at least 1.2 million Iraqis had fled their homes because of the violence, most seeking refuge in temporary housing, internally displaced persons’ (IDP) camps or with local host families, according to the U.N.

“A large number of IDP children are in dire need of assistance,” Alec Wargo, programme officer at the Office of the Special Representative of the U.N. Secretary-General for Children and Armed Conflict, told IPS.

He added that there have been reports of children who have been recruited by the insurgents and armed groups being killed or injured in fighting. The U.N. and the Iraqi government have been working to deal with the situation, he said.

So far there has been no official report about the situation of the children in areas under the Islamic State’s control, but Wargo said it “does not look good.” In the areas controlled by the government, the U.N. has said it is seriously concerned over the government’s inadequate attention to the impact of the conflict on children.

According to the U.N., violence against children in Iraq could be underreported, especially abduction cases, due to the difficulties in collecting information and the families’ reluctance to report to the police.

There are no official statistics on the number of children recruited as soldiers, but UNAMI said it has received reports of children being recruited by all sides of the conflict, including by government-affiliated forces. They have been used as informants, in some cases as suicide bombers, for manning checkpoints and for fighting, it said.

“Even though the government of Iraq does not have control over some of the country, it still has a prime responsibility to respect and protect the rights of children, and prevent their unlawful military recruitment and use,” Richard Clarke, Director of Child Soldiers International, told IPS.

The London-based organisation works to prevent the recruitment of children as soldiers and support their rehabilitation.

“The government must take all necessary legal, policy and practical measures to end and prevent child recruitment by the forces under its control and should seek the assistance of international organizations to achieve this,” Clarke said.