Ban Ki-moon is Secretary General of the United Nations.

UNITED NATIONS, Sep 17 2014 (IPS) - On Sep. 23, I have invited world leaders from government, business, finance and civil society to a Climate Summit in New York so they can show the world how they will advance action on climate change and move towards a meaningful universal new agreement next year at the December climate negotiations in Paris.

This is the time for decisive global action. I have been pleased to see climate change rise on the political agenda and in the consciousness of people worldwide. But I remain alarmed that governments and businesses have still failed to act at the pace and scale needed. 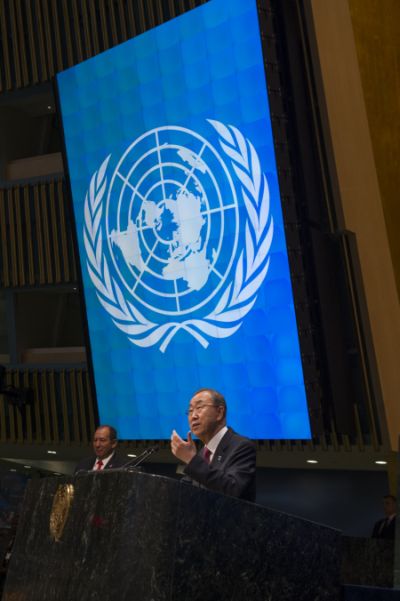 But I sense a change in the air. The opportunity for a more realistic dialogue and partnership has arrived. Ever more heads of government and business leaders are prepared to invest political and financial capital in the solutions we need. They understand that climate change is an issue for all people, all businesses, all governments. They recognise that we can avert the risks if we take determined action now.

I am convening the Climate Summit more than a year before governments head to Paris to give everyone a platform to raise their level of ambition. Because it is not a negotiation, the Summit is a chance for every participant to showcase bold actions and initiatives instead of waiting to see what others will do.

An unprecedented number of heads of state and government will attend the Summit. But it is not just for presidents and prime ministers. We have long realised that while governments have a vital role to play, action is needed from all sectors of society.

That is why I have invited leaders from business, finance and civil society to make bold announcements and forge new partnerships that will support the transformative change the world needs to cut emissions and strengthen resilience to climate impacts.

The sooner we act on climate change, the less it will cost us in lost lives and damaged economies. Economists are also showing that new technological advances and better policies that put a price on pollution mean that moving to a low-carbon economy is not only affordable, but can spur economic growth by creating jobs and business opportunities.

Instead of asking if we can afford to act, we should be asking what is stopping us, who is stopping us, and why? Let us join forces to push back against sceptics and entrenched interests. Let us support the scientists, economists, entrepreneurs and investors who can persuade government leaders and policy-makers that now is the time for climate action. Change is in the air. Solutions exist. The race is on. It’s time to lead.