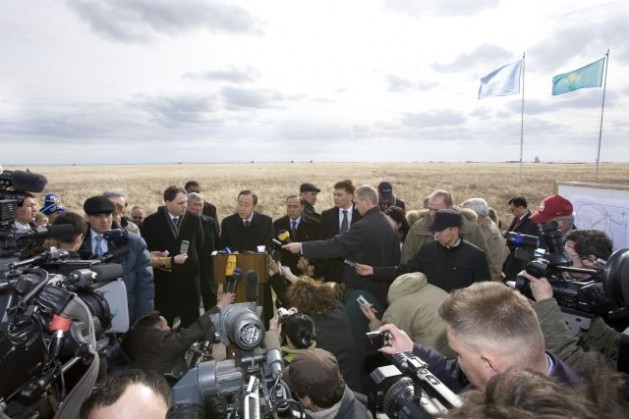 Secretary-General Ban Ki-moon reads a statement to the media after visiting Ground Zero of the Semipalatinsk Nuclear Test Site in April 2010. He urged all the leaders of the world, particularly nuclear weapon states, to work together with the United Nations to realise the aspiration and dream of a world free of nuclear weapons. Credit: UN Photo/Eskinder Debebe

UNITED NATIONS, Oct 9 2014 (IPS) - U.N. Secretary-General Ban Ki-moon last month singled out what he described as “one of the greatest ironies of modern science”: while humans are searching for life on other planets, the world’s nuclear powers are retaining and modernising their weapons to destroy life on planet earth.

“We must counter the militarism that breeds the pursuit of such weaponry,” he warned.

"What are we supposed to do? Roll over and let the crackpot realists take us all to hell? I don't think so." -- Dr. Joseph Gerson

With a slew of events lined up beginning next April, 2015 may be a make-or-break year for nuclear disarmament – either a streak of successes or an unmitigated failure.

The critically important Nuclear Non-Proliferation Treaty (NPT) Review Conference, which takes place every five years, is high up on the agenda and scheduled for April-May next year.

Around the same time, there will be an international civil society conference on peace, justice and the environment (Apr. 24-25) in New York, and a major international rally and a people’s march to the United Nations (Apr. 26) by peace activists, along with non-violent protests in capitals around the world.

The year 2015 also commemorates the 70th anniversary of the U.S. atomic bombings of Hiroshima and Nagasaki, stirring nuclear nightmares of a bygone era.

And it marks 45 years since the first five nuclear powers, the United States, Britain, France, China and Russia (P-5), agreed in Article VI of the NPT to undertake good faith negotiations for the elimination of their nuclear arsenals.

Additionally, anti-nuclear activists are hoping the long postponed international conference on a nuclear-weapons-free-zone in the Middle East, agreed to at the Review Conference in 2010, will take place in 2015.

A network of international non-governmental organisations (NGOs), which will take the lead role in the events next year, will also present a petition, with millions of signatures, calling for the abolition of nuclear weapons.

The network calls itself ‘the International Planning Group for the 2015 NPT Review Mobilisation: For Abolition, Climate and Justice.’

Should the 2015 Review Conference fail to mandate the commencement of abolition negotiations, “the treaty itself could fail, accelerating nuclear weapons proliferation and increasing the likelihood of a catastrophic nuclear war,” warns the network.

Asked whether any progress could be achieved in the face of intransigence by the world’s nuclear powers, Dr. Joseph Gerson, co-convenor of the international network, replied, “But what are we supposed to do? Roll over and let the crackpot realists take us all to hell?

Certainly, prospects for the NPT Review are anything but rosy, warned Gerson, director of the peace and economic security programmes at the AFSC’s Northeast region.

“But among other things, having witnessed the debate during last year’s High Level Meeting (HLM) on Disarmament and the responses of governmental representatives during the Conference on the Human Consequences of Nuclear Weapons, I do take hope in knowing that our civil society movements are not alone in our struggle for abolition,” he added.

The international network says the last 2010 NPT Review Conference reaffirmed “the unequivocal undertaking of the nuclear-weapon States to accomplish the total elimination of their nuclear arsenals leading to nuclear disarmament.”

Five more years have passed and another Review Conference is in the offing. Still, nuclear stockpiles of “civilisation-destroying” size persist, and even limited progress on disarmament has stalled.

“All nuclear-armed states are modernising their nuclear arsenals, manifesting the intention to sustain them for decades to come,” it notes.

The network also says nuclear-armed countries spend over 100 billion dollars per year on nuclear weapons and related costs. Those expenditures are expected to increase as nuclear weapon states modernise their warheads and delivery systems.

Spending on high-tech weapons not only deepens the reliance of some governments on their nuclear arsenals, but also furthers the growing divide between rich and poor.

In 2013, 1.75 trillion dollars was spent on militaries and armaments – more than the total annual income of the poorest third of the world’s population.

Jackie Cabasso of the Western States Legal Foundation and also a co-convener of the international network said the nuclear powers have “refused to honour their legal and moral obligation to begin negotiations to ban and completely eliminate their nuclear arsenals”.

“As we have seen at the United Nations High-Level Meeting for Disarmament and at the Oslo and Nayarit Conferences on the Human Consequences of Nuclear Weapons, the overwhelming majority of the world’s governments demand the implementation of the NPT,” she said.

“We are working with partner organisations in the U.S. and other nations to mobilise international actions to bring popular pressure to bear on the 2015 Review Conference,” Cabasso said.

She said the 2015 mobilisation will highlight the inextricable connections between preparations for nuclear war, the environmental impacts of nuclear war and the nuclear fuel cycle, and military spending at the expense of meeting essential human needs.

Gerson told IPS, “In my lifetime, despite the stacked decks and long odds, I’ve seen and been privileged to play small roles in overcoming the Jim Crow apartheid system, the end of the Vietnam War, and the end of South African apartheid systems and dynamics that before they became history seemed at times almost insurmountable.

“I can still easily tap into the emotions of 1971 and 1972 during the Christmas bombings, when the world seemed so black as the bombs rained death on Vietnam despite our having done everything that we could imagine to do to end the war.”

In each of these cases, “unexpected developments and powerful human will brought the change for which we had sacrificed and struggled,” said Gerson, a member of the board of the International Peace Bureau and of the steering committee of the ‘No to NATO/No to War’ network.

He said the bleak scenario includes the reality that all of the nuclear weapons states are modernising their nuclear arsenals.

At the same time, there is collaboration among the P-5 in resisting the demands of the majority of the world’s nations to fulfill their Article VI commitments and a renewed era of confrontation spurred by NATO and European Union expansion and Russian President Vladimir Putin’s responses, including mutual nuclear threats.

Gerson said the dynamics in East Asia are reminiscent of those in Europe in the years leading to World War I – and all of these carry the threat of catastrophic war and annihilation.

“I know that the law of unintended consequences means that we can never truly know what the consequences of our actions will be,” he added. “That said I trust that our mobilisation will stiffen the moral backbones and give encouragement to a number of diplomats and governmental actors who are our potential allies.”

And hopefully, it will also provide the forums and opportunities for movement leaders and activists to think and plan together through mainstream and social media to revitalise popular understandings of the imperative of nuclear weapons abolition, he said.

At the same time, he is hoping the nuclear weapons abolition movement will expand for the longer term, including building alliances with climate change, economic and social justice movements.

“Through our work with students and young people, [we will] help generate the next generation of nuclear abolitionists, even as we race the clock against the dangers of nuclear war.”