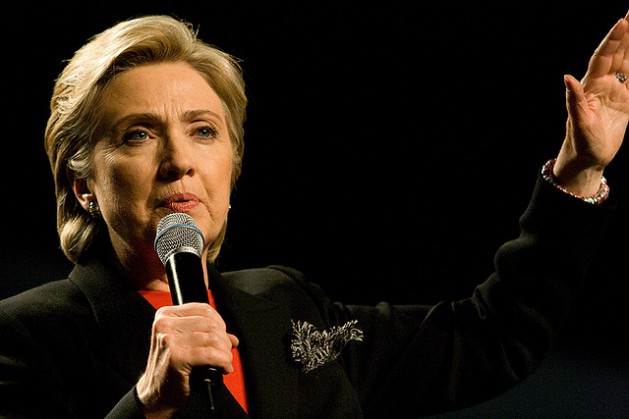 Hillary Clinton "is positioning herself to the right of the (Barack) Obama administration on foreign policy issues,” the report notes. Credit: Brett Weinstein/cc by 2.0

WASHINGTON, Oct 15 2014 (IPS) - Despite the public’s persistent war weariness, the U.S. defence budget – the world’s biggest by far – may be set to rise again, according to a new study released here this week by the Center for International Policy (CIP).

The 41-page study, “Something in the Air: ‘Isolationism,’ Defense Spending, and the U.S. Public Mood,” concludes that the current political moment appears similar to those between 1978 and 1982 and between 1998 to 2001 when defence spending spiked upwards after periods of substantial declines.

Even if the defence budget does indeed increase over the next few years, it should not be taken as a popular mandate for military activism, particularly for protracted military commitments of large numbers of ground troops.

“Already the leading Democratic contender for the presidency is positioning herself to the right of the [Barack] Obama administration on foreign policy issues,” wrote the study’s author, Carl Conetta, in a reference to former secretary of state Hillary Clinton. “This will move media and expert discourse in a more hawkish direction.”

While these factors, as well as warnings by military leaders and their supporters in Congress of a “hollowing” of the country’s armed forces, are consistent with historical precedent, the public may still resist higher military budgets due to the slowness of the economic recovery, according to Conetta, a veteran defence analyst who heads CIP’s Project for Defence Alternatives.

But even if the defence budget does indeed increase over the next few years, it should not be taken as a popular mandate for military activism, particularly for protracted military commitments of large numbers of ground troops given the persistent public disillusionment with the wars in Iraq and Afghanistan, according to Conetta. He noted that some 15 years elapsed between the end of the Vietnam War and the public’s rallying behind a major military operation: the first Gulf War in 1991.

The study, which includes an extensive analysis of polling data over the last few decades, as well as trends in defence spending, comes less than a month before mid-term Congressional elections. The Republicans, who have become markedly more hawkish than just a year ago when many of them opposed U.S. military retaliation for Syria’s use of chemical weapons, are expected to gain control of the Senate, as well as retain their majority in the House of Representatives.

It also comes as the Obama administration struggles to cope with a number of difficult foreign-policy challenges – most recently, the conflict between Russia and Ukraine and, more spectacularly, the alarming gains by the Islamic State of Iraq and the Levant (ISIL) in Iraq and Syria and its well-publicised brutality against minorities and western captives (notably, the beheadings of U.S. reporters and aid workers) — against which a reluctant president has felt compelled to react with air strikes and the dispatch of hundreds of U.S. advisers.

In addition, the growing anxiety about the Ebola pandemic in West Africa and its possible spread here have contributed to an apparent decline in public confidence in Obama’s leadership.

These events have emboldened neo-conservatives and other hawks – mostly Republicans – who have long criticised Obama for “leading from behind”, weakness, and “appeasement” in dealing with alleged adversaries, and even “isolationism” – to amplify those charges in advance of the November elections.

They have also encouraged former senior military officers, especially those employed by big military contractors, to call for restoring recent cuts in defence.

While defence spending is currently down about 21.5 percent in real terms from its 2008 high of nearly 800 billion dollars, it still accounts for almost 40 percent of global military spending and four percent of U.S. gross domestic product (GDP), about twice the country average for the rest of the world’s nations.

Polls have suggested for decades that the public is conflicted about Washington’s global role: on the one hand, enduring majorities have long supported the notion that the U.S. should be the world’s leading military power; on the other hand, strong majorities have also strongly rejected the role of “world’s policeman”, preferring instead a co-operative, multilateral approach to foreign-policy issues in which military power and unilateral action should be used only as a “last resort”.

According to Conetta, these views are not mutually contradictory and have been relatively consistent over time. “(T)he public views military superiority as a deterrent and an insurance policy, not a blank check for military activism,” Conetta noted.

Detailed polling conducted over many years by the Pew Research Center, the Chicago Council on Global Affairs, and Gallup, among others, have shown that the U.S. public will reliably rally in support of a forceful response to violent attacks on citizens or perceived U.S. vital interests and, at least theoretically, in cases of mass killings or genocide.

On the other hand, they have shown that the public generally opposes intervention in most third-party inter-state or civil wars. And despite initial – but fast-waning — enthusiasm for “regime change” in Afghanistan and Iraq, the public has come to oppose such efforts or “armed nation-building”, especially if they are conducted unilaterally, according to Conetta.

“Current support for bombing ISIS positions in Iraq and Syria is consistent with (those) limits,” his study noted, adding that that support is almost certain to waver “if the mission grows or fails to show real progress.”

In contrast to the public’s views, however, foreign-policy elites have consistently expressed support for U.S. military dominance, or “primacy,” and greater military activism, according to Conetta. This has created a gap between the public and the national leadership which, in the post-Cold War era, narrowed only in the years immediately following the first Gulf War and the 9/11 terrorist attacks, but which has since grown wider than ever in the past decade, despite the strong support for U.S. attacks on ISIL.

While the most recent polling shows a plurality in favour of continuing to reduce Pentagon spending, according to the study, “this may soon change”, especially in the run-up to the 2016 presidential election, given the ease with which hawkish political actors have historically framed public debate, according to the study.

“A common stratagem is to frame discussion of budget issues in terms of averting a ‘hollow military’. Another is to use Second World War metaphors – references to Hitler, Munich, and isolationism – to frame current security challenges and higher levels of defense spending,” Conetta wrote.

Such themes, he added, “are now fully in play – casting (Syrian President Bashar al-) Assad and (Russian President Vladimir) Putin as Hitler, warning against a replay of “Munich-like appeasement, and tarring non-interventionary sentiment as ‘isolationist’.”

Still, it’s not certain they will prevail given the persistent economic worries of most U.S. voters and if the electorate perceives the foreign-policy elite as overreaching again, as they have in Afghanistan and Iraq.