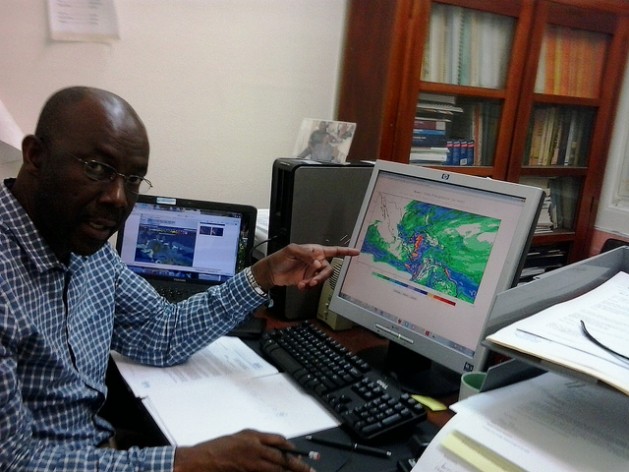 PARAMARIBO, Suriname, Oct 15 2014 (IPS) - Farmers in the Caribbean are being encouraged to make more use of farm apps and other forms of ICT in an effort to increase the knowledge available for making sound, profitable farming decisions.

Peter Thompson of Jamaica’s Rural Agricultural Development Authority (RADA) said Geographic Information Systems (GIS) technology is being increasingly used to track “localised conditions, pests and disease prevalence. The technology will not only add value to us but to the farmers in giving information that they need.”

“The application of these technologies in agriculture pull in young people. If you focus on traditional means, chances are agriculture will die a natural death." -- Peter Thompson

A great deal of attention was given to “scaling up” the integration of technology into day-to-day farming practices at CWA 2014, co-sponsored by the Technical Centre for Agricultural and Rural Cooperation ACP-EU (CTA) and the Caribbean Agricultural Research and Development Institute (CARDI).

The University of the West Indies, St. Augustine, showcased apps that students in the Department of Computing and Information Technology had developed as part of the AgriNeTT project, a collaborative effort between the Department, the Faculty of Food and Agriculture, and farmers’ representatives.

AgriNeTT’s project leader/coordinator, Dr. Margaret Bernard, said “the main focus…is developing intelligent systems within agriculture. There is a lack of data [and] many of the models being built did not have real data from the field.”

The apps are intended to support agriculture, she told IPS. “A big part of the AgriNeTT project is the development of an Open Data repository, particularly to house agriculture data on a national level… The repository will house different data sets, including farm level production data, commodity prices and volumes, farm land spatial data, soils, weather, and pest and diseases tracking data.”

Dr. Bernard said the aim of the Open Data repository was to build a platform that would be accessible throughout the Caribbean. The project seeks to encourage all in the Caribbean farming community to share in uploading data so that “developer teams can use that data creatively and build apps [for agriculture].”

She added that the creation of apps and tools based on the data would help to modernise Caribbean agriculture. “The collection, aggregation, analysis, visualisation and dissemination of data are key to Caribbean competitiveness,” Dr. Bernard said.

Dr. Bernard holds high hopes for a new app, called AgriExpenseTT, which her team developed for farm record-keeping. The app, now available for download at Google Play, allows farmers to track expenses of more than one crop at a time, track purchases of agricultural products they use on their farms, as well as track how much of the products purchased are actually used for each crop.

She said farmers who opted for the subscription service for this app would then have their data stored which would allow researchers “to verify some of the models for cost production, so we know this is what it costs to produce X amount of [any crop].”

Another reason for encouraging the use of ICT in agriculture is the need to make farming a more attractive career option for young people, CTA’s Director Michael Hailu explained. He said an important dimension to family farming, the theme of this year’s CWA, was the significant role that young people should and could play in the development of the region’s agriculture.

Since the region’s farming population is aging, “we at CTA are making a special effort to encourage young people to engage in agriculture—in ways that they can relate to, using new technologies that are far removed from the old image of farming,” he said.

To this end, CTA offered a prize to young app developers in the region who would develop innovative ICT applications to address key Caribbean agricultural challenges and foster agri-enterprise among young people. 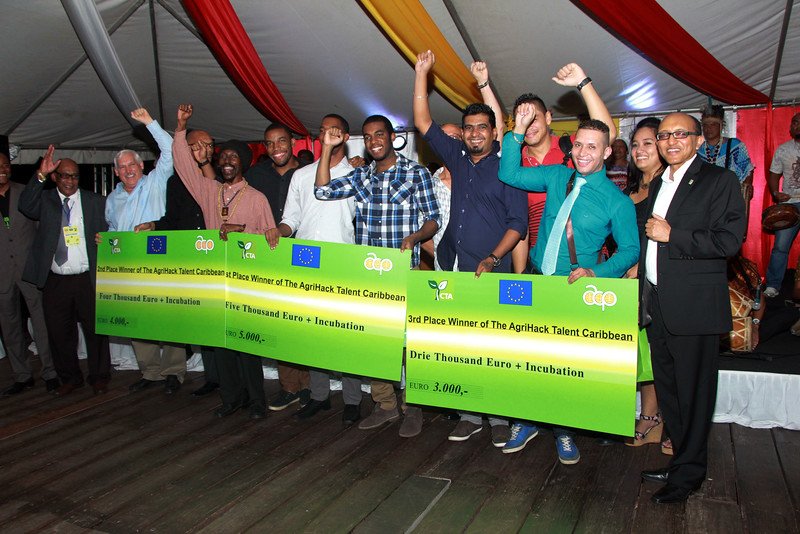 Winners of this year’s AgriHack Talent competition, at the Caribbean Week of Agriculture 2014. The winners designed apps to be used by farmers. Photo Courtesy of CTA

Many of the apps developed for the CWA 2014 AgriHack Talent competition focused on providing farmers with useful information that is not always readily available.

Jason Scott, part of the Jamaican team that won the agricultural hackathon with their app named Node 420, said, “Collecting the information they need can be a real problem for farmers.” He said he and his colleague Orane Edwards “decided to design some hardware that could gather all sorts of data to help them with their cultivation, including planting, sowing and harvesting.”

RADA’s Thompson said, “The application of these technologies in agriculture pull in young people. If you focus on traditional means, chances are agriculture will die a natural death…We have these young guys coming in who are just hungry to do things in terms of technology. We have to help them.”

However, Faumuina Tatunai, a media specialist who works with Women and Business Development, an NGO that supports 600 farmers in Samoa, told IPS that excessive focus on attracting youth to farming through ICT may be short-sighted.

“The reality of farming is that we need young people on the farms as part of the family. To do that we need to attract them in quite holistic ways…and ICT is just part of the solution but it is not the only solution.”

She said her organisation seeks to encourage interest in farming among youth by taking a family-centred approach and encouraging all members of the family to learn about agriculture and grow together as farmers through the use of training and other opportunities.

“Everyone in the family is a farmer, whether they are six or 70 years old…our approach is to build capacity with mother, father, and child,” Tatunai said.