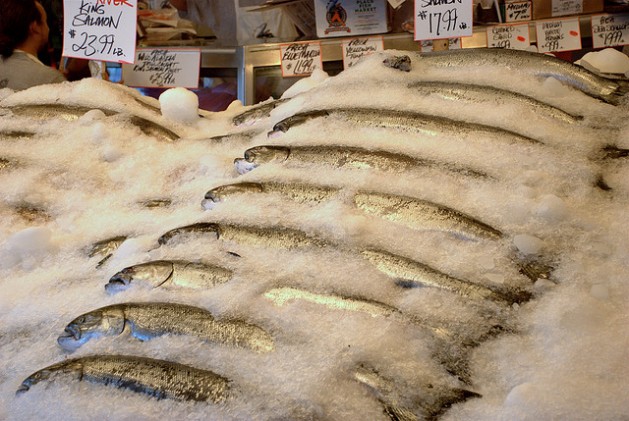 WASHINGTON, Oct 29 2014 (IPS) - Officials in Panama have fined the local facility of a U.S. biotechnology company for a series of permitting and regulatory failures around a pioneering attempt to create genetically modified salmon.

"There are about 35 other genetically modified species in the development pipelines in other companies." -- Dana Perls of Friends of the Earth

Further, companies in the United States and around the globe are said to be actively watching U.S. regulators’ response to AquaBounty’s application as a critical indication of whether to proceed with other GM meat projects.

“AquaBounty is really out front on this – the current case will set an important precedent,” Dana Perls, a food and technology campaigner at Friends of the Earth, a watchdog group, told IPS.

“From what we know, there are about 35 other genetically modified species in the development pipelines in other companies. So depending on what happens in this case, we’ll likely either see a flow of other permits or this will demonstrate that there isn’t room on the market for GM meat or seafood.”

AquaBounty’s application with the U.S. government would involve getting filets of the new GM salmon from the company’s breeding facility in Panama and into the U.S. market. Advocates are now pointing to the Panamanian authorities’ findings of regulations violations as an indication that the U.S. regulatory process is proceeding too quickly in considering the salmon application.

“The impacts GM foods will have on health and the environment have not been sufficiently assessed to approve human consumption of this salmon,” Luisa Arauz Arredondo, an attorney with the Panama Centre for Environmental Advocacy, which filed the administrative complaint against AquaBounty, told IPS.

She notes that while AquaBounty’s facilities in Panama have permission to run experiments on the salmon, the country has not approved anything further.

“The salmon would not be sold to Panamanian consumers,” she says, “since the human consumption of GM salmon has not been approved by Panama or the U.S.”

The Panamanian regulatory decision, which was made public on Tuesday, actually stems from a 2012 investigation of AquaBounty’s facilities and was decided in July of this year. It found that the company had failed to secure necessary permits, particularly around its use of water and pollution of the local environment – potentially important, advocates say, given the possibility of contamination of natural systems.

The authorities noted their view that the company had “repeatedly violated” these regulations, and stated that these problems persisted into 2013. They deemed the transgressions significant enough to levy almost the maximum fine allowable against the company.

AquaBounty Technologies suggests that the concerns outlined by Panama’s government were largely administrative in nature and notes that any problems have all been dealt with already.

“It is important to emphasize that none of the issues in the Resolution questioned the containment, health of the fish, or the environmental safety of the facility,” the company said in a statement sent to IPS.

“When AquaBounty was informed of issues at our Panama facility, we immediately contacted ANAM, the Panamanian agency for the environment. We initiated a program to remedy the deficiencies and the issues were formally resolved in August of 2014.”

The company notes that its Panama facility “continues to operate with no sanctions or restrictions.”

Whether the actions on the part of Panama’s government will impact on the ongoing consideration of AquaBounty’s application by the U.S. Food and Drug Administration (FDA) remains to be seen.

A spokesperson for the FDA likewise pointed out that AquaBounty’s violations were based on a 2012 inspection, but also said the agency would “consider all relevant information as part of the decision-making process.”

The spokesperson noted that the agency is in the process of completing its review of the company’s application, but declined to provide a timeline on what that decision will be made.

For environmentalists, public interest groups and anti-GMO advocates, the Panama findings underscore a potential weakness in the FDA’s regulatory process.

“This decision is also even further proof that FDA is dangerously out of touch with the facts on the ground, advancing AquaBounty’s application based on its promises, not reality,” George Kimbrell, a senior attorney with the Center for Food Safety, a Washington-based advocacy group, said Tuesday.

Friends of the Earth’s Perls says that the FDA’s current regulatory review of the GM salmon application is based solely on the single AquaBounty facility in Panama.

“The FDA is going forward with its review based on the premise that this facility will be in compliance with regulations, yet now we’re seeing it’s not,” she says. “It is increasingly clear that there is inadequate regulation: the FDA is trying to shoehorn this new genetically engineered animal into a completely ill-fitting regulatory process.”

Much of the concern here revolves around the potential for genetically modified hybrids to escape into the wild, potentially outcompeting wild populations or introducing new diseases. Yet the issue also runs up against the scepticism that continues to colour consumer response to genetically modified foods – and the sense that regulators are moving too quickly to approve these products.

When the FDA in 2012 asked the public to weigh in on the AquaBounty salmon application, it received some 1.8 million comments expressing overwhelming opposition. Members of the U.S. Congress have likewise expressed their concern, and legislation has been proposed that would require the labelling of genetically modified fish.

As yet, there is no legal requirement in the United States to label any genetically modified food or ingredient, though the state of Vermont could soon impose such a mandate. According to a media poll conducted last year, some 93 percent of people in the U.S. support the labelling of genetically modified foods, and three-quarters said they would not eat GM fish.

Yet perhaps the most significant indication of public sentiment on this issue has come from the retailers that have pre-emptively stated that they would not sell genetically modified fish and seafood – regardless of whether the FDA approves its sale. According to data compiled by Friends of the Earth, some 60 major U.S. food retailers have already pledged to do so, including several of the country’s largest grocery chains.

“Should GE salmon come to market, we are not considering nor do we have any plans to carry GE salmon,” Safeway, the second-largest grocer in the United States, said in a policy statement released in February. “Safeway’s [policy] calls for all of our fresh and frozen seafood to be responsibly sourced and traceable or be in a time-bound improvement process by the end of 2015.”