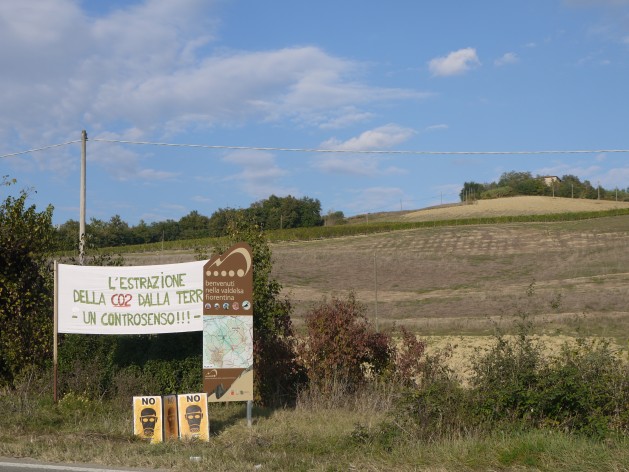 Part of the area planned for extraction of CO2 in Val d’Elsa, Tuscany, Italy with a protest sign reading: EXTRACTION OF CO2 FROM THE GROUND – A NONSENSE!!! Credit: Silvia Giannelli/IPS

LUCCA, Italy, Oct 30 2014 (IPS) - “If  they go ahead and dig those wells, all my work will be destroyed, all my life, everything,” says Franca Tognarelli, looking at the hills and vineyards around her house in Certaldo, Val d’Elsa, in the heart of Tuscany.

Now retired, Franca invested all her savings in restructuring her house in Certaldo, only to find that it sits on top of a deposit of CO2 that a private company – Lifenergy S.r.l. – is eager to extract and sell for industrial purposes, most likely in the production of sparkling beverages.

The irony is that the gas under Franca’s house is the same greenhouse gas held largely responsible for global warming.

While a growing awareness of the potential disastrous consequences of climate change is pushing nations to join efforts in curbing emissions of CO2, including considering highly disputed technologies such as Carbon Capture and Storage (CCS), the prospect of lucrative business is enough for private companies to want to extract more of it from under the ground.

According to a scientific source who wished to remain anonymous, the CO2 obtained from the area in question would offset most of the production of renewable energy in Tuscany, ultimately cancelling its Italian leadership in the production of geothermal energy.

In a preliminary phase, the CO2 project would involve drilling two test wells to a depth of between 400 and 700 metres inside a 45 hectare area that Lifenergy has already purchased. If the testing gives positive results, the company would then proceed to expand a network of wells necessary for extracting the CO2.

“They will simply have to compensate me for the part of ground they’ll be drilling,” explains Franca, “but they will be allowed to enter my property and dig all the holes they want.”

Under Italian law, a land owner’s permission is not required to enter the land for experimental excavation purposes once such experiments have been authorised by the public authorities.

Lifenergy is not the first company to have attempted to put its hands on the CO2 reserves of Val d’Elsa, but it is the first which has managed to obtain the permits to do so, after a last attempt made in the 60s ended up with the explosion of a well.

In May, a group of concerned citizens took the issue to the Tuscany Regional Administrative Court, but the court rejected their objections to the Lifenergy plan. “The law is on our side and we are open to dialogue, but we are determined to carry forward our activities,” Massimo Piazzini, managing director of Lifenergy, told local news website GoNews.

“But we need serious and responsible institutions that are willing to discuss and find solutions to give new opportunities to the territory, while respecting mankind and the environment,” he added.

Members of the Committee for the Safeguard and Defence of Val d’Elsa blame the previous town council for not having taken concrete action against the Lifenergy plan, but the newly elected mayor of Certaldo, Giacomo Cucini, said that “after receiving the company request to start testing, the former mayor simply followed the normal procedure without expressing a political opinion on the matter.”

Nevertheless, he added, “the current town council openly opposes the extraction project on our territory, because this is a territory that lives on agriculture and tourism and we want it to remain that way.”

Apart from the ‘visual impact’ that an extraction plant would have on the characteristic landscape of Certaldo, the risks of water and air pollution are a major concern among members of the Committee for the Safeguard and Defence of Val d’Elsa.

“There are plenty of farmers here who have been working all their lives, sweating blood to keep their business going, especially with the crisis,” says Caterina Concialdi, one of the committee members. “Now they have to face a private company that might leave them empty-handed, because the risks are real and nobody is telling us who’s going to pay for the damages if something happens.”

Ubaldo Malavolta is one of those farmers. His land is part of the area for which Lifenergy has requested a drilling permit after the testing phase.

“If they get the concession, they will be able to dig holes in my garden, and it’s not like a water well,” he said, adding that the company itself has declared that there will be emissions of hydrogen sulphide.”

“It’s called H2S and it’s not just about the smell, it’s poisoning and it leads to air pollution” insists Tiziano Traini, another committee member. “They are obviously supposed to keep the level of these emissions under the threshold established by law. But this will nevertheless mean a serious worsening of environmental conditions for the people who live here.”

Despite the widespread opposition shared by local citizens and the town council, the decision on the concession lies in different hands: “We have been asked to express a technical opinion,” Cucini explains, “but in no way can the municipality allow or deny the research phase of the project.”

The Tuscany Region, the authority that is responsible for the concession, is currently in the process of evaluating the environmental impact and is expected to take a decision by the beginning of December.

“The research permit is still on, but the Regional Council has stated that there will be no more concessions for underground extractions in the area, and this is quite reassuring for us,” the mayor told IPS.

Enrico Rossi, president of the Tuscany Region, explained in a public statement that the Regional Council’s stance is an act of responsibility towards the environment.

But the citizens seem to have lost their faith in the institutions and look with concern at their future: “I’m too old to go anywhere,” says Franca, “and this house will be of no value inside a mining area.”

* Anja Krieger and Elena Roda contributed to this report.