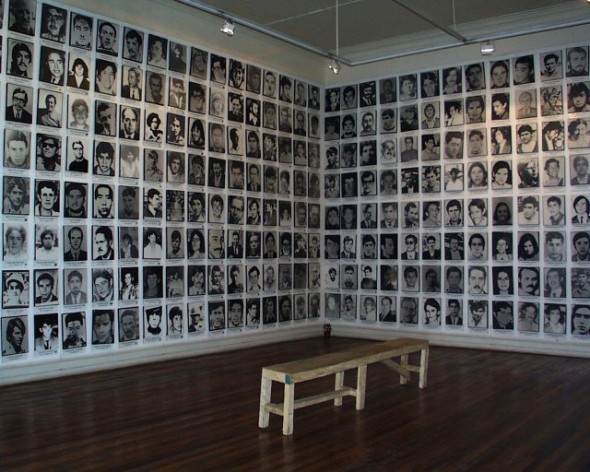 Ana María Luna Barrios searches murals of photos of people “disappeared” after the 1973 coup d’etat that ushered in the dictatorship of Augusto Pinochet in Chile, looking for a face that might be her mother, from whom she was apparently taken after being born in captivity. Credit: Marjorie Apel/Creative Commons

SANTIAGO, Dec 31 2014 (IPS) - The suspicion that babies of people detained and disappeared during Chile’s 1973-1990 dictatorship were stolen is growing stronger in Chile, a country that up to now has not paid much attention to the phenomenon.

“There has always been a suspicion that something similar to what happened in Argentina also occurred in Chile, and that many women who were pregnant when they were detained actually gave birth in detention centres,” a 70-year-old woman who asked to be identified simply as Carmen told IPS.

“No one dug into that issue much back then, because we were afraid, and nobody would have listened to us,” she added.

During the Sep. 11, 1973 coup, Carmen, a high school teacher who actively supported the left-wing Popular Unity government of socialist President Salvador Allende (1970-1973), was in a small town in southern Chile doing political work with a group of other young activists.

A few hours after Allende was overthrown by the coup led by General Augusto Pinochet, Carmen saw one of her fellow activists killed right next to her as they were protesting against army troops advancing on the small town. “You never get over that pain,” she said.

Despite the violence and insecurity, she made it back to Santiago and from there managed to flee into exile.

“In this country things have moved forward slowly, very slowly at times, but with the certainty that there will be no backsliding. And this issue is not going to disappear, in case someone was hoping for that." -- Lorena Fríes

“I wasn’t detained or tortured, but many of my fellow activists were. A number of them gave birth to children, and no one knows if they are alive, while others fell pregnant as a result of being raped during torture,” she said.

According to the official investigation, 40,000 people were tortured during the 17-year military dictatorship, and 3,095 of them were killed, 1,000 of whom are still disappeared.

It has been confirmed that at least 10 women were pregnant when they were detained and disappeared. They were between the ages of 26 and 29, and were three to eight months pregnant.

In August, the moving images of Argentine activist Estela de Carlotto with Guido, her grandson, who was finally tracked down, made headlines around the world.

The discovery of the grandson of the president of the Grandmothers of Plaza de Mayo, who was stolen during Argentina’s 1976-1983 dictatorship, moved many people in Chile, who see progress being made across the border in healing the wounds left by human rights violations in a particularly sensitive area – the question of babies born to political prisoners and stolen.

Lorena Fríes, director of the National Institute of Human Rights, said there are well-founded suspicions that some children of political prisoners were taken by agents of the dictatorship, “but not in the same magnitude as in Argentina, where it formed part of the repressive policies.”

“I do not have the conviction that it was widespread, although there may have been cases,” she told IPS.

Human rights lawyer Alberto Espinoza has not yet handled any cases involving the theft of babies born in captivity.

“I know about pregnant women who were tortured and as a result may have lost their pregnancies, but I don’t have any information about those babies surviving,” he said.

But, Espinoza added, “I don’t rule out the possibility that it happened. Such extraordinarily inhumane and exceptionally shocking things happened during the military dictatorship that it can’t be ruled out that maybe some children survived and no one knows what happened to them.”

But for the first time, the suspicion that children were stolen by the dictatorship has been acknowledged to be well-substantiated.

That is especially true after the programme Informe Especial (Special Report) broadcast by the public station Televisión Nacional de Chile, with previously unheard accounts from women who were raped as part of the torture they suffered during the dictatorship, and who were told that their babies had died, in murky circumstances.

The report titled “the invisible children of the dictatorship” ended with an unprecedented appeal: “If you know or suspect that you were adopted and are between the ages of 35 and 40, contact the Interior Ministry’s Human Rights Programme.”

The information provided in the Special Report programme and the appeal put the spotlight on the official suspicion that children were stolen, but also on the children who were born as a result of the sexual violence that female political prisoners suffered in clandestine detention centres.

The programme, which aired Dec. 15, triggered a flurry of reactions on the social networks.

And the next day, Justice Minister José Antonio Gómez met with a group of former female political prisoners who were victims of sexual violence and promised to move ahead on a draft law that classifies torture and related sexual violence as specific crimes.

“It is certain that many people, principally women, have not given all of their testimony with respect to the politically-related sexual violence or sexual torture to which they were subjected during the dictatorship,” Fríes said.

“It has also been shown that it takes women a much longer time to report these kinds of situations. That means there is a pending issue here,” she said.

On the other hand, she added, “many years have gone by, and time is the main enemy of the possibility of seeing justice done.”

There is at least one concrete case of a baby girl who was born to a political prisoner. The name of the torture victim’s daughter, who is now an adult, was kept anonymous. Another young woman, Isabel Plaza, is the daughter of Rosa Lizana, who was kidnapped on the street when she was seven months pregnant, in 1975, and was held for a month before she was sent into exile.

Another special case is that of Ana María Luna Barrios, who since finding out she was adopted has been searching for her mother among the faces of the disappeared. She was abandoned in 1976 in the Military Hospital, where a nurse took her home and later adopted her.

She has taken her case to court, without results. But new investigations have found that a DINA – the dictatorship’s secret police – lieutenant Hernán Valle Zapata (now dead) registered her before she was abandoned, listing the mother as “failing to appear”, as he had done in the case of another baby girl.

Nieves Ayres, who now lives in New York, was held in Londres 38 and Tejas Verdes, two torture centres. She was systematically gang-raped, and in her account she describes that rats were inserted in her vagina, and she was subjected to sexual abuse by dogs.

She became pregnant, but suffered a miscarriage.

Espinoza noted that these cases are considered crimes against humanity, which means there is no statute of limitations and they can still be investigated, even though 24 years have passed since Chile’s return to democracy.

Fríes, for her part, said “these issues will probably be with us for a long time to come, which is why it is important to understand that the new times open up new doors with respect to what happened during the dictatorship and the need to bring these memories to light so that this never again happens in Chile.

“In this country things have moved forward slowly, very slowly at times, but with the certainty that there will be no backsliding. And this issue is not going to disappear, in case someone was hoping for that,” she concluded.