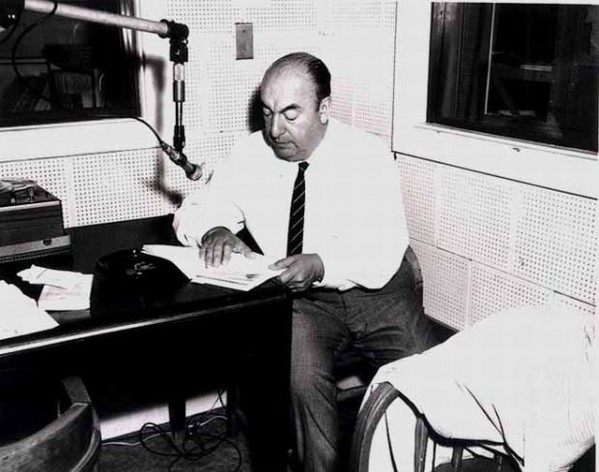 Pablo Neruda taping his poems in the U.S. Library of Congress in 1966. Credit: Public domain

“A search for the historical truth is being driven by penal proceedings,” Luis Emilio Rojas, director of the master’s programme in penal law at the Alberto Hurtado University, told IPS.

“While the goal is to determine criminal responsibility, the reopening of legal proceedings indirectly helps to establish the occurrence of events that are milestones in the history of Chile,” he added.

Human rights lawyer Eduardo Contreras was the first to file, in conjunction with the Association of Relatives of Politically Executed Persons (AFEP), a lawsuit to establish the cause of the death of socialist president Salvador Allende during the military’s bombing of the La Moneda presidential palace in the Sep. 11, 1973 coup.

Today Contreras is demanding clarification of the death of poet Pablo Neruda, which occurred on Sep. 23, 1973 – just 12 days after his close friend Allende was overthrown.

Neruda’s remains were exhumed in April from the final resting place he shared with his last wife, singer and writer Matilde Urrutia (1912-1985), at their home in Isla Negra, 110 km west of Santiago.

On Friday Nov. 8, seven months after the exhumation, the Forensic Medical Service reported that international forensic experts ruled out the presence of toxic chemical substances that could have caused Neruda’s death.

Contreras noted, however, that the forensic exams by Chilean and foreign experts were just the first part of the investigation. He said that on Monday Nov. 11 “we will request that other laboratories take part in the investigation, in search of toxicological agents that are biological, not chemical, in nature, such as sarin gas, mustard gas, or bacteria.”

Judge Mario Carroza, who investigated whether third parties were involved in the death of the 1971 Nobel laureate, said it could not yet be established judicially whether Neruda was killed or died of cancer 40 years ago.

If the results of the forensic experts do not satisfy all of the concerned parties, “we will have to look for other alternatives,” he added.

Neruda, who was 69 years old and was being treated for prostate cancer when he died, had been a member of the Communist Party of Chile for 28 years.

At the time of his death, he was getting ready to go into exile in Mexico, where he would have been a prominent voice of opposition against the dictatorship of General Augusto Pinochet.

In the days before his death, Neruda was demoralised when his three houses were raided by agents of the dictatorship.

Although Neruda was being treated for prostate cancer, Araya alleges that he was killed by an injection to his stomach given by someone posing as a doctor in the private Santa María clinic on the supposed orders of the dictatorship.

Nine years later, former president Eduardo Frei Montalva (1964-1970) was killed in the same clinic, with a biological toxin, according to the legal investigation of his death.

But the perpetrators of abuses during the dictatorship still enjoy impunity, even though the regime’s human rights violations are now talked about openly, Lira said.

“There is impunity when many cases were closed by the military prosecutors office, which is both judge and plaintiff, and when more than 178 agents of the state who murdered and ‘disappeared’ people have not spent a single day in prison because of the application of ‘media prescripción’ [by which a sentence may be reduced when more than half the statute of limitation has elapsed] or because they were granted a suspended sentence,” she said.

Singer-songwriter and activist Víctor Jara was killed Sep. 15, 1973 while he was being held in Chile’s national stadium along with thousands of other opponents of the coup. His body showed signs of torture and was riddled with bullet wounds.

But it was not until 2008 that an investigation was launched into his death. The man accused of ordering his torture and firing the fatal shot, army Lieutenant Pedro Barrientos, is still at large, living a quiet life in the United States.

Contreras said it is a “moral duty” to investigate these deaths in the face of contradictory elements.

“Just as the law requires an inquiry into the death of a homeless man who dies of cold, which seems fair to me, why not investigate the death of a president? To me that is absolutely despicable,” he said, referring to Allende’s death.

For many years, doubts surrounded the death of Allende, who entrenched himself in the presidential palace along with a number of armed civilian supporters to resist the coup and the bombing of La Moneda. As a result of the lawsuit brought by Contreras, it was finally confirmed that he committed suicide.

In Neruda’s case there are also contradictions, which means “you are ethically and morally obligated to investigate, and if you don’t, you are a scoundrel,” Contreras said.

During the regime, 3,065 people were killed and/or forcibly disappeared, and 37,000 were held as political prisoners.

Some 1,300 human rights cases are making their way through the courts in Chile, involving crimes like extrajudicial executions, forced disappearances, torture, or illicit association committed between 1973 and 1990.

These cases and others that have been resolved cover 75 percent of the victims of killings or forced disappearance recognised by the state, but only a small portion of the cases of political prisoners who survived torture.