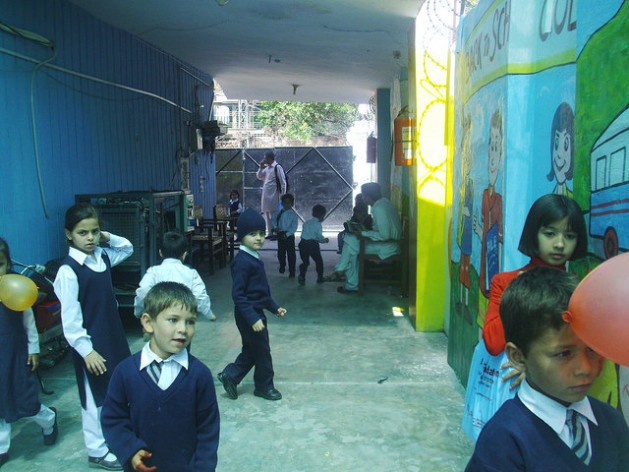 Thousands of children attend free schools in Afghan refugee camps, but only up to sixth grade - after that, the vast majority of students quit their studies because their families can't afford to pay for private school. Credit: Ashfaq Yusufzai/IPS

PESHAWAR, Pakistan, Dec 22 2014 (IPS) - “Our children quitting school is the greatest pain we have suffered during our troublesome lives here,” says Multan Shah, a vegetable-seller in a shantytown of Peshawar, the capital of Khyber Pakhtunkhwa, one of Pakistan’s four provinces.

Once a resident of the capital Kabul, war drove Shah to relocate to Khyber Pakhtunkhwa province in 1985, where he settled in the Jallozai refugee camp. He lived hand-to-mouth but was able to send his two sons and daughter to a free school run by a foreign-funded NGO.

"My daughter weeps when her brother goes to school every morning." -- Noorullah Ahmedzai

Thousands of children have benefitted from such schools in some Afghan refugee camps, but only up to sixth grade – after that, the vast majority of students quit their studies because their families can’t afford to pay for private school.

“My two sons graduated from sixth grade this March but we couldn’t enroll them in the next grade because we don’t have money to pay the fee,” Shah says.

Gaffer Ahmed, principal of the Mirwais Public School in Peshawar, says they used to get assistance from local NGOs and individuals for free education of students up to tenth grade, but that ended in 2010.

“Many students aren’t able to continue their education as they can’t bear the cost now,” he confirms.

Ahmed says his school had provided free education to a few gifted students, but that most Afghan refugees in Pakistan faced harsh economic conditions and a majority of parents couldn’t pay the expenses. He himself is unable to afford it.

“Private schools charge about 10 dollars per month. I earn 60, which is too little to pay for my children’s tuition,” he laments.

Mastoora Stanikzai, director of the Abu Ali Senna Afghan Teachers’ Training Institute in Peshawar, is worried about the growing number of dropouts.

“Only 7,000 students reached grade 12, out of 230,000 students admitted every year to Afghan schools in Pakistan,” she says, fearing what the future holds for these children.

Stanikzai says some schools also offer two-year diploma courses in midwifery and business administration to refugee students in collaboration with the Afghanistan government.

Her institute has trained 1,350 teachers, half of them women. About 125 teach at the Afghan schools.

Pakistan has 1.9 million legally registered Afghan refugees and an equal number who are unregistered, according to U.N. figures. The free schools require refugees to show a Proof of Registration card to enroll their children.

“Non-availability of funding has affected the female students the most,” says Stanikzai, who also heads the Refugee Women’s Organisation. “People wanting to admit their daughters to school are finding it hard in view of the cost.

“As a result, we see young girls and boys wandering the streets, collecting garbage,” she says.

Farkhanda Maiwandi, 11, tells IPS that she used to go to a school in the Khazana refugee camp in Peshawar, where she passed grade six.

“After that I sat home because my father, a daily labourer, cannot spare the money to enroll me at a private school. It is painful to be out of school but we don’t have a choice,” she says.

Maiwandi says that she knows at least 10 girls who quit school. “Only a few girls managed to get admitted to grade seven because their parents could afford it,” she says.

Noorullah Ahmedzai, an Afghan refugee in the Haripure district of Khyber Pakhtunkhwa, is extremely upset over the lack of education for his two children.

“My one son and one daughter studied at a refugees’ school in a camp. Last year, they completed grade six and were told that they wouldn’t be given further education because they have to get admitted to a private school,” he says.

“We have enrolled my son at school but my daughter is staying home because I don’t have money to pay the fees for both,” he says.

“My daughter weeps when her brother goes to school every morning. She now takes lessons at home from her brother. I have a dream to see my children educated,” he says.