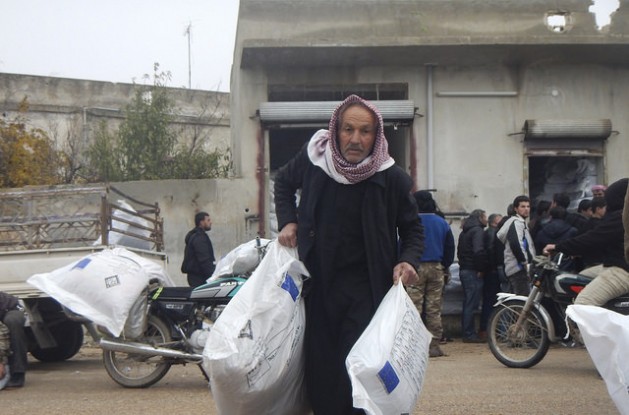 KUWAIT CITY, Mar 31 2015 (IPS) - When United Nations Secretary-General Ban Ki-moon stood before 78 potential donors at the Bayan Palace in Kuwait Tuesday, his appeal for funds had an ominous ring to it: the Syrian people, he remarked, “are victims of the worst humanitarian crisis of our time.”

Four out of five Syrians live in poverty, misery and deprivation, he said.

And the devastated country, now in its fifth turbulent year of a seemingly never-ending civil war, has lost nearly four decades of human development.

Nearly half the world’s top donors didn’t give their fair share of aid to the Syrian humanitarian effort in 2014 based on the size of their economies. --Oxfam
A relentless, ruthless war is destroying Syria, the secretary-general continued. “The violence has left so many Syrians without homes, without schools, without hospitals, and without hope,” Ban added.

Still, his appeal for a hefty 8.4 billion dollars in humanitarian aid fell short of its target – despite great-hearted efforts by three major donors: the European Commission (EC) and its member states (with a contribution of nearly one billion dollars), the United States (507 million dollars) and Kuwait (500 million dollars).

At the end of the day, the third international pledging conference for humanitarian aid to Syria was able to raise only about 3.8 billion dollars against an anticipated 8.4 billion dollars.

Without expressing his disappointment, Ban said the kind of commitments made at the conference will make a profound difference to the four million Syrians who have sought refuge in neighbouring countries and the five million still trapped without food or medical help in hard-to-reach besieged areas in the war ravaged country.

“This is yet another example of the vital, life-saving leadership that Kuwait has [shown] to help those in dire need around the world,” he added, describing the Emir as one of the world’s “humanitarian leaders.”

In his address, the Emir implicitly criticised the five permanent members of the Security Council – the United States, Britain, France, China and Russia – for their collective failure to bring about a political settlement in Syria.

“The international community, and in particular the Security Council, has failed to find a solution that would put an end to this conflict, and spare the blood of our brethren, and maintain the entity of a country, which [has] been injured by the talons of discord and torn apart by the fangs of terrorism,” he added.

After announcing his pledge, EU Commissioner for Humanitarian Aid and Crisis Management Christos Stylianides said the situation in Syria is worsening every day and it is becoming increasingly difficult for humanitarian organisations to reach those in need.

Since the start of the conflict in Syria, more than 11.5 million people have been forced to flee their homes, including 3.9 million who fled to neighbouring countries, and more than 12 million people are in need of urgent humanitarian assistance inside Syria alone – an increase of 30 percent compared to one year ago, he added.

The countries where Syrians have sought refuge include Lebanon, Jordan, Iraq, Turkey and Egypt.

Andy Baker, Oxfam’s regional programme manager based in Jordan, told IPS the whole exercise “is not a game of numbers” – it involves people’s lives.

He said those caught up in the conflict have to make difficult choices: either take a leaking boat to Europe, ask the children to be breadwinners, or arrange early marriages for their daughters.

“The ultimate choice for them is to take that leaking boat,” he said.

In a “full fair share analysis for funding,” Oxfam has calculated that nearly half the world’s top donors didn’t give their fair share of aid in 2014, based on the size of their economies, including Russia (seven percent), Australia (28 percent), and Japan (29 percent).