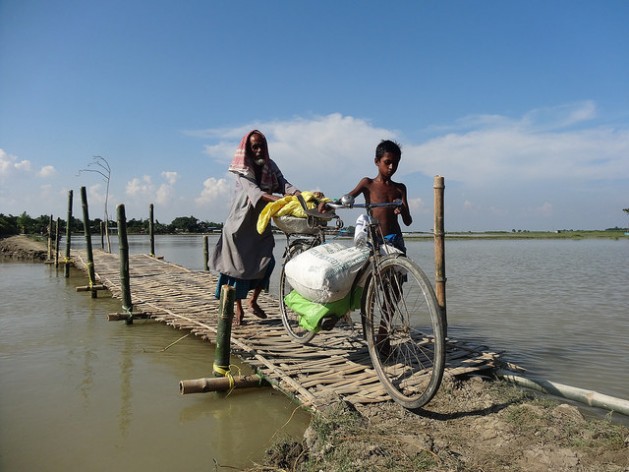 Devastating floods in the northeastern Indian state of Assam in 2014 prompted the government to erect bamboo bridges. This man and child travel from one village to another on a boat, and travel by foot over the bridges. Credit: Priyanka Borpujari/IPS

TAIPEI, Apr 8 2015 (IPS) - University lecture halls in North America are no strangers to the ”cli-fi” genre of climate-themed novels and movies, but now India is getting into the act as well, thanks to the pioneering work of Professor T. Ravichandran of the Indian Institute of Technology Kanpur (IITK) in Uttar Pradesh.

Dr. Ravichandran’s course, titled “Cli-fi and Cli-flicks,” is set to begin in late July and consists of 15 modules covering such topics as eco-fiction, eco-fabulism, and representations of climate change issues in feature films and documentaries.

"How long will I continue to teach Shakespeare and Shelley and make them aesthetically love the beauty of daffodils or skylarks when in reality they would soon become endangered if climate change goes unchecked?" -- Professor T. Ravichandran

Aimed at undergraduate students at IITK, the course will be the first of its kind in all of India, Dr. Ravichandran told me in a recent email.

“In India, climate change awareness is not as acutely felt as in the U.S. or the U.K,” he said. ”My recent research on ‘Literature, Technology and Environment: Global and Pedagogical Perspectives,’ sponsored by the Fulbright-Nehru Professional and Academic fellowship from USIEF, India, and hosted at Duke University in North Carolina, was a turning point in my career.”

Dr. Ravichandran said he experienced a paradigm shift in his thinking about the way in which he connects to the natural environment during his fellowship in North Carolina.

When I asked him what he meant, he replied: “It made me to think seriously of my role as a teacher of literature to engineering students. How long will I continue to teach Shakespeare and Shelley and make them aesthetically love the beauty of daffodils or skylarks when in reality they would soon become endangered if climate change goes unchecked?”

To answer his own question, Professor Ravichandran added: “In order to make myself relevant to my existence on this Earth, I thought at least I should cause awareness on climate change in the minds of my students. So that’s how I started working on the course. In India, I hope to make this course a successful and effective one.”

Since the predominating global concern today is climate change, which obliterates geopolitical boundaries and connects humans in search of common solutions, Dr. Ravichandran is appropriating an inter-disciplinary approach for his course, he told me.

“Climate fiction (‘cli-fi’) and climate films (‘cli-flicks’) offer an inter-disciplinary study of a looming phenomenon that the humans in the Anthropocene age witness helplessly as if trapped on a sinking ship,” he said.

“The real question to be addressed is not, as posed by climate change sceptics, whether this catastrophe is so alarming that humans need to act on it immediately, but how long can humankind afford to remain impervious to something that is so glaring?” he added.

Dr. Ravichandran said that he hopes that having his students focus on novels and films in the ‘cli-fi’ genre will foster a change in mind-set that can open them up to thinking about the sustainable use of scarce resources and ensuring the symbiotic sustenance of the human and the nonhuman on Earth.

Students in the pioneering IITK course will be reading such novels as “Year of the Flood,” “A Friend of the Earth,” and “Flight Behavior.”

In additon, movies such as “Interstellar,” “Snowpiercer” and “The Day after Tomorrow” will be screened and discussed, Dr. Ravichandran said.

As a reporter from North America who has been closely following the rise of the cli-fi genre in the West, I am glad to see IITK in India offering a course like this to its engineering students. Call it a meme, a motif, a cultural prism, a buzzword, a PR tool, or a marketing term, ”cli-fi” is here to stay and India has just joined the club.

In fact, with this course, the first of its kind in India, the professor and his students will be making history, and I hope the media in Uttar Pradesh and beyond will pick up this story as a news story in English and Hindi.

Professor Ravichandran’s novel course could very well become a role model for other academics in India to follow.