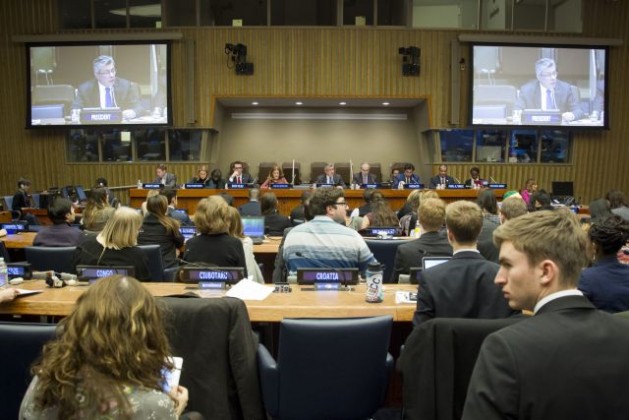 A wide view of the conference room as Vladimir Drobnjak (shown on screens), Permanent Representative of Croatia to the UN and Vice-President of the Economic and Social Council (ECOSOC), addresses the 2015 ECOSOC Youth Forum on the theme, “Youth Engagement in the Transition from the Millennium Development Goals to Sustainable Development Goals: What will it take?” Credit: UN Photo/Loey Felipe

UNITED NATIONS, Apr 29 2015 (IPS) - The NGO Branch of the Department of Economic and Social Affairs at the United Nations is calling on non-governmental organisations to apply for Economic and Social Council (ECOSOC) consultative status in order to be considered by the 2016 NGO Committee.

ECOSOC consultative status relates to ECOSOC resolution 1996/31 – based on article 71 of the Charter of the United Nations, which regulates the relationship between the U.N. and NGOs.

Resolution 1996/31 sets the rules NGOs should abide to – rights and obligations – in order to participate in international conferences convened by the U.N., and it develops strategies to improve the work on the Committee on NGOs and the NGOs Section of the Secretariat.

Consultative status is granted by ECOSOC upon recommendation of the ECOSOC Committee on NGOs – made up of 19 Member States.

According to NGO Branch, any international, regional, sub-regional and national non-governmental organisation can be eligible for ECOSOC consultative status, as long as it follows the subsequent criteria:

“An NGO must have been in existence (officially registered with the appropriate government authorities as an NGO/non-profit) for at least two years, must have an established headquarters, a democratically adopted constitution, authority to speak for its members, a representative structure, appropriate mechanisms of accountability and democratic and transparent decision-making processes. The basic resources of the organization must be derived mainly from contributions of the national affiliates or other components or from individual members.”

On the NGO Branch website, it says that NGOs which are granted consultative status by ECOSOC are able to attend official meetings, submit written statements prior to sessions, make oral statements, meet official government delegations and other NGOs representatives.

NGOs with consultative status can also benefit from organising and attending parallel events aside from main sessions, and participating in debates and interactive dialogues, such as panel discussions and informal meetings.