Kirsty Haigh, Eric Lai and Ellen Young are students at the University of Edinburgh who are involved in People & Planet Edinburgh, a student campaign group urging the university to stop investing in fossil fuel companies. 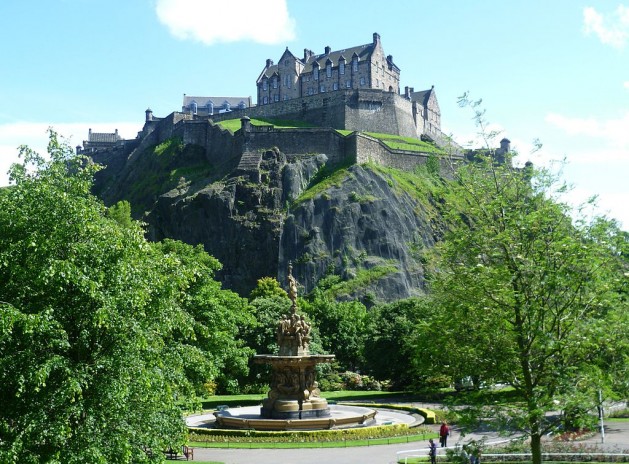 Edinburgh Castle, symbol of the Scottish capital, whose university has just decided not to disinvest in fossil fuels. Photo credit: Kim Traynor/CC BY-SA 3.0 via Wikimedia Commons

EDINBURGH, May 17 2015 (IPS) - The University of Edinburgh has taken the decision to not divest from fossil fuels, bowing to the short-term economic interests of departments funded by the fossil fuel industry, with little to no acknowledgement of the long-term repercussions of these investments.

The decision, which was announced on May 12, exemplifies the influence that vested interests have gained over academic institutions in the United Kingdom.

“Our university has decided to take a reactionary approach to climate change, failing to make any statement of commitment to the staff and students who have been demanding divestment from fossil fuel companies for the past three years”

Collectively, U.K. universities invest over eight billion dollars in fossil fuels, more than 3,000 dollars for every student. The University of Edinburgh has the country’s third largest university endowment, after Oxford and Cambridge, totalling 457 million dollars, of which approximately 14 million is invested in fossil fuel companies, including Total, Shell and BHP Billiton.

Our university has decided to take a reactionary approach to climate change, failing to make any statement of commitment to the staff and students who have been demanding divestment from fossil fuel companies for the past three years.

Announcing it decision, the university said: ”The university will withdraw from investment in these [fossil fuel consuming and extracting] companies if: realistic alternative sources of energy are available and the companies involved are not investing in technologies that help address the effects of carbon emissions and climate change.”

However, given the fossil fuel industry’s continued destruction of the planet, the university’s approach leaves far too much to the imagination and indeed allows for the potential to not divest from harmful industries at all.

We are going to find our existence completely altered – and in a way that we do not want – if   we do not stop extracting and burning fossil fuels, and we know the big fossil fuel companies have no intention of stopping.

Climate change not only poses a massive economic threat but also presents the world’s biggest global health hazard – and its effects are hitting the poorest parts of the world hardest. The University of Edinburgh is fundamentally failing to acknowledge the part it is playing in funding climate chaos.

Our university claims to be a “world leader in addressing global challenges including … climate change” but if the university had any desire to take the moral lead, it would have divested. Divestment would have seen Edinburgh join a global movement of universities and numerous other forward-thinking organisations in divorcing itself from the tightening grip of the fossil fuel industry.

Freedom of Information (FOI) requests have revealed, for example, that the university’s Geosciences Department has received funding from a range of fossil fuel companies over the past 10 years, including BP, Shell and ConocoPhillips, as well as grants and gifts of money from Total and Cairn Energy.

Sixty-five students in the university’s School of Engineering have already signed an open letter to the Head of the School, Prof Hugh McCann, angered by his public opposition to fossil fuel divestment.

Their letter states: “The School of Engineering has and will continue to have a pivotal role in the university’s future. It is after all engineers who will be on the frontlines of the transition to a low carbon society.

“By basing its argument against divestment on engineering students’ chances of employment in one dead-end industry, the school appears to be failing to prepare its students for careers in the rapidly changing energy markets of the 21st century, whilst neglecting the faculty’s broader responsibility to the student body as a whole. As a consequence, they gamble employment against our common future.”

Divesting is a way of taking on and dismantling the big fossil fuel companies and the power they hold over our society and governments. We rightly condemn companies that do not pay their taxes or who exploit their workers, and so we must do this to the companies who are threatening our very existence.

Divestment is also about creating more democratic institutions where those who are part of universities can have a say in how their money is spent and invested. The university’s announcement has shown that we still have a long way to go in creating transparent, democratic and ethical institutions. It brings into question the validity of the university’s decision-making process.

For the past three years, students, staff and alumni have supported full divestment – yet the University of Edinburgh has ignored their calls. The consultation run by the university found staff, students and the public in favour of ethical investment. A year later we still have zero commitment to change.

A process which began with promise has been allowed to descend into a complete breakdown in communication between students and the university. Serious questions need to be asked about why the decision was taken in favour of the views from the university’s Department of Geosciences, which freely admits its vested interested in maintaining the status quo for financial reasons.

The University of Edinburgh needs to invest in alternatives to dirty and unhealthy energy sources. These alternatives will create new jobs, so that when the fossil fuel industry ceases to exist there is something to replace it and our students are trained to work in it.