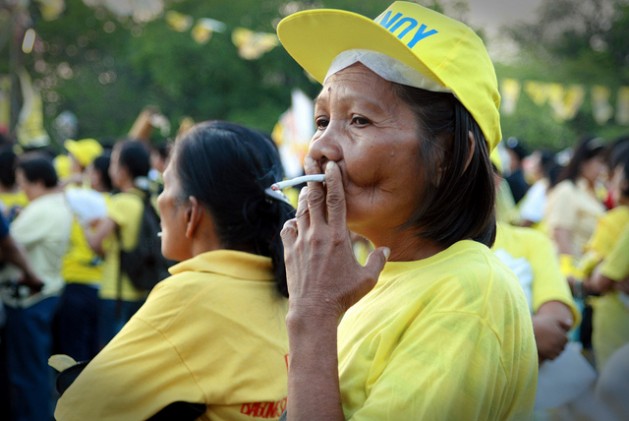 A woman smokes a cigarette branded ‘Fortune’ at a campaign rally for Philippine President Benigno Aquino III, a smoker who has said he has no intention of quitting the habit. The Philippines has the second highest number of smokers in South-east Asia. Credit: Kara Santos/IPS

NEW YORK, May 26 2015 (IPS) - Governments are in the midst of tough talks in New York over the text of the Addis Ababa Accord, which is scheduled to be adopted at the end of the Third Conference on Financing for Development (FfD) , to be held in Ethiopia in July.

However at last report, negotiators continued to downplay a powerful mechanism that governments could use to help achieve and finance the Sustainable Development Goals (SDGs) that will replace the Millennium Development Goals (MDGs) in September: tobacco taxes.

Tobacco use killed 100 million people in the 20th century and, if trends do not change, it will kill one billion people this century.

According to a recent estimate, increasing specific excise taxes on tobacco worldwide, in order to double prices, would raise about 100 billion dollars per year in revenues, in addition to the approximately 300 billion that the World Health Organization (WHO) estimates governments already collect on tobacco.

Tobacco use is the world’s leading preventable cause of death, and the one risk factor common to four major non-communicable diseases (NCDs): cancers, cardiovascular and lung disease, and diabetes.

Tobacco use killed 100 million people in the 20th century and, if trends do not change, it will kill one billion people this century. The proposed SDGs recognise the devastating impact of NCDs and the tobacco use risk factor, and set targets for reducing the deadly impacts of both.

Fear of trampling on governments’ right to decide on taxation is reportedly at the heart of the negotiators’ reluctance to recommend taxation in general as a way to generate funding for sustainable development.

Yet, 180 of the world’s governments have already agreed that tobacco taxation is an important tool to both generate revenue and save lives. Meeting as the Parties to the WHO Framework Convention on Tobacco Control (FCTC), these governments have even agreed on guidelines that set out how to tax tobacco as effectively as possible.

Notably, these guidelines, to the FCTC’s Article 6, represent the first time that governments have agreed on what makes – and what doesn’t make – good tobacco tax policy.

Raising tobacco taxes, and subsequently tobacco prices, is good for health because it reduces the amount of tobacco consumed in three ways:

As a result, tobacco sales decline; however the revenue generated by the higher taxes on the remaining products sold more than makes up for lower sales. That is why increasing tobacco taxes is a win-win for governments: good for health and good for the bottom line.

Most of the revenue would initially be generated in rich countries, as taxes and prices there are much higher to begin with, but developing countries could still raise substantial revenue.

For example, the Philippines hiked specific excise taxes in 2013, raising the average price per cigarette pack by 48 percent. Sales declined and the number of smokers dropped from 28.3 percent of adults in 2009 to 25.4 percent in 2013, while government revenue from tobacco taxes more than doubled from 702 million dollars in 2012 to 1.5 billion in 2013 .

To be effective, tobacco tax increases must be accompanied by other measures, as FCTC Article 6 guidelines point out. Governments should also:

• Implement the simplest, most efficient tax systems;
• Make regular adjustments so that tobacco products become less affordable over time;
• Tax all tobacco products consistently to avoid substitution;
• Phase out tax-free and duty-free products; and,
• Set long-term policies, which could include a tax target.

Parties to the FCTC are not alone in recognising the potential of tobacco taxation. In their recent paper on financing for sustainable development, Jeffrey Sachs and Guido Schmidt-Traub praise tobacco taxes:

“Consumption taxes on tobacco products have been shown to have a very positive impact on reducing tobacco use and improving health. Higher tobacco taxes are particularly effective at reducing consumption by vulnerable populations, particularly youth. In many countries, tobacco taxation is also an important source of government revenue and is dedicated to tobacco control activities, hospital services and other health prevention or promotion services.”

The authors also refer to a 2011 report that Bill Gates presented to a meeting of G20 leaders.

In the executive summary Gates wrote: “Among the revenue proposals I have examined, tobacco taxes are especially attractive because they encourage smokers to quit and discourage people from starting to smoke, as well as generate significant revenues. It’s a win-win for global health.”

Gates continued: “Tobacco taxes are already ubiquitous. Ninety percent of countries have some form of them. And they work. In Thailand, as cigarette taxes rose from 1994 to 2007, revenues doubled even though the number of smokers went down significantly.”

The Sustainable Development Goals provide the roadmap for creating a healthier, more equitable and prosperous world, and as such are extremely ambitious. Considerable resources will be needed for these goals to be realised in the next 15 years.

Already endorsed by a large majority of the world’s governments, and with a clear road map for implementation, tobacco taxation should be highlighted in the Addis Ababa Declaration as an effective domestic tool for financing sustainable development.