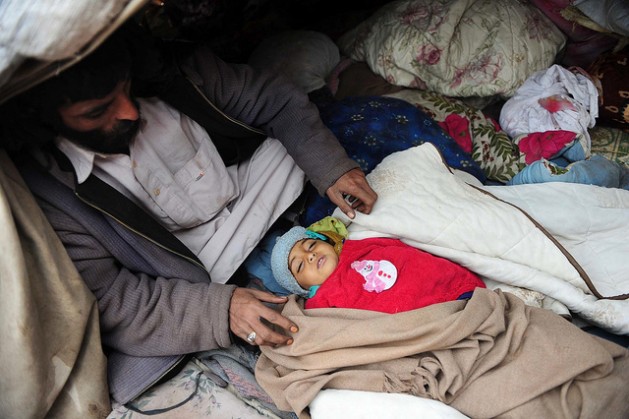 UNITED NATIONS, May 29 2015 (IPS) - The United Nations is not only overwhelmed by a spreading humanitarian crisis, largely in Africa and the Middle East, but also remains hamstrung by a severe shortfall in funds, mostly from Western donors.

In conflict-ridden South Sudan, a major crisis point, about 40 percent of the country’s 11.4 million population is facing “alarming levels of hunger,” according to the Rome-based World Food Programme (WFP).

"The system is overwhelmed and assistance often arrives too little and is too late." -- Shannon Scribner of Oxfam America

But lack of funding and shrinking access are compromising the agency’s ability to meet humanitarian needs.

Currently, the funding shortfall for WFP amounts to 230 million dollars for food and nutrition assistance.

Overall, the number of people requiring critical relief has more than doubled since 2004, to over 100 million today, according to the United Nations.

And these crises alone have left 20 million people vulnerable to malnutrition, illness, violence, and death, and in need of aid and protection.

“Yet there is not enough funding to meet the needs,” Shannon Scribner, Humanitarian Policy Manager at Oxfam America, told IPS.

She said the current humanitarian system is led by the United Nations, funded largely by a handful of rich countries, and managed mostly by those actors, large international non-governmental organisations (including Oxfam), and the Red Cross/Red Crescent movement.

This system has saved countless lives over the past 50 years and it has done so with very little funding, she said, and less than what the world’s major donors spend on subsidies to their farmers.

“However, the system is overwhelmed and assistance often arrives too little and is too late,” she pointed out.

So strengthening the capacity of local actors to prevent, prepare and respond to emergencies in the first place makes sense, as well as increasing assistance to disaster risk reduction (DRR) that can have a high rate of return in saving lives and preventing damage to communities and infrastructure, as seen in South Asia, Central America, and East Africa.

However, between 1991 and 2010, only 0.4 percent of total official development assistance (ODA) went to DRR, Scribner said.

Oxfam has recommended the panel looks at having U.N. member states make mandatory payments to humanitarian appeals – similar to what is done for U.N. peacekeeping missions, in which funding is received by mandatory assessments charged to member states.

Currently, the United Nations and its key agencies are funded by assessed contributions from the 193 member states and based on the principle of “capacity to pay”, with the United States the largest single contributor at 22 percent of the U.N.’s regular budget. All of these are mandatory payments.

Over the last decade, Ban said, the demand for humanitarian aid had risen “dramatically” amid an uptick in water scarcity, food insecurity, demographic shifts, rapid urbanisation and climate change.

“All these and other dynamics are contributing to a situation in which current resources and funding flows are insufficient to meet the rising demand for aid,” he declared.

“Humanitarian actors expected to stay longer and longer in countries and regions impacted by long-running crises and conflicts.”

Over the past 10 years, the global demand for humanitarian aid has, in fact, risen precipitously, he pointed out.

In Yemen, two out of three Yemenis needed humanitarian assistance before current crisis. And in both countries, the U.N. appeal is only 20 percent funded

Scribner told IPS one way to address the ongoing problem of assistance being too little and arriving too late is to invest more in humanitarian action led by governments in crisis-affected countries, assisted and held accountable by civil society, as it is often faster and more appropriate, and can even save more lives.

Yet, during 2007-2013, just 2.4 percent of annual humanitarian assistance went directly to local actors.

Meanwhile, the High-Level Panel on Humanitarian Financing will be co-chaired by the Vice President of the European Commission, Kristalina Georgieva of Bulgaria, and Sultan Nazrin Shah of Malaysia.

The Panel will also include Hadeel Ibrahim of the United Kingdom; Badr Jafar of the United Arab Emirates; Trevor Manuel of South Africa; Linah Mohohlo of Botswana; Walt Macnee of Canada; Margot Wallström of Sweden; and Dhananjayan Sriskandarajah of Sri Lanka.

The United Nations said the panel is expected to submit its recommendations to the Secretary-General in November 2015 which will help frame discussions at next year’s World Humanitarian Summit in Istanbul.