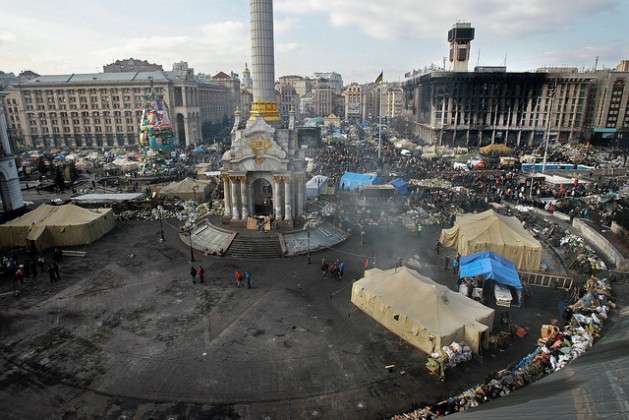 UNITED NATIONS, Jun 1 2015 (IPS) - The civilian population in Ukraine continues to suffer serious human rights abuses, intimidation and harassment by armed groups, including summary executions, as well as torture and ill-treatment by authorities in detention, according to the latest report from the U.N. Human Rights Monitoring Mission in Ukraine released Monday.

For more than a year, a climate of insecurity and impunity has prevailed in Ukraine, says the report, where at least 6,417 people have died in the conflict.

Accountability for gross human rights violations committed during the Maidan protests, during which at least 117 people died and more than 2,295 were wounded, and in the May 2, 2014 violence in Odesa, when 48 people died, is still pending.

The unrest began some 15 months ago in eight eastern and southern provinces of Ukraine. In several cities in the Donetsk and Luhansk regions, armed men, declaring themselves local militia, seized government buildings, police and special police stations in several cities of the regions, and held unrecognised status referendums.

In February 2015, after a summit hosted in Belarus, Ukrainian President Petro Poroshenko negotiated a ceasefire with the separatist troops. This included conditions such as the withdrawal of heavy weaponry from the front line and decentralisation of rebel regions by the end of 2015.

It also included Ukrainian control of the border with Russia in 2015 and the withdrawal of all foreign troops from Ukrainian territory.

However, the U.N. report says the current ceasefire in eastern Ukraine is not fully respected.

“The shelling has not stopped, nor have armed hostilities between Ukrainian armed forces and armed groups, meaning that civilians continue to live in fear,” the human rights office said in a statement released with its report, which focuses on the three months leading up to May 15.

“Even with the decrease in hostilities, civilians continue to be killed and wounded,” High Commissioner Zeid Ra’ad Al Hussein stressed. “We have documented alarming reports of summary executions by armed groups and are looking into similar allegations against Ukrainian armed forces.

“Millions of ordinary women, men and children in Ukraine have suffered tremendous hardship, violence and have been living in fear for more than a year now,” the High Commissioner said. “Too many have had their homes and livelihoods destroyed and their lives torn apart, with no sign of justice, accountability, compensation or redress.”

“I urge all parties involved in the hostilities to seek common ground, through sustained dialogue, to fully implement the 12 February Package of Measures, to end the fighting, and to ensure that all violations of human rights and international humanitarian law are investigated, regardless of the perpetrators,” he said.

More than 1.2 million people, who have been internally displaced since the onset of the conflict, also suffer from impeded access to healthcare, housing and employment.

Meanwhile, the proliferation of arms, the lack of job opportunities, limited access to medical care and psycho-social services for demobilised soldiers and a deep anxiety that the ceasefire may not hold have a serious impact on the population and the prospects for reconciliation.