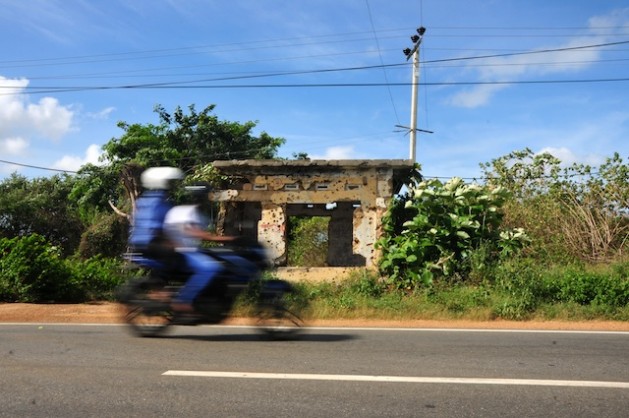 This bullet-pocked building, located in the Pallai area some 35 km south of Sri Lanka’s northern Jaffna town, stands in contrast to the newly paved road, freshly laid rail tracks and modern buildings cropping up around it. Credit: Amantha Perera/IPS

JAFFNA, Sri Lanka, Jun 26 2015 (IPS) - It is an oasis from the scorching heat outside. The three-storey, centrally air-conditioned Cargills Square, a major mall in Sri Lanka’s northern Jaffna town, is the latest hangout spot in the former warzone, where everyone from teenagers to families to off-duty military officers converge.

Once a garrison town with army checkpoints at every street corner, nervous soldiers armed to the teeth would patrol the streets around the clock tower. Claymore mine explosions were not unusual occurrences, and streets were deserted by dusk.

That was during Sri Lanka’s bloody civil war, which dragged on for nearly 30 years until the army declared victory over the separatist Liberation Tigers of Tamil Eelam (LTTE) in May 2009.

The country’s northern and eastern provinces, marked out by the LTTE as the site of an independent state for the country’s minority Tamil population, bore the brunt of the conflict. Whole towns and villages here suffered terrible losses, both in human life and in damages to lands, homes and infrastructure.

Both during the war years and immediately following, anyone traveling to this region could not but notice stark disparities between the war zone and the country’s southern provinces.

As you venture deeper into the north or further into the east, cars give way to bicycles and large buildings taper down into more modest dwellings.

Even six years after the fighting stopped, signs of devastation are everywhere: bus stops riddled with bullet holes and the remains of armored vehicles littering roadsides are not uncommon.

Internally displaced people and civilians and former combatants maimed during the conflict make up bulk of the population here, and post-war reconstruction is an unfinished task.

But in Jaffna, the cultural and political nerve centre for a majority of the island’s Tamil people, is slowly shedding its wartime scars. Young people, once prime targets for recruitment by Sri Lanka’s separatist group or at risk of being detained by government forces, revel in their newfound freedom, sometimes to the chagrin of anxious parents. Credit: Amantha Perera/IPS A man fishes in the Elephant Pass lagoon, the narrow waterway that connects the Jaffna Peninsula with the rest of Sri Lanka and the site of many bloody battles during the civil conflict. Much of the population here still relies on farming and fisheries for survival. Credit: Amantha Perera/IPS A former member of the LTTE, injured during the war, now runs a clothes shop in the town of Puthukkudiyiruppu in Sri Lanka’s northern province. Credit: Amantha Perera/IPS

The Cargills Square, a 3.7-million-dollar investment by Cargills (Ceylon) PLC – which operates the largest supermarket chain in Sri Lanka – opened in late 2013 and today, business is booming.

Its location, on a main road once infamous for skirmishes, assassinations and grenade attacks, now represents prime commercial real estate: the establishment is surrounded on all sides by clothing stores boasting the best of both eastern and western dress.

The smiling eyes and girlish laughter of young women trying on new dresses in street-side shops have replaced the sharp stares of soldiers, once visible through small windows in concrete bunkers surrounded by sandbags.

“Finally the city is thriving on its own potential, there is lot of talent and confidence here,” says Cargills Square Manager Samuel Nesakumar, referring to the district’s 600,000 residents.

Indeed the city, capital of Sri Lanka’s Northern Province, has not looked this vibrant in decades. While poverty rates in other parts of the former war zone are thrice and sometimes close to five times greater than the national average of average 6.7 percent, Jaffna is slowly closing this gap, and is even outperforming some districts in the south.

While many developmental challenges remain, external investments, including in infrastructure and from the banking and telecom sectors, combined with increased trade and internal tourism, means that this former war-torn territory is gradually pulling itself out of decades of despondency and getting back on its feet.

It is a success story in the making, but wide wealth gaps in various other districts in the north and east, as well as gaping developmental holes throughout areas once controlled by the LTTE, point to the need for even growth and equal distribution of resources throughout this country of 20 million people. A woman operates a poultry farm in her garden, in the village of Thunukkai in Sri Lanka’s northern Mullaittivu District. Absent a steady supply of jobs in more formal sectors, scores of women run cottage industries as a means of generating income since the end of the war. Credit: Amantha Perera/IPS Despite economic gains, poverty is still a major concern in Sri Lanka’s north, with one in every six persons living below the poverty line. Credit: Amantha Perera/IPS A mother and her son wait on the side of the road in Kilinochchi, once the site of heavy battles and now a bustling town on Sri Lanka’s major northern highway. Credit: Amantha Perera/IPS