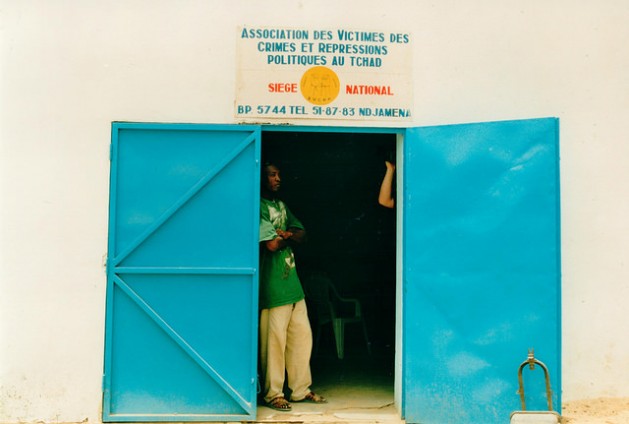 A scene from the mission of the International Federation for Human Rights (FIDH) to Chad to inquire into crimes committed by the regime of Hissène Habré in 2001. Credit: FIDH/cc by 2.0

DAKAR, Jul 21 2015 (IPS) - After years awaiting justice by a court of law, Chadian citizens packed the Palais de Justice in Dakar, Senegal, to catch a glimpse of Hissene Habre, president of the central African nation from 1982-1990 during which time his iron fist rule took between 1,200 and 40,000 lives, according to evidence compiled by Chadian and international rights groups.

Members of victims’ groups, whose efforts to bring Habre to court spanned over two decades, now strained to view this now slight figure dressed in white robes and a traditional white turban to cover most of his face.

The 72-year-old former strongman appeared unrepentant. As the proceedings began, he shouted “Down with imperialism! [The trial] is a farce by rotten Senegalese politicians. African traitors. Valet of America,” setting off a struggle between his supporters and alleged victims. At least half a dozen guards rushed to remove him. A small group of supporters was also removed.

When Mr. Habre refused to return to the courtroom, presiding judge Gberdao Gustave Kam warned he would be forced to attend on Tuesday. Over 100 victims are due to testify at the trial.

“We want to show the Chadian people, and why not all Africans, that no, you cannot govern in terror and criminality,” Souleyman Guengueng, 66, a former accountant who spent more than two years in Habre’s prison, said to Diadie Ba, a Reuters journalist.

“After 25 years, to see him again – it was a very emotional experience,” said Clément Abaifouta, president of the Association of Victims of the Crimes of Hissène Habré, who claims he was forced to dig graves for many of his fellow inmates. “But now I see that I am in the sun and he is in the shade. For us, the victims, this has been an important occasion.“

The tribunal is supported by the African Union but is part of Senegal’s justice system, making it the first time in modern history that one country’s domestic courts have prosecuted the former leader of another country on rights charges.

A successful trial would also make the case that African countries could try their own, rather than have the Western-led International Criminal Court (ICC) be the venue for trials of Africans.

The case against Habre turns on whether he personally ordered the killing and torture of political opponents and ethnic rivals. In 1992, the Chadian Truth Commission accused Habré’s government of up to 40,000 political murders, mostly by his intelligence police, the Documentation and Security Directorate. (DDS)

Human Rights Watch in 2001 unearthed thousands of documents in the abandoned DDS headquarters updating Habre on the status of detainees. A court handwriting expert concluded that margin notes on one document were Habre’s.

“Rarely do we find so much evidence of crimes,” said Reed Brody of HRW. “And these match the testimonies of the victims, day for day, word for word.”

“This is the end of a nightmare,” said Jacqueline Moudeina, the lead lawyer for the victims. “The fact that he is here and listens to victims speak of all the atrocities they suffered is already a great victory.”

Habré denies being responsible for hundreds of deaths.

The trial is expected to last several months.