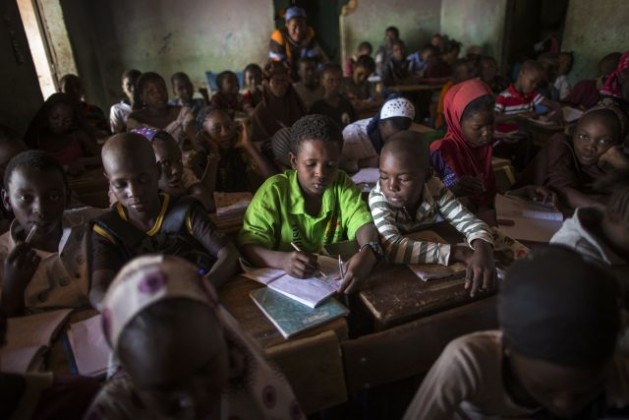 School children in a classroom in Gao, Mali. Advocates of a global tax body say revenues lost in tax havens could go to the building of much-needed schools, clinics, and roads and provide clean water and electricity to help combat poverty and boost development. Credit: UN Photo/Marco Dormino

UNITED NATIONS/ADDIS ABABA, Jul 10 2015 (IPS) - When the four-day-long international conference on Financing for Development (FfD) concludes in the Ethiopian capital later this week, one of the lingering questions in the minds of departing delegates may well be: did we really achieve anything concrete after years of negotiations?

As Oxfam International rightly points out, 2015 is a big year for major global conferences – on combating poverty, inequality, environmental degradation and climate change.

“Setting up a tax body is a crucial first step towards a better global financial system which works to uplift the majority and not further enrich the wealthy." -- Lidy Nacpil of APMDD

But in the first of these big conferences – in Addis Ababa, July 13-16 – decisions will be made about how money is delivered and spent by governments to tackle poverty and inequality.

One of the major sticking points during the negotiations in New York was the creation of a global tax body, including international tax reforms.

The final decision, however, will be made by ministers and high-level officials from 193 governments in Addis Ababa, the third in a series, the first FfD conference being held in Monterrey, Mexico in 2002 and the second in Doha, Qatar in 2008.

If you look at the big finance-related issues that are in the media these days, says Oxfam, “we read about economic crisis, government budget cuts, major tax dodging scandals, and countries in debt crisis. All of these are issues that fall under the financing for development agenda. “

Therefore, if the FfD conference is to be a success it could mean a rebalancing of power and a new cooperation with developing countries, which would get to have a voice in the international financial system.

The FfD conference could be a once in a decade opportunity to ensure that efforts to fight climate change, poverty and inequality are funded fairly.

“Unfortunately, current signs indicate that it will far from deliver on that promise. Negotiations (in New York) have seen more and more eroded from these ambitions,” said Oxfam in a statement released here.

McKinley Charles, media coordinator for ActionAid in Addis Ababa, told IPS its primary focus will be on tax reforms, more specifically the international tax body that is still currently being negotiated.

“We are working to improve and democratise the international tax body so that regulations can be put in place to stop tax dodging which robs developing countries of billions of dollars of revenue every year.”

These are revenues, she pointed out, that could have gone to the building of much-needed schools, clinics, and roads and provide clean water and electricity to help combat poverty and boost development.

“Addis is a big opportunity since it looks as if a decision on the international tax body will be made there,” she added.

Charles also said ActionAid, as part of its efforts, will be involved in a number of side events on tax justice, including panel debates.

ActionAid is also fielding some 12 tax policy analysts and campaigners from Europe, South Africa, Kenya, Zambia and Mozambique “to get our messages out to the policy makers and the public influencers.”

Asked whether the success or failure of the FfD will largely depend on tax reform, Alison Holder, Oxfam’s policy advisor on tax reform, told IPS the tax body issue will be a litmus test of whether this FfD conference is really about building a new common agenda and whether it is about real reform to address the international barriers that prevent developing countries from raising sufficient tax revenue.

The tax body raises the question of whether rich countries recognise that if the world is able to finance ambitious development goals, “then we need to see some shift in the balance of power”, she said.

“Without the commitment to create a truly global tax body, any outcome from these negotiations will continue to place all of the burden of financing for development on developing countries’ own doorsteps. They would be told to improve their own tax systems and live with current broken tax system.”

Holder also said rich countries are refusing to recommit to their decades-old promise to deliver 0.7 percent of their national income in aid – which would release an estimated 250 billion dollars a year.

“There is still a real chance that all of the months of negotiations on this FfD conference will come to nothing, and that no agreement will be forged. But this doesn’t have to be the way it turns out,” she declared.

Some of the world’s major multinational corporations are accused of shifting their profits out of countries where they make their money and hide it in tax havens, increasing their profits and leaving the poorest countries with an estimated loss of 100 billion dollars a year.

But the rich countries want to retain their status quo, where global tax rules are set within the Organisation for Economic Cooperation and Development or OECD, long described as a rich man’s club based in Paris.

The Asian People’s Movement on Debt and Development (APMDD), one of more than a thousand organisations which are part of the Global Alliance for Tax Justice (GATJ), said it is joining the call for the establishment of a global tax body.

“Civil society groups in Asia are criticising the United States and European Union for opposing a global tax body that would be more democratic than the OECD and G20, where rich countries dominate,” said Lidy Nacpil, coordinator of APMDD.

“Setting up a tax body is a crucial first step towards a better global financial system which works to uplift the majority and not further enrich the wealthy. It can level the playing field against tax evaders and provide more funds for developing countries,” she added.

Meanwhile, the European Union, the United States, UK, Germany, Netherlands, Finland and Sweden are expected to announce a new tax initiative, which aims to strengthen the capacity of developing countries’ tax authorities.

The initiative aims to double the collective overseas development aid available to help developing countries build more progressive tax systems and improve the collection of national taxes; support them in their efforts to clamp down on tax dodging practices by multinational companies; and increase their capacity to engage in global fora which deal with international tax reform.

Called the Tax Inspectors without Borders (TIWB) initiative, it will be jointly launched by the OECD and the U.N. Development Programme (UNDP) at a side event during the FFD3.

The TIWB programme aims to support 200 expert tax deployments between 2016 and 2019.

Less than 1 per cent of total aid budget is dedicated to support domestic resource mobilisation yet fairer and progressive tax systems are vital to reduce poverty and inequality. However, developing countries need more from Addis, she noted.

“Developing countries are not claiming the tax revenues they are entitled to because of a broken international tax system. This system allows multinational companies to cheat poor nations out of billions of dollars in taxes. Despite this, rich countries, led by the OECD, have denied them an equal say at the international negotiation table on new global tax rules.

“The Addis tax initiative includes the objective to increase the capacity of developing countries to negotiate global rules and to facilitate their presence at e.g. OECD-lead international tax meetings. This cannot replace the need for a truly inclusive global tax body where all countries can participate on equal footing to negotiate global tax rules. The same countries that initiated the Addis tax initiative have spent months blocking the creation of such a new intergovernmental tax body in Addis.”

Oxfam called on all countries to walk the extra mile in Addis and ensure that developing countries will be able to increase their tax revenues and build fairer tax systems at the national and global levels.

They should agree on the establishment of a U.N. tax body that will enable developing countries to claim their fair share of global corporate tax revenues, Holder declared.