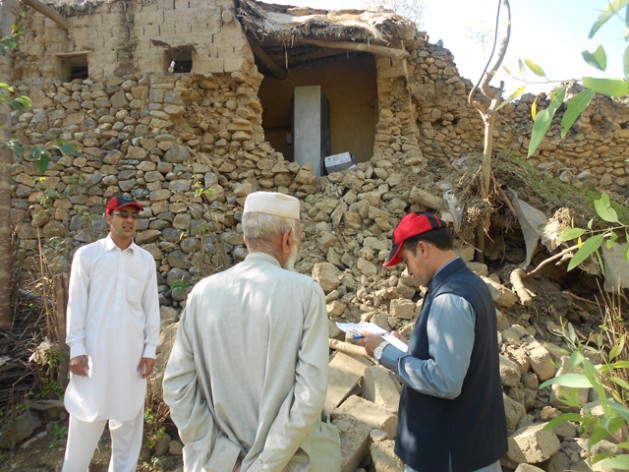 PESHAWAR, Oct 28 2015 (IPS) - “My grandmother rushed inside the room to save me. Roof suddenly collapsed and she died,” said 12-year-old Mushtari Bibi.

Bibi is one of the 1,950 people who received multiple injuries in Monday’s massive earthquake that jolted Pakistan and some neighbouring countries and caused heavy material and loss of lives.

“Our house is built of mud which cannot withstand the heavy earthquake. It was like a hell and I later I found myself in the hospital,” she said.

The Khyber Pakhtunkhwa (KP) is the worst-affected of Pakistan’s four provinces. Two hundred people died there, mostly in hilly areas due to landslides.

KP information minister Mushtaq Ahmed Ghani told IPS that the government had imposed emergency to cope with the situation.

It was the second bigger tremor Pakistan recorded in the past 10 years. In 2005, an earthquake killed at least 70,000 people and made another 3 million homeless.

The earthquake measuring 8.1 on Richter scale destroyed 5,000 houses and paralyzed life in major cities and towns and the people are still in grief.

“We are in deep panic and pass sleepless nights because of the high-rise buildings due to aftershocks,” 44-year-old Muhammad Wali told IPS. Wali, whose son was also among those killed in the tremor, says the people were extremely frightened as they feared more aftershocks.

Some people preferred to stay outdoors for fear of aftershocks.

KP chief minister Pervez Khattak told IPS that the government has declared emergency in hospitals and has alerted relevant departments to cope with the calamity. Special focus is directed at the northern districts of Chitral, Shangla and Lower Dir, which are the worst hit.

“These districts accounted for half of the human losses,” Khattak said.

Muhammad Akram a shopkeeper from Shangla district who was rushed to Peshawar, the capital of KP, for treatment, said he had never seen such a dreadful situation before.

“The tremor shook all the buildings and frightened us. The children who survived the mayhem are still in shock,” he says.

Akram, a roadside vendor, said that he ran for shelter and half of his body was buried when a wall collapsed.

“The people were crying endlessly when the earthquake occurred. Children were weeping. Women came out of homes and ran for open spaces,” he said. It is highly fortunate that the tremor occurred in mid-afternoon, which likely reduced the loss of life because people were busy outside their homes in offices, workplaces and markets, he added.

“Some taller buildings were swinging and we were in deep fear that those would crash and we would all be killed,” he said.

Chief of Army Staff General Raheel Sharif arrived in Peshawar and directed all troops to go to the remotest areas to ensure relief of every affected family and individual and extend maximum help.

Sanaullah Shah, a resident of Swat district, told IPS that that situation was horrible and dreadful. “I have never witnessed such a severe jolt as there was a slight vibration initially that was followed by the earthquake of very high intensity. Everything was in motion,” Shah, a university student said.

Dr Ghulam Subkhani, medical director of the Lady Reading Hospital, where most of the injured persons were brought for treatment, said that several women fainted after they got frightened but they were sent home after first-aid.

“In many places, people sustained injuries after stampede in multi-storey apartments after the earthquake,” he said.

Aslam Khan, a teacher at the University of Peshawar, said that he was busy in class when he felt the jolt and soon he saw terrified people coming out of classrooms and starting reciting the verses from the holy Quran to seek forgiveness and invoke the mercy of Allah to save them from the calamity.

Khan said the attendance at the university remained thin after the tragedy because of the fear and the students and teachers were gripped by panic.

Celebrated cricketer and now head of the Pakistan Tehreek Insaf (Movement for Justice) party, Imran Khan, also visited Peshawar and other parts of the KP to supervise the relief and rescue activities.

“It is a matter of grave concern that people don’t follow building-code at the time of constructions which cause problems whenever tremors take place,” Khan told reporters in Peshawar.

In future, the government will put in place strict measures to ensure that building codes are followed, he said.

KP Director-General Health Dr Pervez Kamal said the situation was under control. “Doctors and medical teams have been sent to the most-harmed areas of the province to extend medical assistance to the injured people,” he said.

Some 300 patients were admitted at the hospitals due to head injuries or fractures of their bones, he said. Women and children were among the people who received multiple injuries, he said.