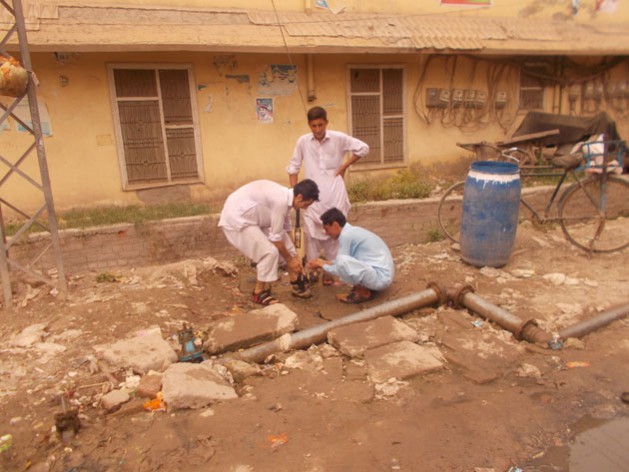 A group of boys use water from a leaky pipeline in old city of the Peshawar, the capital of Khyber Pakhtunkhwa, one of the Pakistan's four provinces where authorities attribute shortage and contamination of water due to lack of awareness among the people. Credit: Ashfaq Yusufzai/IPS

PESHAWAR, Pakistan, Nov 15 2015 (IPS) - “We have to purchase water from the municipalities for our daily use. The water column has gone too deep and it is hard to pump out the commodity,” said Muhammad Shakir, a resident of Hayatabad, an upscale town in Peshawar, the capital of Khyber Pakhtunkhwa (KP).

The situation isn’t showing any sign of improvement and is going from bad to worse, as increasingly the children don’t to schools and colleges due to non-availability of water, he says.

Shakir, a businessman says the matter has been reported to the government but to no avail. “At times, we don’t have clean water for ablution,” he told IPS.

The Pakistan Council of Scientific and Industrial Research (PCSIR) has warned about rapidly depleting water resources in Khyber Pakhtunkhwa as well as in the nearby Federally Administered Tribal Areas (FATA).

“There’s an urgent need to search for alternative water resources. The water surface is being covered with metals due to which the availability of the commodity growing scarce,” said PCSIR’s principal scientific officer Jahangir Shah.

People have been using hard water in most parts of the KP and FATA because it passes through underground rocks, he said.

Reduction of water resources is a huge problem as there’s no government check to prevent misuse of water through management, he said. In the process, the people are facing the problems of diminishing water quality and quantity.

“We are taking measures to ensure the people get uninterrupted and clean water supply in all health facilities,” KP director-general health Dr Pervez Kamal told IPS. The government is also starting an awareness campaign to scale up public awareness about the diseases caused by contaminated water, he said.

The KP public health engineering department admits the people are experiencing water scarcity and contamination not only hospitals but also in schools, colleges, offices and houses as water management is becoming a major crisis.

“Laboratory reports have found bacteria in water in different districts of the province as well as FATA,” Eng. Farooq Ahmed said.

The water distribution system is faulty. Clean water supplies from the main tube-wells get mixed with raw sewage due to ruptured pipes. “People don’t clean storage tanks which are supposed to be cleaned after every three months,” he added.

The people were in the habit of pumping out water the major supply line by puncturing the pipes and then leaving those uncovered, which paved the way for bacteria to merge with water. People often complained of lack of water and contamination, Ahmed said.

“The government has started chlorination of all the tube-wells in KP and FATA,” he says. We are also asking the people to clean their water-tank every four months,” he said.

Professor Noorul Iman, a local physician at the Khyber Teaching Hospital, Peshawar, told IPS that 45 per cent of the annual deaths in KP and FATA are caused by unhygienic water. “The quantum of water-borne ailments is increasing. The people should use water purification pills to stay safe from diseases,” he said.

Nearly half of the beds in hospitals are occupied by patients suffering from gastroenteritis, diarrhoea and other diseases caused by the consumption of untreated water, he said.

The situation in slums is even worse as people living in them often have to fetch water from distant places.

“We have to bring water from the mosque which is located 500 meters from our home. The water we bring is not sufficienet for our 10-member family,” Anwar Shah, an Afghan refugee who lives in Kacha Garhi locality, near Peshawar told IPS.

Shah noted that two of his sons are exclusively responsible to provide water to the home. “Sometimes, we have to travel to places as far as 1km once the tube-well in the mosques goes out of order,” Shah said.

The situation with regard to clean water in FATA is dire because the main water tanks remain open and birds such as crows sit on their edges and drop in rotten pieces of meat, Shafique Ahmed a FATA-based engineer told IPS.

A water-tank should be chlorinated every three months to make water consumable for human, he said.

In majority areas of the seven tribal districts of FATA, “People in many areas suffer from teeth problems due to presence of the toxin fluorine in their water. In Khyber Agency, Mardan etc., every 10 person develop yellowish teeth and the stains remain forever,” Dr Ghulam Rasool, principal at Khyber College of Dentistry, said.

Excessive consumption of fluorine also leads to other health problems, he said. “Most of the residents don’t know about and have consumed fluorine-contaminated water. Children are the worst sufferers as their teeth start decaying sooner than normal people,” he said.

KP’s Director-General Pervez Kamal is worried about the appearance of arsenic, a carcinogenic agent, in the water.

“We have been asking the people to boil water before use but most of the population is poor and illiterate,” he said.

PCSIR’s Jahangir Shah fears a further scarcity of water in view of rapid depletion of resources. “In next 10 years, we can face shortage if the situation remains unchanged. The government should adopt best water management practices,” he said.