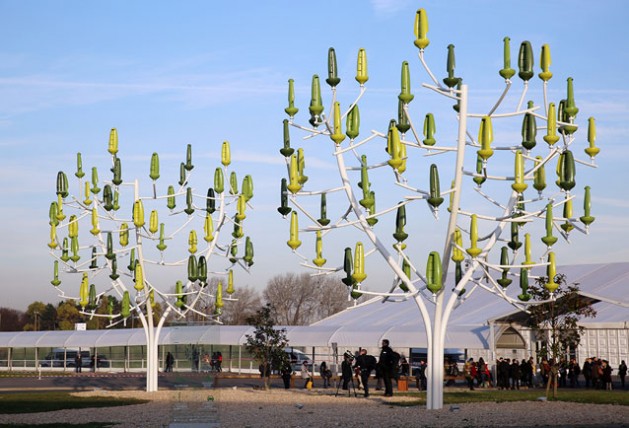 At COP21 entrance are situated the ‘Wind Trees.’ Each “aeroleaf” generates energy by harnessing the power of the wind. Credit: IISD.ca

PARIS, France, Dec 10 2015 (IPS) - As the climate conference advances into its final stages amid the colossal challenge of having 195 countries agree on a single and unified global policy on climate change, urban areas appear a a different issue but complementary solution for all.

Cities are undeniably one of the key players in the global warming arena, being the leading source of greenhouse gases, of population settlements and of energy consumption, grouping three highly interconnected driving factors of global warming. As humanity walks deeper into the 21st century their relevance will only grow.

Cities and municipal level government offices have proven to move faster than the international country-driven negotiations in addressing climate change, as international alliances both inside and outside the UN umbrella show.

However, they don’t live in another world and their solution portfolio is intertwined with the fate of the 2015 UN Climate Conference (COP21).

“The way decisions will be made as part of the agreement, including the funding and the agenda of solutions, all these decisions will be implemented at that sub national level so they are key to success,” said French French Minister of Ecology, Energy and Sustainable Development Ségolène Royal.

The minister spoke during the presentation at COP21 of a five-year plan to raise action from cities and regions spanning across five continents representing almost one-fifth of the world’s population.

The plan was launched under the Lima to Paris Action Agenda (LPAA) platform, a mechanism created during last year’s climate conference as a way to include so-called non state actors into the search for the climate solution.

Its urban workstream currently includes over 2200 settlements around the world, from Mongolia’s capital Ulan Bator to globalization strongholds like New York and London and adds to previous efforts like C40.

The United Nations Human Settlements Programme (UN-Habitat) says urban areas are responsible for up to 80 per cent of global greenhouse gas (GHG) emissions and by mid century, they are estimated to hold about seven of every 10 human beings.

Tokyo, for instance, emits as much as 62 million tons of greenhouse gas (GHG) emissions per year, which accounts to the equivalent of the 37 countries least polluting countries in Africa.

Their transition to a greener economy is also an economic necessity. If the world keeps a business-as-usual high-carbon economy, about 90 trillion dollars, or an average of six trillion a year, will be invested in infrastructure in the world’s cities, agriculture and energy systems over the next 15 years, according to the New Climate Economy report “Better Growth, Better Climate”.

These and other low-carbon local decisions are going to be taken by country delegates at the climate conference, but the actual heavy lifting will come from sub national efforts.

“COP21 is the first time that cities will have their voices fully recognized at a global UN conference on climate change and the first time mayors are gathering in great numbers to demand bold action,” said UN Special Envoy for Cities and Climate Michael Bloomberg during the Cities for Change, a parallel event in Paris.

The conference comes at a crucial moment. Earlier this year, Paris suffered from haze masking city’s landmarks like the Eiffel Tower and this week Beijing raised a “red alert” warning over smog and the city has gone on a shutdown to protect its people, so mayors and city planners are moving fast.

The city of Ghent in Belgium has implemented projects that address climate change. Speaking at a side event in COP21 called “Global Covenant of Mayors: Towards Carbon Neutral and Inclusive Cities,” the city’s mayor Tine Heyset emphasized climate policies at the local level.

And it’s not just developed cities that are making bold steps of climate action. Mayor Josefa Errazuris of Chile’s Providencia also shared about their city-wide projects such as changing street lights to LED and having a target of 50 per cent carbon reduction of GHG based on 2014 levels.

“In order to protect our commune and the sustainability of our territory, we have efforts to include climate change as part of policies,” she said.

But urban areas also have to carry a heavy burden. During her intervention, minister Royal highlighted the double nature of the cities as “both places with highest greenhouse gases but also where you need concrete and urgent action” to address the negative impacts of climate change.

A 2013 paper published in Nature showed that without major new defences or emissions cuts, the global costs of flooding in cities could rise to one trillion dollars a year in 2050 and the negative effects span to all corners of the world.

As poverty hotspots around the world, cities lack the necessary resilience to withstand climate change and its impacts, which usually harder on the most vulnerable among communities and settlements.

The 2014 World Urbanization Prospects revealed that 828 million people are currently living in slums, as satellites or metropolis in all continents, a number enlarged by 6 million on a yearly basis.

But it’s not only the world’s most vulnerable. A paper published in the Proceedings of the National Academy of Sciences shows that if global warming continues as it is now, half the homes in 21 cities in the United States will be underwater by 2100.

COP21 is scheduled to deliver a final text by Thursday noon, Paris time, in which all 195 countries that signed to the UN Climate Convention agree on a global plan to combat climate change.