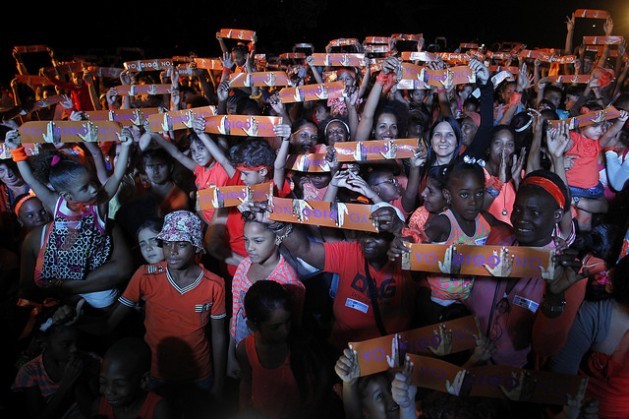 Members of the Red de Artistas Únete artists network, which organised a “no to gender violence” flash mob on the International Day for the Elimination of Violence Against Women in Havana, Cuba. Credit: Jorge Luis Baños/IPS

HAVANA, Dec 31 2015 (IPS) - Activists and researchers dedicated to the study of gender violence in Cuba insist on the need for a comprehensive law to protect the victims and prevent the problem, which was publicly ignored until only a few years ago in this socialist Caribbean island nation.

Legislation is necessary “because even when the ideal in our society is justice and equality, there are social expressions of violence against women that have been kept invisible, which contributes to the impunity enjoyed by the abusers,” psychologist Valia Solís told IPS.

Solis, with the non-governmental Christian Centre for Reflection and Dialogue – Cuba (CCRD), based in Cárdenas in the western province of Matanzas, added that the law should not be limited to providing for prison terms, because violence requires a preventive approach in order to keep the behavior and its consequences from getting worse.

Several articles of the Cuban constitution, the penal code and other legislation refer to gender equality. But there are no specific laws aimed at fighting sexist violence, or adequate instruments to protect the victims.

People who face gender-related mistreatment are “in a state of vulnerability, and a law could attenuate this,” said Aida Torralbas, a professor and researcher at the university of the eastern province of Holguín, who said the phenomenon is largely unnoticed and surrounded by impunity.

In her view, although a punitive response is not the best option, because it addresses the problem after the act, it is important because it recognises gender violence as something that must be punished and that hurts the integrity of another person. Torralbas concurs with other academics that education is an essential factor in combating the problem.

“That’s why a law of this kind must also take into account the possibility of educating society in non-patriarchal and non-sexist values that modify ways of thinking and acting,” she said. The expert also argued that it is important to strengthen training of judicial system and law enforcement personnel with respect to how to deal with these issues.

“It’s a fact that the police themselves do not know how to handle these questions,” Mercedes Abreu, a social worker with the Integral Neighbourhood Transformation Workshop (TTIB) of Pogolotti, in the Havana district of Marianao, told IPS.

The TTIBs were created in 1988 to carry out social work in poor neighbourhoods in the capital, and are under municipal government administration.

“Women themselves often do not know that they’re the victims of violence in the family, in the workplace, in the community. Ignorance leads us to turn a blind eye to this problem,” said Abreu, who also said the Cuban population “has very little legal awareness.” From left to right: Yamila Delgado, Nidia Tamayo, Lidia Santos and Alina Sabor, victims of domestic violence who belong to the group “Women with a purpose”, in the offices of the Integral Neighbourhood Transformation Workshop (TTIB) in the Libertad neighbourhood in Havana, Cuba. Credit: Jorge Luis Baños/IPS

The TTIBs and civil society organisations have helped pull out of the closet a reality that is the product of Cuba’s patriarchal culture, which runs counter to the progress made towards equality such as equal wages for men and women, the massive incorporation of girls and women in education and the labour market, and free, universal access to abortion on demand.

For example, since 2007, the “Oscar Arnulfo Romero” Centre for Reflection and Solidarity (OAR) and other groups have been organising an annual National Day for Non-Violence Against Women, to coincide with the 16 days of global activism between Nov. 25 and Dec. 10.

Without underestimating the impact achieved by this activism, Abreu believes the question of violence must be addressed continually from different angles. “We can’t just focus on it during the week of activism against violence. Progress can’t be made this way,” said the social worker, who has worked for several years in a low-income neighbourhood.

In her view, the efforts must involve families, schools, the family doctor, social workers, the Federation of Cuban Women, decision-makers, the media, churches, activists, lawyers, judges and the police.

Elaine Saralegui, a theologian and pastor of the Metropolitan Church in Cuba, in the western province of Matanzas, told IPS that “violence has to do with the established order and with the relations between people or groups in unequal positions of power.”

She said laws were needed to protect and promote free expression of gender identity. “When we talk about gender, people generally think about men and women, and we tend to ignore other expressions of gender that don’t fit in the heteronormative mindset,” she said. Lawyer Indira Fajardo speaking during the event “You are more: Reflections on gender violence in Cuba” in the Multifactorial Panel during the National Day to Eliminate Violence Against Women 2015, whose theme was “Prevention of and attention to gender violence as a health, social and rights problem” in Havana, Cuba. Credit: Jorge Luis Baños/IPS

She said the country needs “laws that can offer legal protection across the board, explicitly, where each one of the faces of the people hurt by heteronormativity, patriarchal sexism and gender violence are taken into consideration.”

“So we’re talking about heterosexual women, but also about people with different sexual orientations and gender identities,” she said.

In 2012, the first National Conference of the governing Communist Party of Cuba (PCC) included the rejection of gender and domestic violence in its objectives, in what was seen as an important official recognition of the issue.

The PCC is organising its seventh congress for April 2016, with an agenda that includes assessment of compliance with the agreements reached at the party’s sixth congress and First National Conference. The last congress, in 2011, approved a programme of reforms to update the country’s socialist model of development.

Next year, the governmental Women’s Studies Centre and the National Statistics and Information Office plan to carry out a national survey on gender equality, although it is not clear whether gender violence will be included in the questions.

Meanwhile, 14 countries have created a separate criminal classification for femicide – gender-motivated murders – and two have established that it is homicide aggravated by gender hostility in their legislation.